What could an Olympic champion speed skater, a part-time construction contractor, and a diabetes-inducing 32-oz soft drink have to do with bicycling? Those elements are the beginnings of the 7-Eleven team story, as told in great and engaging detail in the book, Team 7-Eleven: How An Unsung Band of American Cyclists Took on the World - And Won, by Geoff Drake with Jim Ochowicz (2012, Velopress). 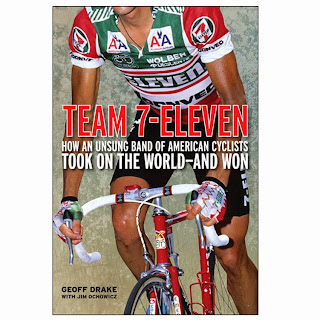 With winter weather making it difficult to get out for a bike ride, I've instead been enjoying my time with some some bike-related reading. The Team 7-Eleven book is one I recommend. For anyone under the impression that American bicycle racing started with Lance Armstrong (or for anyone under the age of 30) Team 7-Eleven gives a memorable picture of what bike racing looked like from an American perspective in those years long before Armstrong, before EPO, and before bike racing could even be seen on American television -- in other words, when many Americans barely knew such a sport existed. And for those of us who remember those days, the book is an enjoyable reminiscence of the beginnings of the American presence in European professional bike racing.

Here is an excerpt:

"Professional cyclists in Europe came up through a series of amateur teams, eventually earning a coveted spot on a prestigious international squad like Renault-Gitane or TI-Raleigh. But to become a pro in America, you didn't need a team. In fact, you didn't even need a bike. You only needed to fill out a one-page form. Nowhere on the form were you required to state your qualifications, race wins, or years of experience. . . For a fee of $35 and the cost of a stamp, you could become a pro cyclist.

"This document would state, in essence, that you were eligible to compete in the Tour de France. That is, if you could find a team willing to have you."

I was teen-aged kid, just getting into bikes when the 7-Eleven team was starting out in 1980, so for me there was a good bit of nostalgia reading about and remembering events such as the Coors Classic stage races, the '84 Olympics in Los Angeles, the first American team to race the Tour de France -- the same year that Greg LeMond became the first American to win that race. With so much input from team founder and director, Jim Ochowicz as well as many members of the 7-Eleven team, the book gives readers a behind-the-scenes look at events we were just barely able to follow in the scanty press that was afforded to the sport at the time those events were playing out.

The book starts before the beginning -- focusing at first on two of the people who made the 7-Eleven team a reality: Ochowicz, who was splitting his time in Milwaukee between speed skating, bicycle racing, and construction work; and Eric Heiden, winner of 5 gold medals for speed skating in the 1980 Lake Placid Olympics -- who wanted to put down his skates to focus on bicycle racing. Ochowicz and Heiden were both part of what the book calls the "Bike and Blade" culture of the midwest -- a culture that would form much of the basis of what would soon become the 7-Eleven team.

With that desire to form a bike racing team, Ochowicz had his first rider -- one who already had the fame to give the dream some credibility, and one whose coat-tails he could build a team around. Next he needed a sponsor. Enter Southland Corporation -- parent company of the 7-Eleven convenience store chain, famous for its 32 oz (later 64 oz!) "Big Gulp" sodas and frozen Slurpees.

In 1980, Southland had just expressed a desire to get involved as a sponsor for the '84 Olympics. The book describes a funny anecdote where Peter Ueberroth, manager of the LA Olympics, suggested to Southland Chairman John Thompson that they put up the money for the Olympic Velodrome. "To a large degree, the history of U.S. cycling hinged on the response to this question. But John Thompson, who didn't know a track bike from a tea kettle, didn't hesitate a second. He said yes." When Thompson reported back to his brother Jere, the company president, what he had just committed to, his brother's only question was, "What's a velodrome?"

Sensing that the time was right, Ochowicz approached the Thompson brothers with the idea of sponsoring a Pro-Am bicycle team. They agreed, and for the next ten years, they would give the 7-Eleven team an unprecedented amount of support -- tremendously bolstering American cycling at the same time. Not only was there the men's road racing team, but there was also a track racing team and a women's team.

One thing I come away with after reading the story is just how unlikely it all was. The Thompson brothers, like most of the customers in their convenience store chain, knew nothing about bicycle racing -- yet they supported Ochowicz and the 7-Eleven team every step of the way -- even as they made the leap into Europe.

Team 7-Eleven is full of information and anecdotes about the team's early years and early stars -- people like Davis Phinney, Ron Kiefel, Jeff Pierce, and Jeff Bradley. The book describes those first few years when the team focused on the American criterium circuit and was a dominating force. Then there is the preparation for the '84 Olympics, where the U.S. won nine medals in six events. Six 7-Eleven team members (including women's team member Rebecca Twigg) were among the medalists.

My favorite parts of the book are the chapters about the move to European racing, where the team really shook up the European sensibilities. Rather than adapt to the new culture, they brought their own with them. They played loud music. They had a female soigneur. They ate Mexican food and McDonalds -- in Italy and France! There was no mistaking that the Americans had arrived. Readers will come away with the impression that the 7-Elevens were in some ways unprepared for the shift and the hardships of European racing, which was so very different from American-style racing. Suddenly, instead of being the "big fish" and dominant force -- they were just a small team, a bit naive, with a lot of room to grow. But somehow through dumb luck and perseverance they managed to gain respect.

In those first seasons of European racing, the team had some amazing successes, and probably as many miserable setbacks. In their first Giro d'Italia, in 1985, they had stage victories by Ron Kiefel and Andy Hampsten (on loan that season from the U.S. based Levi's/Raleigh team), while Eric Heiden won the InterGiro sprint competition. But they also were involved in many crashes (and took the blame for most of them).

For many readers, the story of the first U.S. team in the Tour de France will resonate. I remember trying (with great difficulty!) to follow the race in 1986, so the behind-the-scenes look and first-hand accounts are enjoyable to read. The 7-Eleven's first Tour de France was a great example of highest highs and lowest lows. Probably setting some kind of record, the team started their tour by going from first to worst in a single day. A rare 2-stage day saw 7-Eleven's Alex Steida, from Canada, sweeping all the race's jerseys in the morning, then losing them all and finding himself in danger of being completely eliminated during a miserable team time trial in the afternoon. Davis Phinney got an impressive stage win, then crashed out a few days later. By the end of the race, half the team had either crashed out or gotten violently ill and had to withdraw. But the team had made history -- along with Greg LeMond who, as part of the French powerhouse team La Vie Claire, became the first (and officially the only) American to win the Tour.

Another highlight of the book is the story of Andy Hampsten's heroic win in the 1988 Giro d'Italia. Hampsten essentially sealed his victory in a freakish snowstorm over the Gavia pass, and became the first and only American to win the Giro. The book's account left me with the impression that it was amazing nobody died in the stage -- but also is a testament to how far the team had come.

The book's final chapters describe how Southland eventually had to end their sponsorship after 10 years and how Team 7-Eleven became Team Motorola in 1990. But those ten years did so much for American cycling.

Even before Lance Armstrong's very public downfall, doping cast a shadow over professional bike racing -- making it hard for me to fully enjoy the sport nowadays. While I watched with excitement the impressive victories of Bradley Wiggins in 2012, and Chris Froome in 2013 -- I still have to wonder when the other shoe will drop. While some want to claim the sport is "clean" now, I just don't know. But I also feel bad for someone like Froome, who appeared so dominant in his win -- but had to answer questions and skepticism every step of the way. Given that shadow over the sport, it was refreshing to read Team 7-Eleven and revel in stories of racing in what can only be described as a simpler, more innocent era.
Posted by Brooks at 12:15 PM