People are going to think I have a fork crown fetish by the time I'm done with this thread. I really don't! But when you get a contribution like the one I got recently, you run with it. American frame building master, Peter Weigle, shared a collection of his fork crowns with me, and now I need to share them with readers of The Retrogrouch Blog.

Unless you only discovered bicycles yesterday, you know that the New England-based builder has one of the best reputations for craftsmanship and artistry in the bicycle business. Weigle's experience goes back to the early 70s when he was hired by Witcomb USA cycles, which was an American operation of the British Witcomb brand. People familiar with that history know that this was where other frame-building legends Richard Sachs and Chris Chance also got their start. Weigle was trained at Witcomb's British factory, then built frames for their Connecticut factory until they closed up shop in '77. After that, he set up his own shop, still there in Lyme, Connecticut.

Over the years, Peter Weigle has evolved from building primarily racing and sporting bikes, some mountain bikes in the early 80s, and touring bikes. His emphasis in the last few years has been on randonneuring bikes -- inspired by the great French constructeurs of the golden age. Peter told me that the randonneur style has given him a lot of inspiration -- trying to take what's classic and beautiful, but to use modern materials and do something original and unique.

Take a look at a sampling of some really gorgeous work: 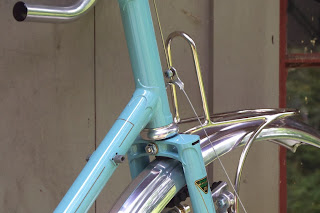 Here is a look at the finished crown from above. In addition to the modifications already pointed out, you can see here that a decorative slot was added just above the point on the shoulders. There's also a beautiful hand-made rack that mounts to the cantilever brake bosses.


As much as I've shown here in this post, there is a lot more to see. After all, the man has been building beautiful bikes under his own name for over 35 years (and just over 40 years overall). The photos above, and many (many!) more, can be seen on Peter's Flickr pages. Let me give a big Thank You to Peter for taking the time to share these and describe them for me and for the readers of The Retrogrouch.
Posted by Brooks at 11:22 AM