With our current outside temperature hovering somewhere around 1º fahrenheit, I can't help but think back to better riding time and memorable rides. Perhaps ironically, the place that comes to mind right now is Alaska. Yes, Alaska.

This past summer, my family and I were fortunate enough to take a trip to Alaska -- one of those two-week trips that consisted of a cruise up the coast, followed by an overland trip into the state's interior. It wasn't the kind of trip where I'd expected to be able to do much (if any) bike riding, and I didn't have a bike that I would be able to bring with me on the trip. But at a couple of our stops during the trip, I found bike shops that had rental bikes and guided tours available, so I took advantage of those where I could. I was glad I did.

The first thing anyone would be struck by in Alaska is the rugged beauty of the place. Big surprise there. But the surprise for me was what a great place it is for cycling. Depending on what part of the state a person is in (it's more than twice the size of Texas, after all), there may only be a four-month long riding season. In Fairbanks, for instance, it often starts snowing by the end of September, and the snow pack doesn't start melting typically until May. Winter temperatures there frequently are well below zero. Anchorage, further south and near the Pacific, is a bit more temperate. On the southern panhandle, things can be damp, but downright mild.

But despite the shorter riding season, Alaska has done a lot to promote bicycling. Anchorage, for instance, has a pretty extensive bike lane network, and has even cracked the top 50 in Bicycling Magazine's list of best cities for bicycling. But bike lanes and separated bike paths were all over the state. It is apparently state law there that any new road construction, or any major renovation of an existing road, must have provisions for bikes -- in some cases, it means an adjacent lane for bicyclists. In other cases, it is a separated path running near the main roadway. I was impressed. While I was in Fairbanks, I noticed a lot of the businesses had bike racks outside -- many of which were full of bikes which tells me that they have a fair number of people actually using their bikes for commuting, etc.

For one of my bike rides, I was in the city of Juneau, in the southern panhandle part of the state on the Gastineau Channel. Because of its proximity to the Pacific, the climate there is surprisingly mild. It does, however, rain a lot -- typically more than 200 days per year. In Juneau I was able to rent a bike and go with a small guided group out to the Mendenhall Glacier. It was a nice ride -- partly on the road, partly on some trails through the Tongass National Forest. Because of the bike trails, we were able to get to a part of the Mendenhall Glacier Lake that would be difficult to access by car -- so while most tourists were taking tour buses to the main visitor area and observation point, we on our bikes were able to get a quieter, less crowded view and access. That was without a doubt the way to go. Our ride ended at a waterside tavern in Juneau where we got to sample some Alaskan-brewed craft beers -- a nice finish.

Another ride I was able to take was in a small town called Skagway where they had a pretty cool little bike shop called Sockeye Cycle Co. (Salmon fishing is a pretty big industry in that part of the state). The bike shop offered rentals and a couple of different guided tours. While in town, I had time for a guided ride down the White Pass summit. It turned out to be one of those mostly down-hill rides where they take you to the top of the mountain in a van and you ride back down the pass and back into town. On that day, the top of the mountain was enshrouded in clouds, where it was very cold and damp. Visibility was pretty limited for a while, but there was still some pretty incredible scenery.

Despite being the end of June, there was still a lot of snow and ice melting from the top of the mountain, so there were icy cold waterfalls pouring down within easy reach of the road.  With all the mist, the road had an eerie, mysterious look to it. 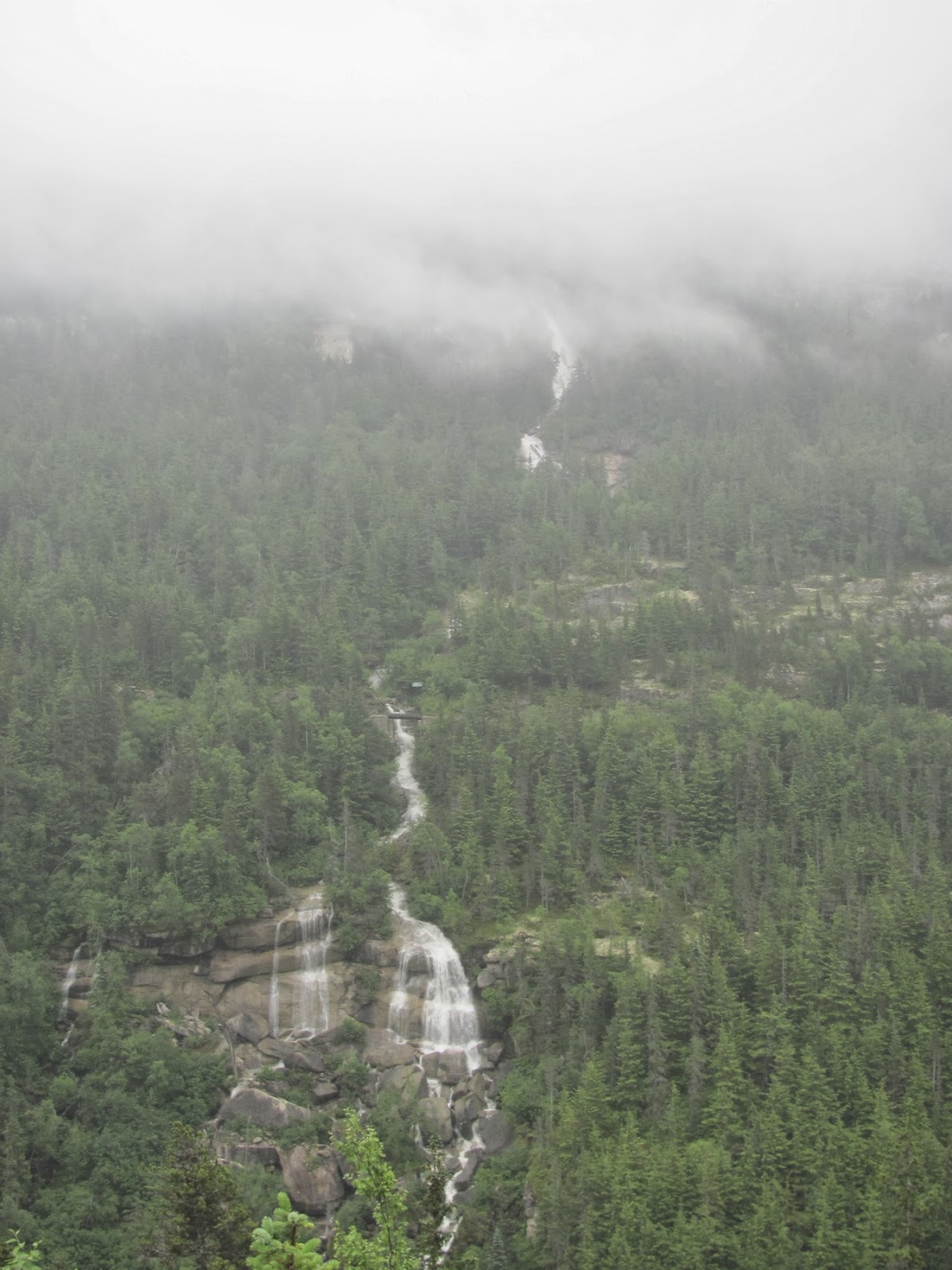 Even though I thought I was dressed pretty well for the weather, I wasn't quite prepared for the temperatures at the top of the mountain. For the first couple of miles I found my teeth chattering and my fingers getting numb. Luckily I was able to borrow a spare pair of warmer gloves from the tour leader. The further we made our way down the pass and out of the clouds, things warmed up to match my clothing choice.

Being that I was completely unfamiliar with the area and had only limited time for my ride, I felt like taking the guided tour was probably the best choice. On the other hand, while a mostly downhill ride is probably very enticing to some, it wasn't quite as much of a challenge as what I'm more inclined to take. Seriously, I kept finding myself wanting to turn around and ride up the pass before coming back down.

At one point I asked the ride leader if they had any group rides going up the mountain instead of just down. "Tourists never want to go UP the mountain," he said. "Well I do!" I replied. Anyhow, while the guided tour was really nice and I definitely enjoyed it, if I had it to do over again, I might have just rented a bike and asked for a map and some route suggestions. If any of my readers ever get to take a trip to Alaska, keep that in mind.


I don't know if I'll ever get another opportunity to get back to Alaska, but I did make a big decision after my trip ended. I decided I need to get a bike that I can travel with, because it always happens when I'm traveling far from home -- I find myself wanting to explore wherever I am by bike, and renting bikes can sometimes be a hit-or-miss proposition. Rental bike fit and quality can be pretty iffy. The bikes I was able to rent in Alaska seemed to be maintained well, but the fit of one of them was just so-so -- I had to raise the seat post up to the limit, which got my saddle height in a good spot -- but then the relationship between the saddle and the bars was way off from what I'm used to. Also, a lot of places that rent bikes don't typically rent out road bikes (overwhelmingly my own preference), but more likely have rental fleets consisting of mountain bikes or so-called "hybrids."

After getting home, I looked into some travel-ready road bikes and after doing a lot of reading I made a decision and placed an order for one. I won't go into details in this post, but after it arrives, I'll definitely devote an article to the subject.