Saturday was a gorgeous day to take my 1980 Mercian Strada Speciale out for its "maiden" ride -- well, maiden ride for me, anyhow. Temperature outside was in the upper 70s, with low humidity, and stunningly clear skies. 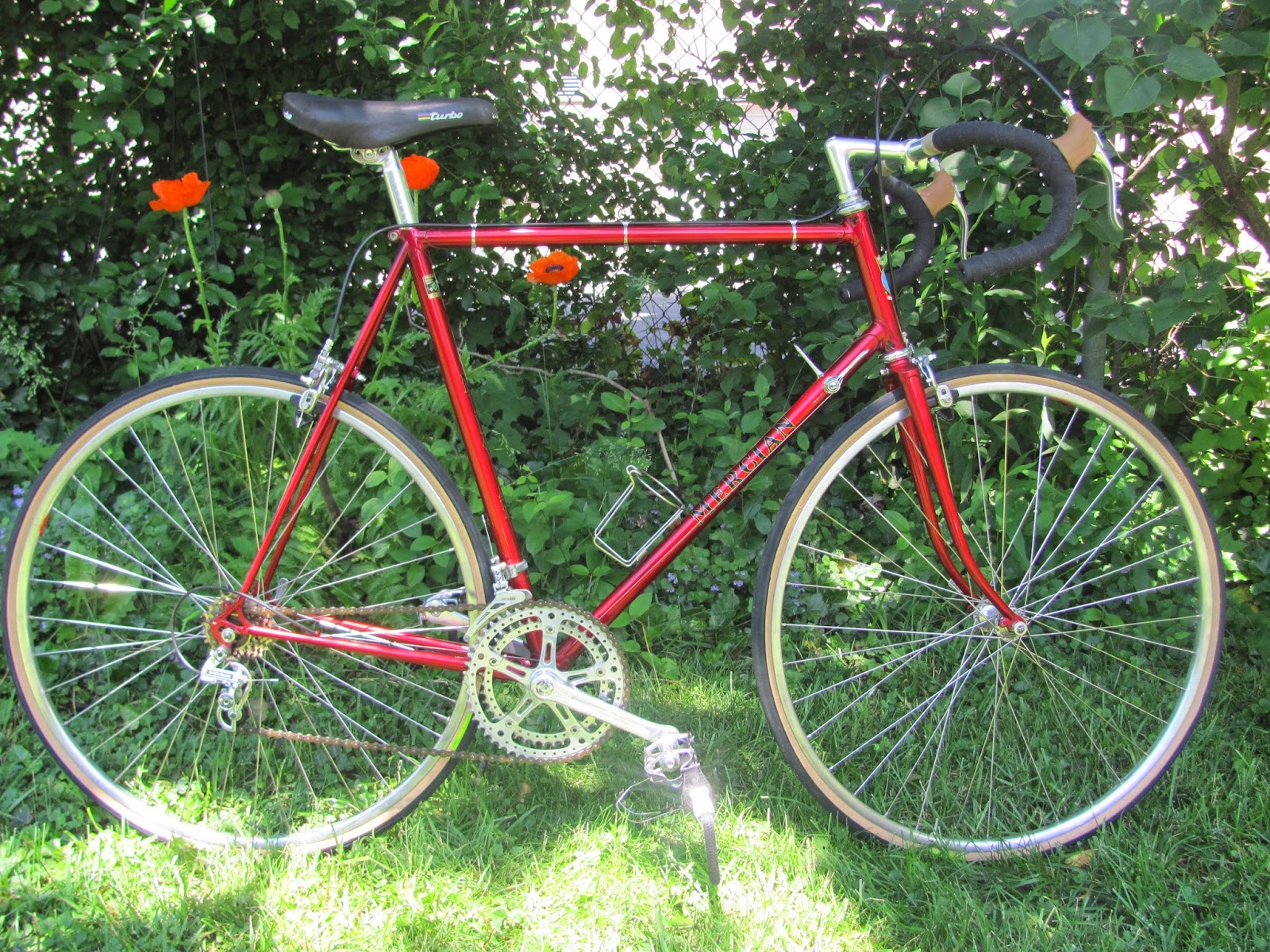 My first thoughts, even before taking off, were that this might be a pretty quick-handling bike. The head and seat-tube angles are 74º, and it has a pretty tight wheelbase of only 39.5 inches or 100 cm (that's with the rear wheel set in the mid-point of the horizontal dropouts). Getting out on the road, I did find that the bike will definitely change direction quickly, and with very little input. Nevertheless, it tracks straight and true, and is a breeze to ride with no hands. One of the first things I noticed, though, was that the vintage handlebars are quite a bit narrower than my present day preferences. Remember the days when bikes typically came with handlebars no more than 38 - 40 cm wide? The vintage Cinelli bars on this bike measure 39 cm (that's center-to-center) at the ends. Most of my bikes today have 44 cm bars. It seems to me that narrower bars make a bike feel a little more "squirrely" than wider ones -- so that could also be affecting my impressions.

The ride of the bike is what makes classic steel so great. With the short chain stays, the rear wheel is pretty tight up underneath the rider's weight, so on seriously broken pavement, it does tend to buck a bit more than a bike with more stretched out stays -- but you can feel that bit of "give" in the frame, and you can see and feel the nicely-raked and tapered fork blades soaking up the patched and broken sections. I'm sure the ride is also helped by the Grand Bois "Cerf" 28 mm tires. Mounted on those vintage narrow Rigida rims, they only measure about 24 - 25 mm wide, so they look narrower than they should -- but they still have sufficient air volume to add a lot to the ride comfort.

I equipped the bike with the wonderful Simplex Retrofriction down tube shift levers and a 1st generation SunTour Cyclone rear derailleur. The front derailleur is a SunTour ARX, which was a step below Cyclone, but still a nice-quality unit, and it shifts just fine (actually, my experience is that with friction levers, most front derailleurs shift fine, as long as they are sufficiently stiff). The freewheel is a 5-sp. SunTour Winner, and the chain is a vintage Regina bushing-type chain. Those old bushing chains tend to be laterally stiffer than the modern bushingless chains -- making them really good for vintage Campagnolo drivetrains. I don't figure it hurts the shifting with the particular setup I have, but what I have found is that each gear change on the back is accompanied by a very distinct "kerchunk" as the chain finds the desired cog. The levers, as expected, work smoothly and have great "feel" for finding the right gear.

The brakes are vintage Dia Compe "G" models which were pretty common on mid-priced bikes in the late 70s, early 80s. I updated them with modern cables and brake pads, because the original pads, even if new-old-stock, can harden with age, reducing their effectiveness. And aftermarket brake pad materials today are an improvement over what was available 30 years ago in OEM pads. My typical riding route down to the Cuyahoga Valley National Park includes a long fast descent with a traffic light at the bottom -- which works out to be a good "proving ground" for any bike's brakes. These stopped me with no worries. Do old single-pivot brakes like these take more lever effort to stop than today's dual-pivot brakes? Or disc brakes? Sure they do. But I don't see that as a detraction. When people talk about "more stopping power" with dual pivots, or with disc brakes, they're blowing smoke. Once a brake has reached the lockup point, it has reached its maximum stopping power -- so any brake you can lock up has the same "stopping power" as any other. What some of the newer brake designs might offer is less lever effort for the same stopping power -- but I see nothing wrong with brakes requiring more effort before reaching the lockup point. Maybe if someone has small hands it could be an issue, but that isn't an issue for me.

One thing I found with the bike is that the gearing is overall a bit higher than I'd prefer today. When I was in my 20s, I probably wouldn't have balked at a crank with 52/44 rings, but nowadays I think of a 39 tooth chainring as more reasonable (or a compact 50/36 crank, even better). Remember that long, fast descent that I mentioned before? Well, most of my rides end by going back up that same hill. Lower gearing would be nice. But if I want to keep that cool old Sugino crank with the drilled rings, then choices are limited.

Something else I should mention about the bike is that it attracted several compliments while I was out. I stopped by at my local bike shop where several people (shop employees and other customers) took a closer look, and then later when I stopped at a rest area to refill my water bottle, I had someone else admiring the bike. "Wow -- a real classic!" he said. But then that last admirer blew it by saying "down tube shift levers -- I don't know how you can use those!" Jeesh. The bike only has 10 speeds (not 10-speed cassette -- just 10 speeds, total) so it's not like there's a lot of shifting to be done anyhow. Jerk.

What else can I say -- the bike did not disappoint. I'm looking forward to more good rides with this beautiful vintage classic.
Posted by Brooks at 5:35 PM