Anybody who reads my blog on a regular basis knows that I try to commute to work by bicycle whenever I can. I'll admit, I do have some limits. Going out to work in the morning, if there's a steady rain falling, I'll drive. And in the winter, my absolute limit is 20º F -- below that, I just can't keep my fingers and toes warm enough over the nearly-hour-long commute. Yes, there are people who gladly ride in downpours, and who put on electric socks and gloves and ride keep riding down to 0º -- but I'm not one of them, and I try not to feel too bad about it. 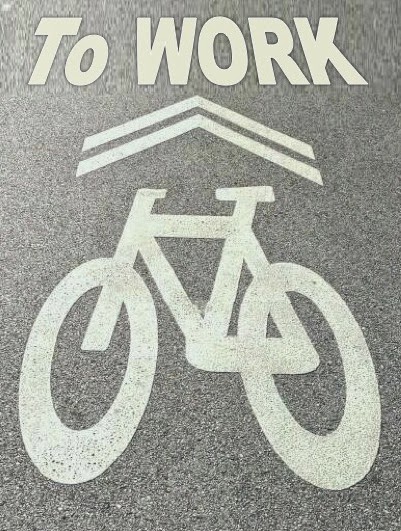 I also keep track of my bike commuting. No, I don't track it on Strava or any other programs or apps. I just mark my calendar any time I ride to work, the Retrogrouch way. Every so often, I'll tally up the marks and do a little calculating to see how I'm doing. Another school year just ended, and I have some numbers to share.

My bike-to-work average this past year was 43% -- down a little from the 50% I managed last year, but the past winter was much worse than we've had in a long, long time. The difference amounted to 15 fewer days riding. My best single month was September, with an 80% average. The worst was February, when I did not bike to work a single day the whole month.

At 28 miles per day, I totaled 2128 miles in bike commuting. My car, a VW Jetta diesel, gets an overall average of about 33 mpg in mixed driving, which means I probably saved an estimated 64 gallons of fuel for the year -- that's more than 4 tanks of fuel. The average price of diesel for the past year was about $3.95 per gallon, so I can estimate a savings of around $255 in fuel costs alone.

Looking at the past two years combined, the bike-to-work average is 46%, and nearly 4650 miles, 140 gallons of fuel, and over $550 in fuel costs. All of that is worth smiling about.

Of course there are some essentials for bike commuting. I like to have fenders on a regular commuting bike -- even though I like to avoid rain if possible, unexpected showers do happen, and fenders do a lot for riding comfort. Not only that, but roads can stay wet for long after showers fall, so even if you miss the actual rainfall, you can still get that big wet stripe up your back, and that's uncomfortable. Still, plenty of people commute without fenders. I also like racks and panniers for carrying work essentials, clothes, lunch, etc. -- though some people are happy to strap on a backpack or messenger bag. Personally, I prefer to carry extra weight on my bike, not my back.

If you have to leave for work before sunrise, or would return home after sunset, then good lights are a must. The nice thing is that lights today are much brighter and better than those available even just a few years ago. Good rechargeable headlights are relatively inexpensive, easily mounted to any bike, and last a long time. Taillights can typically be found in either rechargeable versions, or in versions that take a couple of AA or AAA batteries. With LED light technology, even the disposable batteries last a while. People who become hard-core about commuting, and do a lot of riding in dark conditions, will sometimes opt for some kind of generator light system, doing away with batteries altogether. Those can be great -- but they do require more of an investment up front.

When it comes to cycling-specific clothing, I'd say it really depends on the weather and how far you have to ride. Longer commutes might feel better in bicycle clothing, but a commute of only a few miles can probably be done in "normal" clothes. For my ride, I wear cycle clothing, and change into professional clothes at work -- and I bring fresh clothes to work on the days I drive so I have one less thing to worry about when I'm preparing for my ride.

The distance one needs to commute obviously makes a difference -- not just for the physical act of getting there, but longer commutes need a bit more planning than shorter ones. If you only have a couple of miles to go, as I've said, you can probably get by with whatever clothes you might wear to work, and if you see an opportunity to ride, you can probably just grab your bike and go. Not only that, but a commute of only a few miles won't even add a lot of time as compared to being in a car. A longer commute often means a change of clothes, and also allowing much more time for getting to the destination. For example, my own commute requires that I leave at least a half-hour earlier than I would if I were driving. A longer commute might also require more careful route planning.

Having said all that, though, the biggest requirement in making a bike commute work is simply to have the determination to do it. I've said before that I hesitated a long time before riding to work because I felt that there were lots of obstacles to overcome -- the time, the distance, the route, the weather, the need to shower, the need to dress professionally, etc. In reality, the obstacles were much easier to overcome than I'd imagined.

While I was somewhat disappointed at falling short of my goal (to meet or beat last year's 50% avg.) I figure that it is still a good accomplishment overall. And I can always try again next year.
Posted by Brooks at 4:19 PM