I recently finished reading Charlie Kelly's fantastic, fun, and informative new book Fat Tire Flyer: Repack and the Birth of Mountain Biking (2014, Velo Press). Although I've always been partial to road bikes, Kelly's account of the birth of the mountain bike is well worth reading and a very enjoyable story. 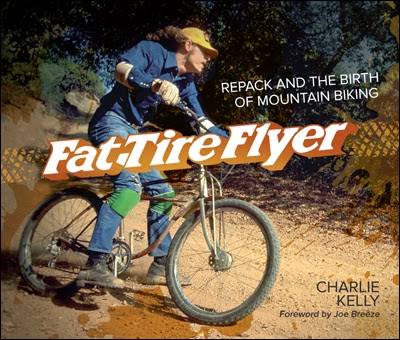 The book takes its title from the magazine founded and published by Kelly in the early 1980s, also called Fat Tire Flyer, which was one of the original publications dedicated to mountain biking in the sport's early days. Charlie Kelly is without a doubt one of the best authorities on the subject, having been involved with the sport since its infancy, and as Joe Breeze refers to him in the book's forward, "one of the main instigators of the sport." Kelly was the organizer of the famous Repack downhill races in Marin County, and the co-founder with Gary Fisher of the MountainBikes company which built and sold some of the first examples of the breed, with frames built by Tom Ritchey. Actually, I'm not even scratching the surface on Kelly's involvement in the beginnings of mountain biking. You'll just have to read the book for that.

Charlie Kelly's book is part informative history and part personal memoir. Kelly is a great chronicler of the people, the places, and the events that combined to turn a band of hippie bicycle enthusiasts in the 70s into the fathers of a whole new bicycling movement. His style is informal and personal, and it isn't difficult to "hear" his voice and imagine him telling the story of the "Klunkerz" and the early Repack races, almost as though you were with him gathered 'round a campfire after a long day of riding the trails around Marin.

Not only is it a captivating "read," but Kelly is also quite an archivist. The book is chock full great photos, many candid snapshots from early rides and races, and numerous "artifacts" and mementos that help document his historical account. There are pages from Kelly's old notebooks, chronicling race results from those famous Repack races, original newspaper clippings, old promotional posters, and much more. It's clear that Kelly must not throw anything away, and it makes me wonder how much more must be tucked away in his collection.

The large format (approx. 9-1/2 x 11" and over 250 pages) would make it easy to call Fat Tire Flyer a "coffee table book" but it is really much more. Yes, one could easily entertain themselves just flipping through the book's many photos, but Charlie Kelly's storytelling style makes it a book that people will want to read from cover to cover.