Well, it happened. My favorite pair of riding shoes, vintage Carnac touring shoes, have given it up.

The old Carnacs had been my go-to shoes for much of my riding, and all my commuting. And even though the uppers still looked great after about 3 years and thousands of miles, it was the plastic sole that gave out -- cracked all the way through, right where the edge of the pedal cage made contact. It happened to both shoes, and it was almost like the pedal cage acted like a little cleaver, splitting the sole in two. Interestingly, I've had other previously loved pairs of plastic-soled touring shoes suffer the same fate. And like most plastic-soled shoes, they aren't really resole-able -- or at least no shoe repairmen that I know will try it.

So it was time to find some replacements - quickly - and as anybody who has looked for classic-styled riding shoes knows, there isn't a lot to choose from. I wrote about some of the options more than a year ago (Classic Cycling Shoes). SPD-type touring shoes are plentiful, but for people like me, who prefer traditional toe-clip and strap pedals, there are fewer choices. There are some models available from Vittoria, Quoc Pham, and Dromarti priced between about $170 - $250. The Vittoria 1976 models are designed for SPD-type pedals, but if one left the cleats off, they might work OK with traditional pedals.

While traditional-looking shoes similar to my old Carnacs are pretty hard to find here in the U.S. (apart from the vintage market), it turns out that our friends in the U.K. still have some nice touring shoe choices.

I recently discovered the Arturo cycling shoes, handmade in England by William Lennon & Co. The Arturos have been made for over 30 years by this 4th generation family business. The shoes are designed for wider feet, which could be very welcome to many of us who find a lot of cycling shoes to be too narrow.

The Arturos are made with leather uppers, and a choice between a thermoplastic rubber sole, or an all-leather sole. All the shoes have a wood shank reinforcement to give some extra pedal support under the sole. They do not seem to have any retailers here in the U.S., but they can be purchased direct from William Lennon. The company's website/webstore only lists the plastic-soled version of the Arturo shoes for £74.95 (about $112 at current exchange rates), but I am assured that if someone wants to order the shoes with leather soles, or any other customization (such as color), they can email the company directly. The all-leather version starts at £84.95 ($127), and one can add other options, such as a rubber no-slip grip on the sole for an extra fee. The shoes can be made to order in 4 to 6 weeks.

I managed to find a U.K.-based retailer who could sell me a pair of the Arturo shoes with leather soles - ready to ship, no waiting. If I weren't feeling pressured because I needed to replace my old shoes right away, I wouldn't have worried much about ordering direct from the company (it might have saved me a few bucks, too). Considering that I was buying new shoes precisely because my old plastic-soled shoes had failed, I felt pretty certain that I wanted an all-leather shoe. My experience is that traditionally made leather-soled shoes tend to be more repairable should something go wrong over time. I get all-leather dress shoes re-soled and re-heeled all the time with no trouble, and not much expense. I don't know for certain if the Arturo shoes could be re-soled someday, but I figure the odds are better. 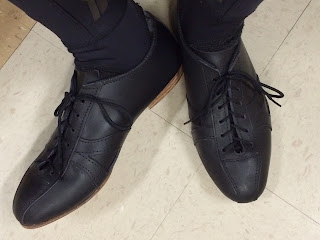 The Arturo shoes are sharp-looking and appear nicely made, with thick full-grain leather. The soles feel adequately stiff on the pedal cages, though my rides in them have not been for much longer than an hour at a time -- I don't know how they'd feel after several hours in the saddle. The best thing, especially for those with wider feet, is that compared to most traditional European cycling shoes, the Arturos feel downright roomy. If you order a pair, do not get to thinking you should go up a size -- in my case, I could probably have even gone about a half-size smaller. If I ordered the shoes again, one thing I would recommend is getting the optional no-slip rubber grip, as the soles feel pretty slippy on smooth floors. For a traditional hand-made, all-leather touring shoe, the price for these is pretty surprising. They are no-frills, but seem like a good pair of shoes.

And Another Option -- Revived:

Right after I purchased the Arturo shoes above, I was made aware of another option - newly revived - from the venerable R.E.W. Reynolds company. I had looked into the Reynolds shoes sometime last year, but got the impression they might have gone out of business. As it turned out, that wasn't quite the case, but it was apparently close. Reynolds had been in the business of making traditional hand-made leather touring shoes since 1921, but was on the verge of shutting down for good. Earlier this year, a new owner, David Smith, stepped in to save the company. Smith has brought a new energy to Reynolds, introducing some new styles and colors to the traditional offerings.

Prior to Smith's purchase of the company, the only shoe was the "Classic Touring" which came only in black leather with leather soles. Recently they have launched what they call the "Classic Road" shoe which is a little sportier, built on a sleeker last, and comes in a couple of choices of colored leathers and stitching combinations.
The new Reynolds has also just created a leather SPD-compatible shoe which they plan to release in early 2016. According to Smith, the company would like to release a cleated road shoe sometime next year.

Here in the U.S., Reynolds shoes can be hard to find as they don't seem to have any U.S. distributors at this time. However, their shoes can be purchased directly from the company through their website (reynolds-england.com), and they will ship worldwide. One can email the company to see if the style and size are in stock, but the website says shoes can be made to order in as little as 3 weeks.

The price puts them in the same league as the very nice Dromarti shoes that I've drooled over but can't afford. With prices ranging from £149 - £195 ($225 - $295 at current exchange rates) depending on styles, the Reynolds shoes do cost quite a bit more than the Arturo shoes shown above, but the shoes do appear to have some extra features and details in the construction that may justify the higher price. I can't get a pair of the Reynolds shoes at this time, so I can't speak from personal experience, but I think one might find these to be a more deluxe option if they have the budget for them.
Posted by Brooks at 7:53 AM