It's always nice to have choices. And if you like traditional leather saddles, as I do, then you may be glad to know there are some new choices available. Italian saddle maker Selle Italia (whose name literally means "Italian Saddle") has just re-introduced a line of traditional leather saddles to help mark their 120th anniversary. Although I haven't seen any mention of "Eroica" in the news and press releases, the growing popularity of those vintage-bike events make this introduction seem totally natural. 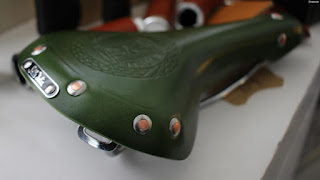 The company's new Heritage leather saddle line also bears a slightly different name - Sella Italia (notice that it's "Sella" with an "a" not "e" at the end). There are three models available in this new line: the Storica racing saddle, which is long and narrow -- something akin to a Brooks Swift; the Epoca, which is a little wider and shorter for all-day comfort with a more upright position; and the Mitica, which is somewhere in-between for long rides at a more aggressive pace. All three saddles feature bag loops at the back, which is a nice practical touch. 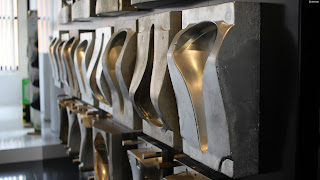 One thing I found interesting in this bit of news is that the saddle maker still had many of the old leather presses from the days before the company shifted its attention to molded plastic saddles (like that '80s-defining classic, the Selle Italia Turbo), and those tools have been "pressed" back into service for this new throwback line.

However these new models are not just a simple reproduction of the company's old leather saddles from the '50s. The construction of these incorporates some new technology as well, which could improve the durability. Instead of a single layer of leather, Sella Italia is using a 3-layer sandwich construction: a two layers of leather with a mesh fabric bonded in-between. The leather is fixed to the frame using special bi-metal compression rivets that don't require hammering. The company says this construction will prevent sagging or damage from over-tensioning, increasing the life of the saddle.

In addition to the new saddles, there are also leather grips and small leather saddlebags. The bags look nice, but the small size of the ones I've seen mean they are probably not suitable for carrying much more than a spare tube and some compact tools.

The price of the saddles hasn't yet been released, but expect them to be a premium - probably $150 or more.

On a somewhat different but related note, I just saw a press release that Selle Italia has also taken over another major Italian saddle maker, Selle San Marco (their Concor model was another one that was very popular on racing bikes in the '80s). And to clear up some possible (likely) confusion, let me point out that neither of these is the same Italian saddle maker that currently owns Brooks saddles. That one is Selle Royal. In case there are still some lingering questions, there is yet another Selle out there -- Selle Anatomica - which despite the Italian-sounding name, is an American company making leather saddles that are known for their slotted-top design. Got it?
Posted by Brooks at 10:55 AM