Nothing Sounds Like "Heat" More Than the Drone of Cicadas 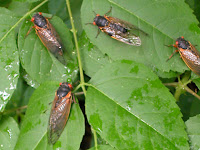 A few weeks ago, the 17-year cicadas emerged and the sound of their rattling filled the air, but nowhere was their sound more overwhelming than in our local bicycling mecca, the Cuyahoga Valley. The cicadas are still going, but now their drone is more of a death rattle. Out for a ride through the valley today, one could see them lethargically flitting from one tree to another, and often literally dropping dead to the ground. In some places, there were so many dead ones on the road that the unavoidable sound of their little bodies crunching under the tires was competition for the sound of the live ones still in the trees.

Having spent two recent weeks in London and Paris, where the temperature never rose above 65 degrees (American) the whole time we were there, it was a bit of a shock to the system to come home and find the temperatures up around 90. Somehow, the rattle of the cicadas makes it seem even hotter.

Feeling in kind of a vintage mood, I took my old 1980 Mercian Strada Speciale for the ride. 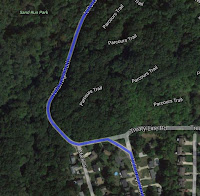 There's a nice long and twisty descent into the valley from Akron. I live in a part of the city known as Highland Square, which gets its name for a reason. It isn't the highest elevation in the city, but it's probably in the top three. Most of my rides start with a nice descent, and end with a breath-stealing climb. The hill on Portage Path has a pretty challenging S-curve in it, and combined with the grade, a skilled cyclist can get some serious speed going down. In fact, it's one of those rare hills where a cyclist can actually get down the hill faster than a car. 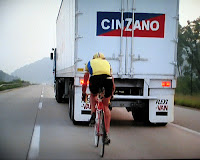 Today, going through the S-curve, I caught up with a car ahead of me -- a guy in a 7-series BMW. I had to grab some brake to stay off his bumper, and a touch of brake squeal alerted him to my presence. As the road straightened, he picked up the pace, and I just tucked into his draft. I'm guessing this guy must have seen Breaking Away a couple of times, because the next thing I see, he puts his hand out the window and extends all five fingers as if to signal "50 mph" like the driver in the Cinzano truck. At the bottom of the hill, he confirmed the speed, and sounded pretty impressed. I didn't tell him that if not for the fact that there were cars in the oncoming lane, I probably would have just passed him.

Once in the valley, I sought the shadier routes, and took a little trip around historic Hale Farm and Village and paused for a bit at the old covered bridge on Ira Road. I stopped to snap a picture, then found that the wild raspberries are ripening. 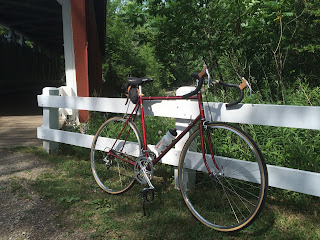 After looping around the Village of Peninsula, in the heart of the national park, I headed back toward home, but made sure to stop at Szlay's produce market for nice snack. (The raspberries were good, but not very filling). With a nice selection of fruit, I picked a big fat plumb. I can't eat plumbs without thinking of poet William Carlos Williams:


I have eaten
the plumbs
that were in
the icebox

and which
you were probably
saving
for breakfast

Forgive me
they were delicious
so sweet
and so cold

Don't ask me to explain it. I'm an English teacher, but I'm off duty. But it seems a good contrast with the heat.

While I was stopped for my snack, another rider noticed the vintage Mercian and came over to get a closer look. He was well able to appreciate the bike's 531 frame and original paint. I told him about my recent visit to the company's workshop and how I got to see some of the bikes being built and painted. That was a fine diversion.

After continuing through the valley, where the road skirts alongside the Cuyahoga River, I got back to the climb back up to the city. I love the look of the Mercian's old drilled-out Sugino crank, but times like this I wish I could put something smaller than a 42-tooth chainring on it. But you know what they say: Tough climbs keep you young. Okay, nobody actually says that, but they should.

Wherever you are, I hope you're enjoying the weather.