I know that all the other bike blogs today will likely be full of news about the Big French Bicycle Race in France. Let me dispense with that right away - defending champion Chris Froome won, despite his momentary loss of higher brain function on Mt. Ventoux where, after apparently hitting his head in a rear-end collision with a stopped motorcycle, Froome got to his feet and somehow thought he was competing in the NYC Marathon. It coulda happened to anyone. That makes three wins for the likable but physically awkward Brit.

But no, instead I'd like to talk about that other circus that just came to an end - the Republican National Circus (sorry) Convention - which was held last week in Cleveland. I'd have liked to have ignored that one too, but it was practically in my backyard. You see, Cleveland is kind of like Akron's bigger brother to the north - and the brotherly comparison is an apt one. To Akronites, Cleveland is kind of like that jerk of a big brother who held your head in the toilet when you were kids, and tells embarrassing stories about you to your girlfriend.

Yes, they can be jerks sometimes, but they're still family.

On the whole, the RNC defied most people's expectations. Oh sure, there were some memorable moments: Melania Trump's cribbing from Michelle Obama's term paper (or Twilight Sparkle Pony, depending on whom you believe).

And of course there were apocalyptic visions of an America on the brink of annihilation.

Perhaps the biggest surprise of the week, at least to most of America apparently, was that Cleveland turned out NOT to be the horrific third-world cesspool they all assumed it was.

Nor do the residents look like the banjo boy from Deliverance:

In further defiance of expectations, there were not massive, violent clashes between opposing protesters. And apart from some dimwit who tried to burn an American flag and instead managed to light himself on fire, things in Cleveland outside of the Quicken Loans Arena were relatively calm. Major credit goes to Cleveland Police for that.

And this is where bicycles come back into the story.

Cleveland Police relied quite a bit on bicycle patrols to help keep things under control. The advantages of the bicycle unit, which was only recently formed specifically for the convention, are said to be that the officers have better mobility and maneuverability through crowds while being "friendlier" and "less-intimidating."

The CPD purchased 300 bikes with a federal grant they got for hosting the convention. The bikes themselves are Safariland Patrol Bikes, made by Kona. According to Outside Online, Safariland is a supplier of police equipment, including things like shields and body armor.

The Cleveland bike patrols received training from Seattle police, which have used bike patrols for some time now. Seattle police trained the new Cleveland patrols in tactical uses and crowd control formations. In some cases the bikes can be used to move quickly around the city, and in other cases, police used the bikes as moveable barricades to separate opposing protestors, or to help move and direct crowds. 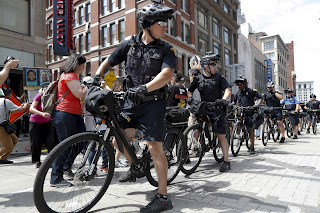 Though the new bicycle unit was formed specifically for the RNC, the unit got to make their debut at last month's massive celebration parade for the NBA Champion Cleveland Cavaliers. That parade drew approximately 1 million people (!) easily making it the largest gathering in the city's history, and one of the largest sports parades in American history. It was especially noteworthy for being incredibly peaceful and non-destructive.
Overall, reactions to the bike patrol were generally positive. Though I did see a quote from one protestor who called the bikes a "cold weapon of steel" and complained that police rolled over someone's foot. Can't keep everyone happy, I guess. The bike patrol is set to become a permanent part of the city's police force.

Lastly, my favorite bike related thing to come out of the convention was this guy:

That's Jon Harris, a Cleveland-area librarian, who loaded his bike up with books and rode to the convention to distribute them to delegates and protestors alike. Declaring himself a "book propagator" and wearing a "Make America Read Again" hat from the famous Strand Bookstore, Harris said, "I've tried to make my pitch for what we do and how vital public funding for libraries is. The Tea Party crowd can say they love libraries, but they need to put their tax dollars where their mouths are."

Here's the best part. Harris was one of my former high school students. I gotta say, I'm proud of the guy. Last note to fellow bike retrogrouches -- if you look closely at the photo, you'll see Harris' bike is a vintage Austro-Daimler. I actually remember that bike because he brought it to school once (it's got to be 12 or more years ago now) so I could help him fix the brakes. I notice he's added a Brooks leather saddle since then. Nice to see he still has it.
Posted by Brooks at 10:23 AM