What Keeps A Bike Upright?

I've been seeing and hearing a lot lately about a recent article from Nature: The Bicycle Problem That Nearly Broke Mathematics. 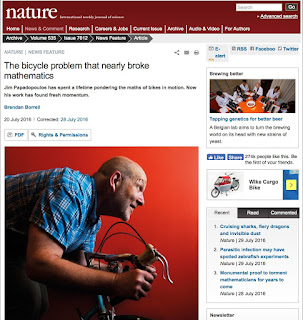 The article mainly focuses on Jim Papadopoulos, an engineer who has spent much of his life studying the dynamics of bicycles in motion. I think the title might be overstating things a little when it suggests that the questions "nearly broke mathematics," though it is something interesting to read.

"Papadopoulos, who is 62, has spent much of his life fascinated by bikes, often to the exclusion of everything else. . . He could never ride a bike without pondering the mathematical mysteries that it contained. Chief among them: What unseen forces allow a rider to balance while pedaling? Why must one initially steer right in order to lean and turn left? And how does a bike stabilize itself when propelled without a rider?"

Papadopoulos, with friend and colleague Andy Ruina, studied these questions of bike balance and stability as part of the Cornell Bicycle Research Project -- an endeavor they hoped would attract research interest (and funding) from the bicycle industry, though according to the Nature article, didn't really pan out. The main interest came from makers like (Alex) Moulton and Dahon -- whose small-wheeled bicycles presented different handling issues than most regular bikes. With the apparent lack of interest from the industry, the Cornell Bicycle Research Project ended at the end of the 1980s. After the project ended, Papadopoulos wrote some contributions to the 3rd Edition of D.G. Wilson's Bicycling Science.

In 2002, Ruina teamed up with a scientist from the Netherlands, Arend Schwab, to set up a new state-of-the-art laboratory to pick up where the Cornell Bicycle Research Project left off. Papadopoulos joined the project the following year. The team worked out a full set of mathematical equations to take into account all kinds of bicycle design variables for stability. Gyroscopic effect, fork rake and trail, the caster effect, and weight distribution -- all are part of the picture. With the equations worked out, the team created models to put them to the test. One of these test models was a "riderless bicycle," built with small wheels, and counter-rotating wheels to cancel out the gyroscopic effect, a negative trail figure, and weighs that could be re-distributed in different configurations. Once set in motion, the bike would self-correct its balance and stay upright until it came to a virtual standstill. Understand that, at least according to some earlier theories on bicycle movement, the negative trail and lack of gyroscopic effect should have caused the bike to topple over almost immediately. The riderless bike essentially proves that weight distribution plays a role as well.

The research this team is doing builds on research that's been done for decades, but is apparently more maths-based than trial-and-error as a lot of earlier research had been. As the article points out, for much of the bicycle's history, gyroscopic effect was believed to be the main factor in keeping a bicycle balanced. Then in 1970, David Jones put that to the test with a series of "unrideable bicycles" -- one of which had counter-rotating wheels that should have cancelled out the gyroscopic effect. What he found was that the bike could still be ridden without much difficulty. By the way, there seems to be a discrepancy between the Nature article, and the account of Jones's work as it is described in the book Bicycling Science (2nd edition -- I don't have a copy of the 3rd). The Nature article says Jones had little difficulty riding the bike hands-free. Bicycling Science says it was very difficult to ride hands-free without the gyroscopic effect. In any case, Jones built more "unrideable bicycles" to test what we know about rake and trail -- which contributes to the "caster effect" where wheels turn in the direction of movement. Jones found that a bike with an extremely large trail figure was so stable that it was awkward to ride, and the bike he built with an extremely negative trail figure was impossible to ride no-hands. The "unrideable bikes" were all, however, rideable.

The work done by Papadopoulos and Ruina today seems to indicate that keeping a bicycle upright is a combination of many factors. Gyroscopic effect, caster effect, and weight distribution are all important. However, as the article seems to indicate, the hope was again that the industry would take notice and that their research might lead to new bicycle designs, and there may be some disappointment owing to the fact that it isn't happening.

"Papadopoulos can't help but feel deflated. 'It did not change everything in the way that we imagined,' he says. This year's bike frames look much like last year's. 'Everyone is still in the box,' he says."

One question many might be asking is what is the practical use here? Bicycles work quite well as they are. There is no need for a riderless bike. Understanding the mathematical equations on bike balance doesn't change the fact that riding a bike is a "second-nature" skill that we all learn and never forget. And maybe that's why basic bike designs are unlikely to change much regardless of what the research finds.

However, there may be some practical applications of the research, albeit with a fairly limited appeal, and therefore only a small marketing potential. Some of the projects "include a 'steer by wire' bike which separates steering movements from balancing ones, and a 'steer assist' bicycle which stabilizes itself at slow speeds." The article also mentions a "rear-steered recumbent that shows self-stability," the chief advantage of which is that it could have a shorter chain and better energy transfer." Other attempts at rear-steering proved truly unrideable. I can imagine that further research into such things could potentially lead to bikes that could be ridden by people with physical disabilities. But those kinds of applications probably aren't going to attract the main bicycle manufacturers. In the article Papadopoulos also mentioned working on the problem of speed shimmy, which has long been a bit of a mystery to bike designers and builders.

I did read a pretty sharp criticism of the studies and the Nature article by retired framebuilder Dave Moulton: When Science Finds Problems That Don't Exist. As Dave points out, in his no-nonsense way, "Bull$h!t baffles brains. And clever sounding waffle can impress. . . but analyze the piece and it says nothing of value."

Dave points out, and I would have to agree, that understanding how a bicycle works isn't that much of a mystery, and people have understood a lot of the principals for long time without feeling compelled to work out the math. Consider that anyone who has tried to ride extremely slowly (or even track stand) has been able to recognize that gyroscopic effect is part of balance, but clearly not the only part. And that trail, or the caster effect, is again part of the picture - but not the only part - because again, one can balance at a standstill simply by shifting their weight appropriately - making constant small "corrections" - just as we can balance the end of a broom on the palm of our hand. So it would seem that a lot of the research into a self-balancing riderless bike just confirms what a lot of us may have already known intuitively.

I suppose if there is one fascinating takeaway from the article and the research, it's that the people who built the first bicycles really stumbled upon something pretty incredible, because the bicycle's basic design and layout hasn't really changed much in well over a century. The design, within a fairly narrow range of frame angles, fork rakes, and trail figures has remained pretty consistent. Angles have steepened somewhat (from the high-60s to the low-70s), but they've always been within a narrow range that works, and has worked from the beginning. Think about that when you're out for a ride.
Posted by Brooks at 10:40 AM