I was with my kids last week in a popular local park. We had gotten some ice cream and walked to the park to enjoy it. It was a gorgeous day and there were lots of other people in the park. We sat in the shade and ate our ice cream, and afterwards my girls chased each other around, and tried to do handstands and cartwheels. While I watched them playing, I noticed that, apart from two boys kicking a soccer ball back and forth, every other person in the park was walking around with their eyes locked on their phones. Kids, teens, and even adults. The majority of them were playing Pokémon GO.

Just in case there's anyone reading who doesn't know about it, let me briefly explain that Pokémon GO is a smart-phone based game that leads people through real-world surroundings in search of animated creatures that they can "catch." People will walk around following the trail on their phones trying to find the creatures -- wherever the trail might happen to lead. And of course, because their eyes are glued to their phones, they aren't typically looking where they're actually going. This kind of carelessness can be obviously hazardous to the person playing the game on foot (reportedly, a number of game-playing idiots have walked into traffic). When people try to play the game while driving, the result can be deadly, and not just for the player. The game's creators recommend that people use common sense when playing the game - but if there's any indisputable truth that I've learned over the years, it's that "common sense" is actually very uncommon. And it seems to me that the "smarter" phones get, the dumber people get. 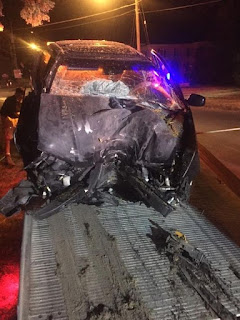 Within a week after the game's release last month, the inevitable happened. In Auburn New York, some idiot, trying to track down Pokémon critters while driving, slammed his car into a tree. Judging from the damage to the car, I'd say he was fortunate to escape with only minor injuries. A couple of days later in Baltimore, another Pokémon-hunting driver crashed into a stopped police car. Emerging from his car, still holding his cell phone, the driver said, "That's what I get for playing this dumb game." Again, luckily, nobody was hurt, but the police officer, who was standing outside his patrol car at the moment of impact, could easily have been killed. It was just pure luck the phone-addled driver missed him.

A couple of days later in Melbourne, Australia, a teenager drove through a schoolyard and crashed into a school building while playing the game. That same week, a teen in Napa, CA drove into a power pole. Miraculously, none of these incidents has resulted in anything more than property damage and some minor injuries. But the very first thing I think of with these incidents, along with all the texting and other phone use while driving, is what about cyclists and pedestrians? People are already being killed by drivers texting or talking on the phone. It's only a matter of time before one of these jackasses kills one of us while hunting animated creatures. And will the stories about it still be as glib as they are now?

After the first crash involving a Pokémon-chasing driver happened, Auburn Police Chief Shawn Butler advised people to use common sense (there it is again) when playing the game, and said "personal safety should be paramount above everything else." I say screw that. It's bad enough these fools put themselves at risk playing a ridiculous phone game while driving -- maybe the risk they pose to the rest of us should be "paramount above everything else."

I know there are always concerns about the "nanny state" and reactions against regulating "personal behavior," but the problem of distracted driving just keeps getting worse, as the distractions get more tempting, and people keep demonstrating that they are unable or unwilling to think about anyone but themselves, it's pretty obvious that some kinds of "personal behavior" have consequences for the rest of us. And yet, many states still have no distracted driving laws, and for many of those that do, the laws are basically unenforceable. In my state of Ohio, for example, an adult can drive past a police officer with a cell phone right in front of their face, and cannot be pulled over. Only if they can be observed breaking some other law can anything be done, and all that means is that they get an extra fine added to their bill.

On a bike, I have a pretty clear view into the cars that I encounter, and I'd estimate that probably ⅓ of the drivers I see at any given time have a phone in their hand. They clearly aren't too worried about the no-texting law. It should be obvious to people that they are putting others at risk - but they apparently don't care. Maybe its time that something finally gets done.
Posted by Brooks at 1:12 PM