I just replaced the Brooks saddle on my Rivendell. It had 17 years of use on it and was getting almost a little too soft and saggy for my taste. Now, I've seen people ride them until they looked like swaybacked nags - mine wasn't at that point yet and with proper care it could probably last a good bit longer, but it seemed to me that 17 years is a pretty good run for any saddle.

You know, eBay is a really wonderful thing sometimes. Rather than buy a brand-new Brooks B17, I decided to search the 'bay for one that was barely used so I could save a few bucks. That's the thing about Brooks saddles: lots of people buy them, use them one time, and decide they're never going to get comfortable on it (shocking to me, since I find them comfortable right out of the box), so they sell the Brooks and buy some thick, massive, gel-padded monstrosity. It didn't take long to find exactly what I was looking for - a "barely used" B17 with a "buy-it-now" price of $72. I snapped it up. 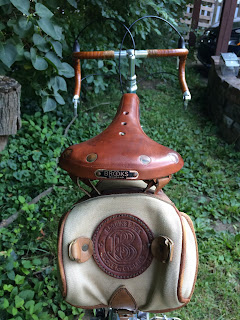 When the saddle arrived, it was hard to tell it wasn't brand new. But the funny thing was when I flipped it over to look at the underside. Brooks saddles have a date code stamped into them, and as it turns out, this "new" old saddle had the same date code as my old one - both were made in 2001, also the same year my Rivendell was built. That's right - they were, in a sense, "brothers." In fact, the "new" old Brooks is actually a little nicer than the old one. The old one was a B17 "Standard" while the replacement one is a "Champion Special" - which has the larger hand-hammered rivets, a skivved lower skirt edge, and copper-plated rails. Some say the leather is a little thicker, too. It's hard to imagine finding a more perfect replacement.

Oh - so what did I do with the old one? I put it on eBay where it (shockingly) sold for nearly what I'd paid for the replacement - making the replacement practically free. Better and better.

I have a lot of bikes. I lose count (yes - I really do), but I'm sure it's more than a dozen, and they're all really nice bikes. But if through some strange set of tragic circumstances I had to get rid of all of them but one -- to somehow make do with just one bike for the rest of my life -- I think the one I would have to keep would be my Rivendell. The bike is comfortable and handles well. It's no racer, but I'm fast enough on it to keep up with anyone I care to. It can take racks and some bags for a light tour. It accommodates tires at least up to 35mm with fenders. Overall, it's just a really versatile bike. 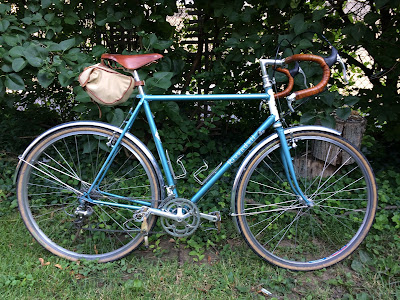 Built by Curt Goodrich back in 2001, it's the bike I've probably owned the longest. Back when I got it, I built it up with a great mix of parts that I'd selected for reliability, durability, and service-ability. Shimano Ultegra derailleurs and hubs. TA crank and pedals. Phil Wood bottom bracket. Stronglight needle-bearing headset. Nitto bars, stem, and seat post. Over the years, I've put a lot of trouble-free miles on it.

Recently I've been doing some cleaning and maintenance on the Riv to get it ready for a vacation I'll be taking with it, and I've made a few small changes - replacing parts on it for the first time since I first built it up (apart from things like tires and brake pads, that is).

First thing was the saddle, as already described. The next thing cropped up as I was taking parts off to give everything a good cleaning and lube. I went to remove the front derailleur (Shimano Ultegra 6500) and couldn't get it off. After 17 years, there was some noticeable oxidation on it - but apparently there was some corrosion hidden inside the hinge on the clamp, so the clamp was frozen and wouldn't budge. I shot a bunch of penetrating oil into it and let it soak for a while. Tried that again. Eventually in trying to pry it open, I got the thing off, but found I'd gotten it open only because the clamp bent - the hinge remained frozen. Oh, crap. Back to eBay. Whod'a thought you could find a NOS 17-year-old Ultegra front derailleur? A brand-new (old) component, exactly like the one being replaced - for less $$ than the current edition, too. Perfect. I replaced derailleur cables while I was at it. 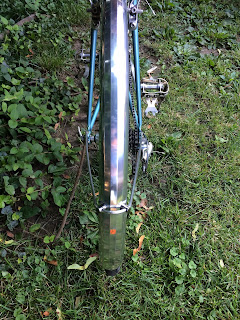 After a good cleaning, degreasing, inspecting, and tuning, the last change was fenders. I had ridden this bike for the first few years I had it without any fenders at all, but for the past nine years or so, I've had it equipped with Velo Orange hammered-look fenders. Other than the fact that they were starting to rattle quite a bit (which I'm sure I could have solved) there was nothing wrong with them. But recently I was reading Jan Heine's book on René Herse's bicycles, and in those pages, bike after beautiful bike was equipped with fenders bearing a ridged or "faceted" finish - looking almost like the surface of a zeppelin. It was a great look and I took a bit of inspiration from it. Velo Orange sells fenders with that pattern on them, so I picked up a set and installed them. I'll set the hammered ones aside and re-use them when I build up a new bike for one of my daughters.

OK, maybe "makeover" isn't the right word here since the bike's barely changed. It's kind of funny to think that on a 17-year-old bike, even the new replacement parts are as old as the rest of the bike.

Incidentally, on my Sunday morning ride with the newly-freshened Riv, I stopped off at the little produce market in the valley - it's a popular stop for all the cyclists riding through the national park. When I came back to the Rivendell after buying some sweet corn and other fresh treats, I found a small crowd standing around admiring my bike. Many weren't even familiar with the name or brand, or even classic steel-framed bikes. They just knew they liked it. "Wow - that is a beautiful bike," I heard several people say.

Got to say, I was feeling a little lighter on the ride home.
Posted by Brooks at 3:26 PM