With our school year drastically "truncated" due to COVID19, and with the announcement that we are definitely not going back before Fall, I suppose it's time for a look back at my bike commuting numbers for the year.

Up until the shutdown, I was actually having a pretty good year, commuting-wise. One of my best, in fact. I was well on track to be able to ride over 100 days, and I am fairly certain 110 might have been within reach. Well, we all know what happened next. Schools and many businesses in Ohio (and across the country) were closed in mid-March, and that put a cap on my commuting numbers until next year.

At the time the shutdown happened, I had ridden 82 days -- not too far off the 90 days I had set as my "minimum" goal for the whole year back in August. But given the truncated schedule, that still gave me a bike-to-work average of 61%. Considering that April and May are usually pretty good riding months for me, I'm sure that had we not closed early I could have improved that average, and nothing that I've seen of the weather we've had since March tells me otherwise. But 61% is still one of the better years I've had. In fact, last year I had only reached 80 days overall in a normal full-length school schedule. I beat that with 2½ fewer months of work!

So, here are some numbers. As already mentioned, 82 days gave me an average of 61%. At 28.5 miles each day, that works out to 2337 miles, and a savings of somewhere around 82 gallons of gas. At current gas prices, that's a savings of around $150, or somewhere in that neighborhood (gas prices have been pretty cheap the past year, haven't they?).

This also helped my long-term average slightly. I've been commuting by bike regularly for about 8 years now, and with this year factored in, my overall average ticked up slightly to 54%. In 8 years time, I calculate that I've ridden more than 21,000 miles just going to and from work.

I wish I could have gotten some more pictures from my commuting rides - but I was still riding in complete darkness through my entire morning commute when things shut down in March. So I'm going to have to post a re-cycled photo from the ride to work. Sorry about that. Here's a good one from last year - maybe I'll end with this: 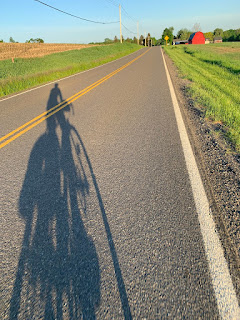