Regular Retrogrouch readers know that I'm kind of a nut over Mercian bicycles. I have a pretty sizable collection of them myself - some older, some not so old. But whenever I see one, I have to take time to look it over. If it's my size and it's for sale, I can't help but contemplate whether or not I can add it to the collection.

I just recently saw a very special example that I really want to share here. It's not mine - and I don't think it's ever going to be - but it comes from Ken Wallace at the Bisbee Bicycle Brothel in Bisbee, Arizona. This is a very special bike for a number of reasons.

One, it's one of the earliest examples I've ever seen from the brand. It dates to 1950, and the Mercian shop had only opened for business in 1946. According to Ken, it was likely built by Tommy Crowther, who was one of Mercian's founders, along with Lou Barker.

Two, it's absolutely gorgeous and unique. It has beautiful hand-cut lugs in a shape that I've never seen before - not on a Mercian, and not quite like the ornate lugs even on other bikes known for such things. It also has a very rare head badge - the likes of which I've only seen on one other bike in all the years I've been following them.
The color combination is pretty spectacular, too. Sort of a flamboyant fuchsia with white contrasts and gold lining. 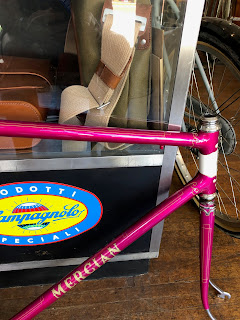 The paint condition is spectacular -- I thought perhaps too nice to be original. Ken confirmed that it was repainted at some point. Another clue pointing to a repaint was the downtube decal lettering which is of the current style, which I believe was introduced in the early '60s. Mercian bikes I've seen from the 1950s usually have a "script" lettering style like this:

It's clearly a really special bike. And it's just one of many special bikes at Ken's shop - which is as much a bike museum as it is a bike shop. I've never been there (never been to Arizona, for that matter) but I'd love to visit the place in person. 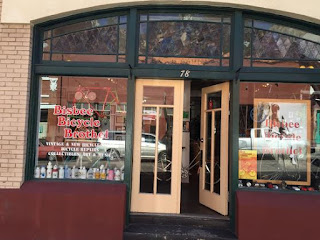 A couple pictures of the shop - all from their website.


About ten years ago, Ken's shop was featured on a TV show called Arizona Highways. Here's a link to the video on YouTube. Enjoy!


Thanks, Ken, for sharing your Mercian with the Retrogrouch Blog.
Posted by Brooks at 1:27 PM