I haven't had a lot to post about lately - this summer has had me off the bike quite a bit for various medical things, minor surgeries, and other procedures - Nothing too serious or alarming - but it has meant that I haven't been able to ride as much as I might otherwise. For a guy who rarely gets sick, and almost never goes to the doctor, it seems like I had to have a lot done all in one summer.

Anyhow - I'm doing better - and I did finally manage to get out for a nice ride, early in the morning, just a bit after sunrise. We had some mist in the lower lying areas, especially down in the valley - and I needed to stop a few times for some pictures. 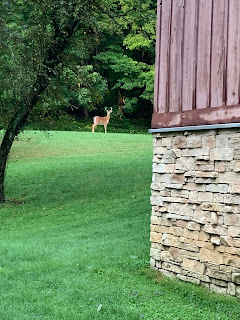 At one point, on a narrow and twisty stretch of road that is mostly closed to traffic (or at least, car traffic) I came down a short hill, around a bend - and damn near ran head-on into this buck standing in the road. I swerved, and he bolted - but he didn't go far before stopping to look back. That was a bit of a scare - but a good one. 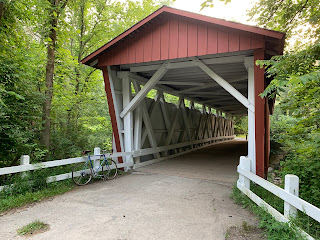 Had to get at least one bike picture in here - it is a bike blog after all. 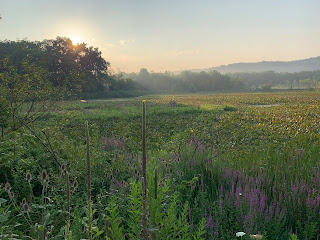 Passing by a marsh - known as "the beaver marsh" - though truthfully speaking, I've never actually seen a beaver there. I know they do live in the marsh, as one can see where they've chewed some of the trees, and there is definitely a beaver hutch out there in the marsh if you know where to look. But an actual living beaver? Strangely, I've yet to see one. But the sun coming up, just behind the trees, cast an awfully pretty glow over the scene. Those flashes of purple you can see out there - that almost look like purple flames rising out of the water - are actually a non-native, invasive species known as "purple loosestrife" that the national park service would like to be able to control. It's apparently harmful to the native species - but it does look pretty. 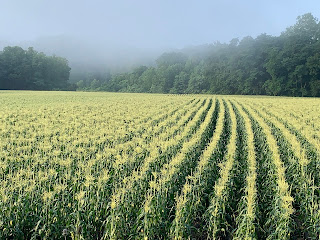 There are cornfields like this scattered all over the valley, along both banks of the Cuyahoga River. Here you can see some fog just starting to burn off as the sun is coming up. Passing by the fields at this hour, you can really smell the corn. It smells sweet, which shouldn't be a surprise. They've been harvesting and selling the corn at the little farm market for the last couple of weeks, and I think the corn so far this season has been the sweetest I can remember. We've had a lot of rain this summer - especially earlier on - but more recently, we've been getting a lot more sun. Evenings have been cool, and the days have been warm and sunny - and something tells me that those are probably the perfect conditions for the best sweet corn.

Well - that's all I've got for now. We'll be heading out for a family vacation very soon - and I'm taking a bike, so there will be a report coming up.

Until then - happy riding.