I had mentioned in my last post that the family and I would soon be taking a vacation trip - and that's exactly what we did. We made a drive from Ohio south to Virginia, where we would be spending about a week in the Williamsburg area - in the eastern part of VA, near the Chesapeake Bay. Well, by the time this gets posted, we'll actually be wrapping it up and on the way back home. But since we were driving, it was a simple matter to bring a bike - which as far as I'm concerned, is the best way to explore someplace new (or in this case, someplace very old).

There is a lot of history in this part of the country - which has always been a point of interest for me. I mean - I'm an English teacher, but for me, History was also a possible path. Seriously - how many people do you know who read Alexis de Tocqueville's Democracy in America at 17 - and not as a required reading assignment? I'd seen enough references to it in other books that I figured I should check it out. You know - for a little "light reading."

Anyhow . . . this part of Virginia is full of destinations for anyone interested in history. Colonial period, and Revolutionary War history and lots of Civil War history too. Everywhere you go, there are old battlefields, historic homes, monuments, gravesites, museums, and more. We had plenty of activities planned out as a family, but I also made sure to leave some time for riding during our stay.

On my first day out on my bike, I got out early while everyone else was still asleep to do some exploring without wandering too far from our home base. I planned out a ride to Colonial Williamsburg, which was about a 20 - 25 minute ride away from "home." Most readers are probably at least somewhat familiar with Colonial Williamsburg, but in case anyone needs the info - it's a fully restored "living history" village, where people dress in 18th century clothes, and give demonstrations on all aspects of colonial life. Williamsburg had been the capitol of the Virginia colony until 1780, when the capitol moved to Richmond. After the move, Williamsburg basically became just a sleepy little southern town until the 1930s, when a foundation was created to restore it to its 18th century appearance.

Getting to the restored village at 7:30 am on a Sunday morning meant that I was seeing it before the other tourists started arriving, and before anything was open. There were lots of workmen and maintenance people all over the village - cutting grass, trimming shrubs, making repairs - and then by 9:00 am, they all clear out, and the folks in period costumes take over the scene. 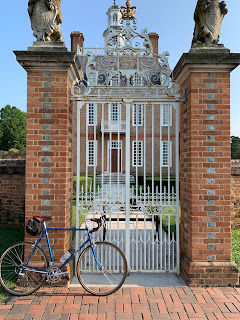 One of the major parts of the restoration of Williamsburg was to completely rebuild the Governor's mansion, restoring it to its former glory. Again - I was there before opening - so the gates made a decent backdrop for a bike shot. And yes, I did also get to see the place during normal hours with the family, tour the inside, and explore the gardens and grounds. It's impressive. 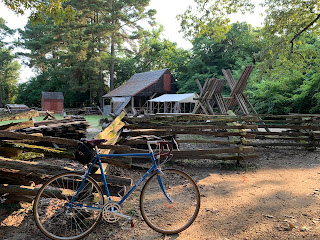 Another bike pic - just outside a paddock where historical re-enactors would be doing demonstrations later  in the day. As folks can see, I brought the Sequoia, which has become a favorite riding mount since its restoration last year. 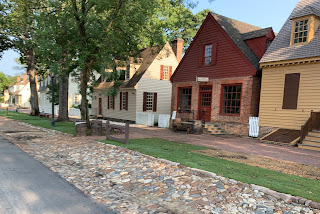 I explored the village some more, riding up and down the various streets, checking out the houses and shops. One thing I found interesting is that Colonial Williamsburg is also a residential community. While some of the houses and shops are open for tours and demonstrations - some of the houses are actually private residences. The foundation apparently owns all the buildings, but they lease some of them out for people to actually live in - primarily some of the village's re-enactors. So it wouldn't be so unusual to see, for example, the village blacksmith emerge from one of these houses in the morning, dressed in period costume, and head off to work.
Just outside the restored village of Williamsburg sits the College of William & Mary, which I learned is the second oldest college in the U.S. (Founded in 1693 - only Harvard is older). 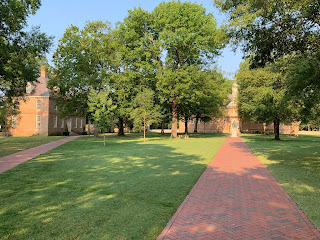 My first stop on the campus was the square where the original and oldest buildings are located. But honestly - the whole campus is gorgeous. Almost all the buildings keep a similar style architecturally, with the same style and color of brickwork. Seriously - even their football stadium is designed to blend in with the historical buildings (at least in as much as a stadium can).
After riding loops around the restored village and the lovely college campus, I headed "home" to get ready for a day of touring and activities with the family. I think my ride was about an hour and a half - and maybe 15 (mostly) relaxing miles.

My next excursion would be much longer. I did some checking about bike routes and trails in the area, and found that we were only about 10 miles away from one end of the Capitol Trail - which runs from the historic Jamestown Settlement to the city of Richmond. It's a little over 50 miles from end-to-end. The trail mostly follows a route beside some of the rural highways, though it is fully separated from them - and at least one section of the trail is on a former railroad line. The trail is paved, well marked, and has mile markers (which can be handy). And again - though many readers may already know it - Jamestown was the first permanent English settlement in North America - and it includes the story of Pocahontas, Capt. John Smith, and all of that - though most versions of that story are highly romanticized and likely inaccurate. All I'm sayin' is that the Disney version is way off. So was the one I learned as a kid, for that matter. 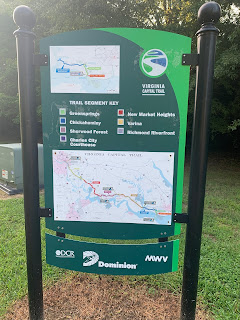 I drove down to Jamestown to start the ride. There was a large parking lot at the trailhead, and parking was free. Though riding the full length of the trail all the way to Richmond would have been great, I did not feel up to a ride that would end up being over 100 miles out and back. I determined I'd ride a respectable stretch of it, and turn back. 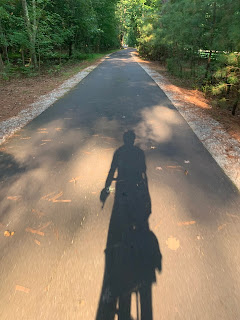 Shadow selfie. Much of the eastern stretch of the trail is flanked on one or both sides by trees - mostly pines, so there were many long stretches of shade, which was nice, since it was going to be a hot day. It was nearly 80 when I started out, and that was at 7:30 am! It would be well into the 90s by mid-day. 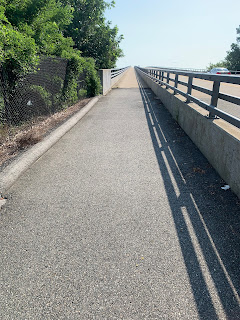 The eastern half of the trail is mostly flat (I was told by a fellow rider I met along the way that it gets a little hillier closer to Richmond). The longest and steepest hill I had to climb was the bridge over the Chickahominy River, which that same rider told me is known as "Mount Chickahominy" by the local riders. At least the path is very wide, and there is a very substantial barrier between it and the car traffic. 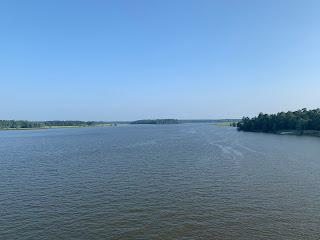 The view from the top of the bridge. Did I mention that I do not enjoy heights? 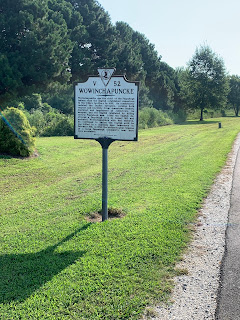 Okay - so there are historical markers or signs all along the Capitol Trail. I didn't stop to read every one of them (there were a lot) - but I did read this one, and it seriously bothered me. In case you can't read the text, here's the short and dirty version: This Paspahegh Indian chief resisted the intrusion of the Jamestown settlers, and their stealing of his tribe's lands - so the English settlers killed his family, and wiped out his tribe, then eventually they killed him in a "skirmish" near Jamestown in 1611. Jeezus.

Upon returning from my ride on the Capitol Trail, I wanted to extend my ride a bit by heading down to James Island. I found that by following the road just a short distance from the trailhead, there is a nice quiet road, called the "Island Road" or the "Island Drive" that takes you on a lovely loop around the island. 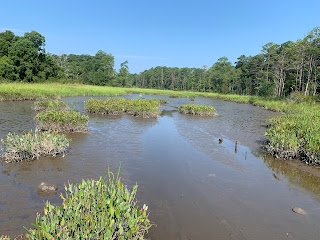 Most of James island is either woods, or tidal marshes. The "Loop" lets you see plenty of both. The tide was out, so the middle of this marsh was lots of muddy bottom and tide pools. 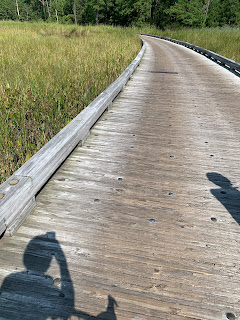 Some of the loop around the island is made up of boardwalks like this one - that extend out over the marshes. 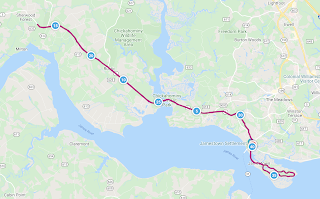 I did map out the day's ride - which ended up at right around 40 miles total. A respectable ride for the day.

That's all I'll cover for now. I'd manage to get out for one more "epic" ride before heading home, and I'll cover that in the next post.