If you read the previous post here in the blog, then you know that my family and I spent about a week in eastern Virginia, soaking up history in a part of the country that's just steeped in it. Well, our vacation is done, and we're back home in Akron - but now I have some time to write about how I spent my last day in VA. 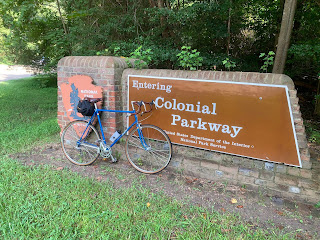 In doing some reading about bike routes and trails in the area around where we were staying, I learned about the Colonial Parkway, which is operated by the National Park Service. The parkway connects the three main historic villages of colonial Virginia - Jamestown, Williamsburg, and Yorktown - all located on the peninsula between the James and York rivers. These villages form what is often known as the "Historic Triangle." The parkway provides a beautiful, natural landscape and scenes, and somehow manages to avoid views of modern development. The roadway is wide and paved in concrete which has a surface of what appears to be river pebbles - which is supposed to make it recall (somewhat) the look of a colonial-era road. There are very few intersections (it usually passes over or under crossing roads) - and instead has "exits" to access the few other roads it actually intersects. For cyclists, the parkway's features, and lack of big trucks, make it an excellent route - though I would highly recommend a steel-framed bike and with tires of at least 32mm (or more) in width, because that "pebbly" surface can really generate some "buzz." Luckily for me, the Sequoia perfectly fit the bill.

The parkway is about 23 miles long from end to end. But for me to ride the whole thing, I needed to turn it into a loop that started and ended at our "home base." I mapped it out and ended up with a ride of almost exactly 50 miles.

My start/end point is at that big red dot, to the north-west of Williamsburg. To ride the parkway, I'd have to ride south to the settlement of Jamestown (which incidentally is also where the Capitol Trail starts, which I'd written about in the previous post) - then east along the James River. Then the parkway heads north to the village of Colonial Williamsburg, and then turns east again to the York river, and eventually to the village of Yorktown. At that point, I'd have to return along the parkway back to Williamsburg, and then take the regular roads back to our home base. One caveat for bicyclists riding the parkway is that in Williamsburg, the road enters a pretty long tunnel that passes completely underneath the restored historic village. Bicyclists are prohibited from riding in the tunnel. It is necessary for cyclists to "exit" the parkway just before the tunnel starts, ride on the surface streets through Colonial Williamsburg, then get back on the parkway. This is hardly an inconvenience because it lets you see the village by bike (which is nice). The National Park Service website offers a suggested route for that little detour - but on the whole, it isn't hard to figure out for anyone with a map. 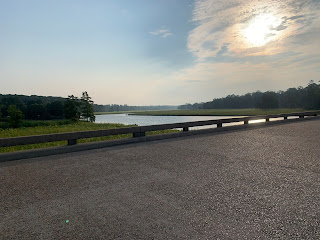 I left "home" at 7:00 am, and arrived in Jamestown at about 7:30. Even at that early hour, the temperature was already in the 80s, with ungodly humidity, so within minutes I was already getting soaked in sweat, and dripping. Here, near the start of the parkway, I had a nice view of a marsh and a creek that flows into the James River. 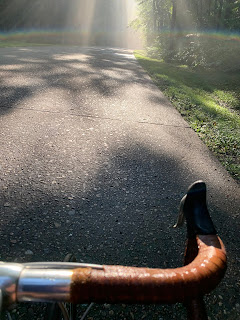 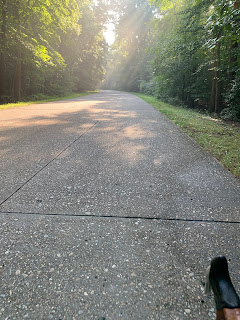 Passing through these wooded areas at this hour, there were these lovely shafts of sunlight streaming through the trees. But the fact that the sunlight is glowing like that is also an indicator of how high the humidity was. Remember - that's water vapor glowing there in the sunlight. These pictures also give an idea of the parkway itself, which as I've said, is nice and wide - but also lacks any lines or lane markings. You can kind of see that pebbly surface I mentioned, which does generate a high-frequency "buzz." Most of the time my tires and frame managed to soak it up pretty well. Traffic was overall pretty light - especially early in the morning. 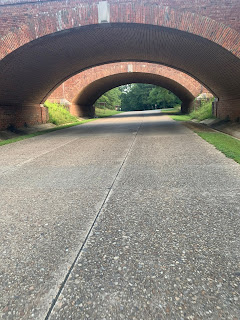 I mentioned above that the parkway has minimal intersections, and either passes over or under crossing roads. Most of the bridges one passes under are built of red brick, like these shown here - giving them an attractive colonial-era look. I should also mention that the parkway is very well maintained. 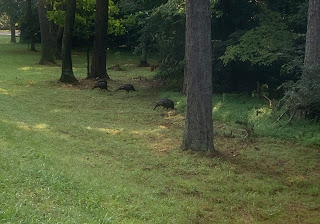 I spotted this flock of wild turkeys along the way. You know - unlike the bloated, genetically engineered domestic varieties bred for Thanksgiving dinners, wild turkeys deserve some respect. They are pretty ugly birds - but they "own" it. They are also clever - and they can defend themselves. It's a good idea to give them a little space. Though the frequently repeated notion that Benjamin Franklin had actually wanted the turkey to be the "national bird" is actually a myth, he did in fact have some thoughts on the subject - expressed in a letter to his daughter. An excerpt: “For my own part I wish the Bald Eagle had not been chosen the Representative of our Country. He is a bird of bad moral character. He does not get his living honestly. You may have seen him perched on some dead tree near the river, where, too lazy to fish for himself, he watches the labour of the Fishing Hawk; and when that diligent bird has at length taken a fish, and is bearing it to his nest for the support of his mate and young ones, the Bald Eagle pursues him and takes it from him. . . The Turkey is in comparison a much more respectable bird, and withal a true original Native of America… He is besides, though a little vain & silly, a bird of courage, and would not hesitate to attack a Grenadier of the British Guards who should presume to invade his farm yard with a red Coat on.” 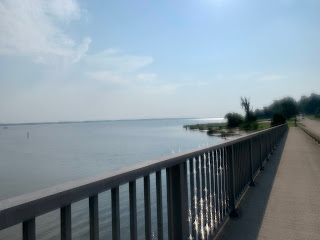 About 25 miles into my ride, I emerged from the woods to my first glimpse of the York River. 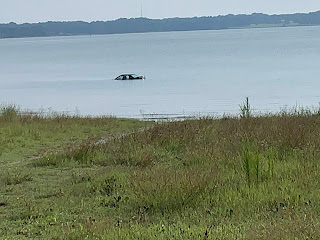 Okay - so this was an unexpected sight. I came around a bend to see the flashing lights of a sheriff's car and a couple of tow trucks - looked out into the river, and saw this car about half submerged in the river. I have no idea how it got out there. I can't imagine a car getting that deep into the river on its own power unless it was really flying when it hit the water. Did it go in at some other point in the river and get pulled further out by the current? Did the driver go out there while the tide was low - then get trapped as the tide came in? (I'm not familiar enough with the area to know if the river is affected by the tides to that extent - but I assume there must be some tidal effects). By the time I'd be on my return ride, they'd have it out. 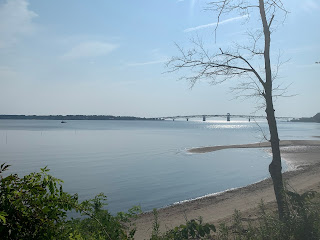 Seeing this bridge in the distance told me I was getting close to Yorktown. That's the Coleman Memorial - US Route 17 bridge from Yorktown to Gloucester Point. It's a moveable "swing bridge" that can open up to allow navy ships access to the Naval Weapons Station on the York River. At this point, I must have been about 5 miles from the end of the parkway. 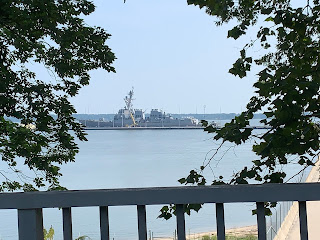 Speaking of that Naval Weapons Station - here it is. 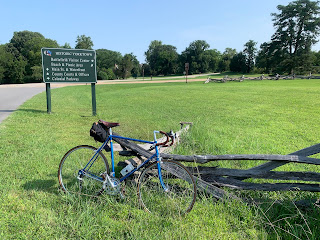 The Parkway ends in Yorktown at the historic battlefield. If folks don't remember from their American History classes, Yorktown was the site of the final siege in the Revolutionary War - where Lord Cornwallis surrendered to Washington in October 1781, thereby ending the war and guaranteeing our independence.
Upon reaching the end of the parkway, I decided to ride around the village of Yorktown to see some of the sights before heading back. It's a lovely little town with some interesting stories. 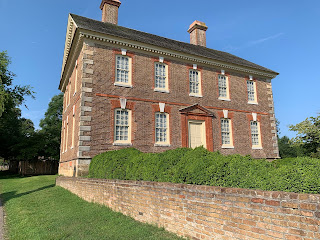 This was the home of Thomas Nelson - signer of the Declaration of Independence, representative for Virginia in the Continental Congress, and a brigadier general in the Virginia Militia - and one of the commanders of American troops in the battle of Yorktown. Later he would be elected to follow Thomas Jefferson as Governor of Virginia. Some interesting history on Nelson, and his home: British troops captured Yorktown in August of 1781, took over the local homes to board their soldiers, and dug in for battle. Being one of the largest and grandest houses in the village, Lord Cornwallis selected Nelson's home as his headquarters. When the American and French forces arrived to battle the British, the American troops, led by Nelson, opened fire on Nelson's own house. Legend has it that Nelson offered a prize of 5 guineas to the first soldier to hit his house. Now that's what we call commitment to a cause. 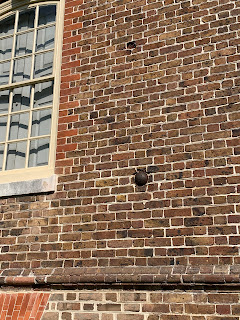 Signs of the battle are still evident all around the Nelson house - with holes and divots all over the outside bricks. Here, you can see a cannonball still lodged in the wall. Too cool. I was also told that the house was used as a hospital during the Civil War, and local legend says the house is haunted by the soldiers who died in it.
Anyhow - Yorktown was a huge tactical mistake for Cornwallis. French ships totally blockaded the York River, bottling up the British Navy, and cutting them off from supplies and reinforcements by sea - while American and French soldiers moved in by land to surround the British forces - then bombarded the hell out of them. The siege lasted a couple of weeks, during which time the British were weakened and ran out of ammunition, food, and men. By October 17th, Cornwallis was asking for terms of surrender. 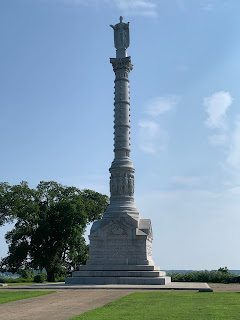 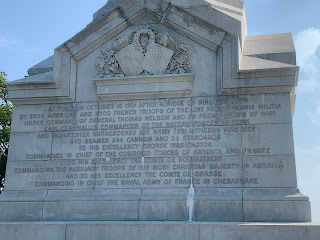 Shortly after news of the victory reached the Capitol, Congress commissioned the construction of this monument. It wouldn't actually be built until 100 years later - which could be seen as evidence that Congress has always moved at a snail's pace. Fun fact: that figure of Lady Liberty on the top of the monument is NOT the original statue from the 1880s. The original figure was struck by lightning in the 1940s, which literally blew her head off. A new figure was created and put in place in the 1950s (apparently with a lightning rod running through it, and a pretty extensive grounding apparatus installed).
Anyhow - after seeing the sights in Yorktown, I went back to the parkway and the ride back to the home base. By the time I was heading back, the temperature was in the mid 90s. I should mention that there are literally no places along the parkway to stop for water or other refreshments - especially on that long stretch (approximately 15 miles) between Yorktown and Williamsburg. So having plenty of water is key. I had an extra bottle in my saddlebag - but by the time I got back to Williamsburg, that was just about gone too. The "Market Square" area in Williamsburg has a number of places to stop for food and drinks - so that was like a welcome oasis.
Well - a 50 mile tour of the historic peninsula was a great way to finish up my vacation in Virginia. The next morning, we faced a 9-hour drive back to Ohio. I'll just wrap this up by mentioning that Virginia is a beautiful area for cycling - with lots of resources and amenities for riders - lots to see and do - and the people I encountered were genuinely friendly. Seriously - I got friendly waves and "hellos" from people everywhere I went. So overall it was a great place to take a bike and explore.
That's all for now - Till next time . . .
Posted by Brooks at 2:10 PM