The Chinese internet service company Baidu, known as the "Chinese Google," has introduced the latest salvo in the battle of "connected" or "smart" bikes. The Dubike, as it's been dubbed, was designed in collaboration with Tsinghua University's design department -- and it looks like it. It bears all the styling hallmarks of a masturbatory design school exercise -- silver, chunky, plastic, seat-tube-less frame (what do design students have against seat tubes?) -- but has enough off-the-shelf componentry hung on it to look like it might just be ready for actual production. 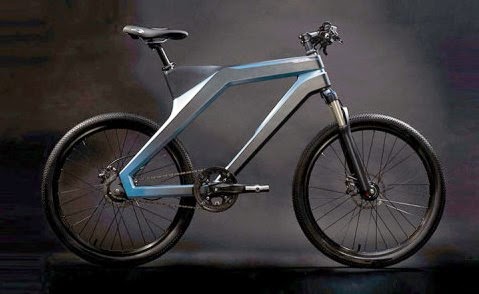 The Dubike has a generator hub that is designed to power all the bike's electronics, such as the built-in headlights, taillights, and various sensors (of which it has many), as well as charging a rider's ubiquitous and indispensable devices. Baidu has created an OS for the Dubike, which has already been released to the public so that developers can create more apps that will sync with the bike and users' smart phones -- not to mention the ever-necessary social media interactions. Supposedly, the bike has all the wiring and sensors available that such apps could track fitness data, power meters, navigation, security, and more -- which seems like a lot of useless data for a bike that looks like it is designed for urban commuters.

Although it looks like a futuristic urban bike (or a design school student's interpretation of the future, anyhow) with its fat tires, flat pedals, flat bars, and off-the-shelf and completely unnecessary suspension fork, something the bike seems to be totally unequipped for is fenders and racks, which would be far more useful accessories for what appears to be the target users. Doesn't it rain in China? Don't Chinese commuters have to carry anything? Apparently not.

Baidu has a pretty slick-looking video available. See it here, or on their website:


The website is in English -- though from what I can find out about the bike, it doesn't seem likely that it will find its way to the U.S.

When it comes to function, it seems that the Dubike, like most other "smart" bike concepts, places more emphasis on unnecessary data overload and social media interactivity than on actually riding the bike. No, this is really more of a toy for riding a couple of blocks on clear, cloudless days to the trendy café to meet up with similarly trendy friends while posting the "experience" on Facebook, or Snapchat -- and tracking all the useless data gathered from that 10-minute ride ('cause if you're not "training" for something, what's the point of riding the bike in the first place?). And if this trendy group does actually gather together, if they're like most smart-phone-obsessed people I see today, they'll sit together not talking, with their eyes glued to their own phones while they text message other people and take selfies. That's really what it's all about, isn't it? Am I being too harsh?
Posted by Brooks at 7:17 AM