The "connected" or "smart" bike thing is chugging along nicely as we start the year 2015.

I just saw a press release from a French start-up calling itself Connected Cycle that starts with this pronouncement:


Turn Your Bike Into a Smart Bike!

Which must mean that all my bikes (and probably yours, too) are "Dumb" Bikes. But don't worry -- all you need to "smarten up" your old dumb bike is a new smart pedal. Like this one:
According to the the company, their pedal is "the first connected pedal." Granted, bicycle pedals have always been connected to the cranks -- but these connect to your phone, and the Cloud . . .

Connected Cycle says their pedal "provides a simple solution to bike theft for regular bike users." Simpler than a good lock? Hmmm. Apparently, the pedals notify the owner any time the bike is moved and the smartphone app can help them to locate their bike at any time. "This location capability not only prohibits theft, but also allows the owner to locate where they last parked their bike."

It must be a really rough night of drinking if you can't remember where you parked your bike. 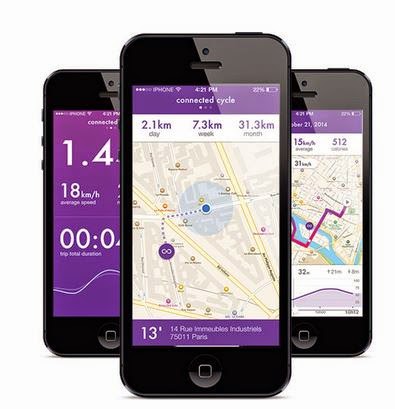 The makers claim that the pedal uses GPS data to record speed, route, and incline. It also estimates calories burned. It then sends that info to the Cloud, where it makes its way back to the user's phone through their special app. It also is supposed to use the pedal's movement to generate its own power, so there is no need to charge the batteries. Users don't even need to have their phone with them, as all the ride data can be downloaded from the Cloud at a later time.

WHAT?!? Go for a ride WITHOUT A PHONE? What century is this? Next thing you know, they'll be trying to get us back on penny farthings.

Just to emphasize that all this "smart" technology is designed for people who are apparently not so smart, the company says that "installation takes less than 2 minutes and doesn't require mechanical skills." Then again, if all anyone knows about threaded components is "lefty loosie, righty tighty," then I suppose left-hand-threaded pedals would present a pretty complicated challenge. Interestingly, the pedals themselves have their own anti-theft measure built into them, which is that they can only be removed with a special key -- probably along the lines of those "locking" lug-nuts for cars, or locking wheel skewers for bikes. Seems surprisingly old-school, but effective.

The pedals are described as having a "robust" aluminum construction, and are available in fashionable colors:

No way to secure your footing on them, though. No clicks, clips, or straps -- so they're definitely for high-fashion, low-speed city riding. Even for that, though, I see an issue in that I find it unlikely that these one-sided pedals are likely to stay tread-side-up -- so have fun getting going while wearing such cycling-appropriate footwear as this: 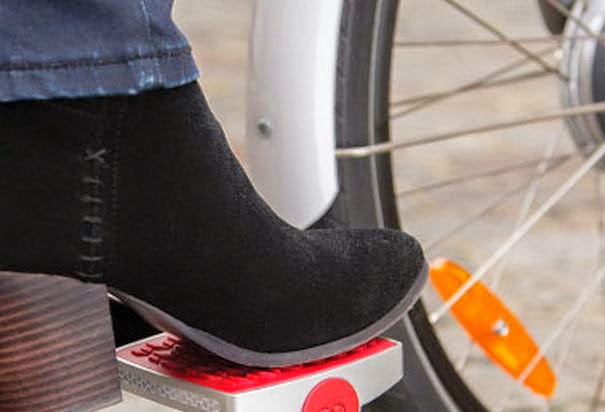 I'm so glad the pedals are smart. 'Cause somebody out there definitely is not.