After that ridiculous Velo News list of "Top 10 Technical Innovations of All Time" -- which could more accurately have been named "Top 10 Gimmicks of Recent Memory," or perhaps "Top 10 List Created By A 20-yr-old Intern" I present the Retrogrouch's Top 10 Bicycling Innovations of All Time. In coming up with the list, I considered suggestions by friends on the Classic Rendezvous group, and readers of The Retrogrouch. I also considered the long-term impact of these creations, not only for the bicycling world, but also for other non-bicycling applications. Several of the top items on my list may have been originally developed for bicycles, but have had a huge impact well beyond their original intent. Like any attempt to put together a Top 10 list, mine will probably generate some disagreements, but here it is. 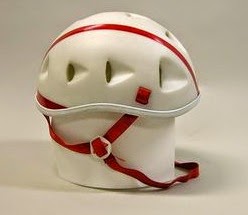 10. Effective Bicycle Helmets: Remember leather hairnets? They were light, and reasonably comfortable, but given the intended purpose of a helmet -- keeping your noggin from getting cracked up -- they were kind of pointless. In the mid-70s, Bell introduced the Biker, made with expanded polystyrene foam and a hard plastic shell. Yes, it was a bit heavy (a little over a pound), and ventilation was only so-so, but it was an effective bicycling-specific helmet and opened the gates to numerous imitators and gradual improvements. About 10 years after the Biker, Giro introduced the original Prolight, which dispensed with the hard shell and dropped the weight further, to the point where helmets today typically weigh around 300 grams or so. The benefits of a helmet may be debatable -- certainly, they don't deserve the nearly religious zealotry that some people give to them -- but at the very least, a good helmet might just keep a minor spill from ruining your life. 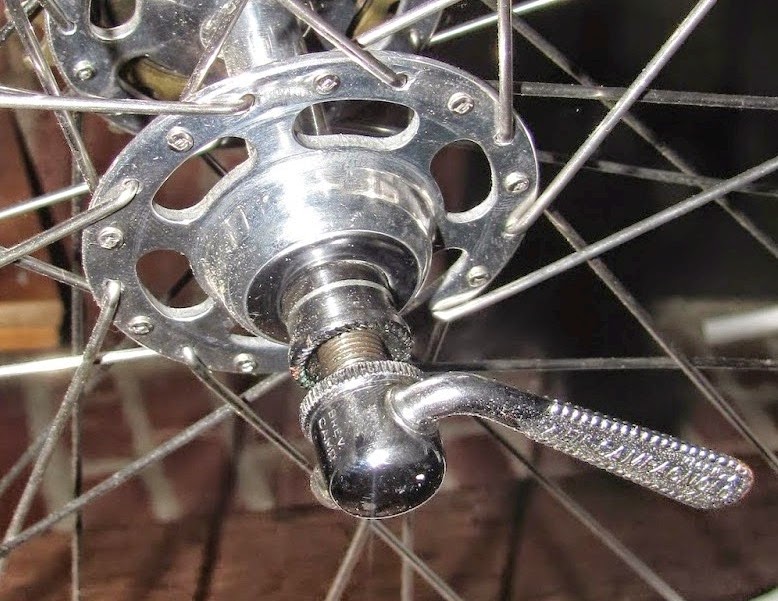 9. Quick Release Hubs: We are all familiar with the legend of Tullio Campagnolo and the Croce d'Aune Pass, and how he invented the quick release lever. It's a great story, though some suggest that it might well be just that -- a story. Heck, I've even read slightly different versions of the story put out by the Campagnolo company itself. Nevertheless, there's no denying that the simple quick release lever is a great invention that makes tire and wheel changes considerably easier. Some have tried to "improve" the design by making open-mechanism versions, but the classic closed-cam quick release that we've come to know since the 1930s is tough to improve upon. 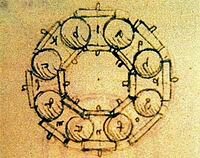 8. Ball Bearings: The basic concept of bearings goes back to ancient times. And even DaVinci sketched a ball bearing mechanism that would look pretty familiar to us today, though it was never made (see right). The first recorded patent on ball bearings was given to Philip Vaughan, a Welsh iron master, in 1794. But modern radial-type ball bearings, made of steel, are generally attributed to Jules Suriray, a French bicycle mechanic. Suriray installed his bearings into the bicycle that won the first Paris-Rouen bicycle race in 1869. And from that time, ball bearings as we know them were indelibly linked with the growing bicycle industry. Ball bearing mechanisms in our hubs, pedals, bottom brackets, and headsets, all combine to help make a bicycle the most efficient mode of transport available. 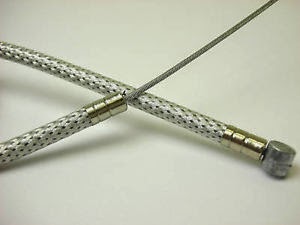 7. Bowden Cables: Brake cables, as we know them today, with their inner cable sliding through a compression housing, are called Bowden Cables, and they have had all kinds of applications in cars, aircraft, and industry for over a century. There is some dispute as to whether the Bowden they are named after was the Englishman Frank Bowden, founder of Raleigh Bicycles, or the Irishman Earnest Bowden (more likely the latter) -- but either way, there is no dispute that the cable was originally created for bicycle brakes right around the turn of the 20th century. Without the cables, we'd all be stopping our bikes with rod brakes. 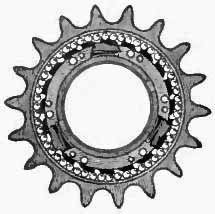 6. Ratcheting Freewheels: Despite the recent (but fading) trend toward fixed gear riding, the fact is, it's nice to be able to coast sometimes. The ratcheting mechanism that makes that possible has been part of bicycles off and on going back to the mid 1860s. Whether it is the older style threaded-on freewheel, or the more modern cassette, the basic ratcheting mechanism is a great invention.

5. High-Strength Alloy Steel Tubing: The introduction of Reynolds 531 manganese-molybdenum tubing in 1935 was a major breakthrough for performance-minded bicyclists. Lightweight, thin-walled tubing was possible, which lowered the weight of bicycles without compromising strength. Competing brands, like Columbus, Vitus, Tange, and others have given framebuilders and consumers more choices, and other alloys were introduced, like chrome-moly, and more recently, air-hardening alloys. Today, carbon fiber, aluminum, and titanium have all made steel almost a rare sight in the bike shop showrooms -- but to my mind, there is still nothing that beats steel for strength, durability, reliability, safety, and cost. When it's lugged and brazed by a good builder, there's nothing more beautiful, either.

4. Parallelogram Derailleur (With Extra Credit to SunTour for the slant parallelogram): The ability to shift gears tremendously increased the range and efficiency of the bicycle. And while there have been numerous systems and mechanisms devised over the years to make multiple gears possible, none can match the parallelogram design for its simplicity, durability, and efficiency. The chainstay-mounted Nivex of 1938 was likely the first, or at least the first to be considered successful. The dropout-mounted Campagnolo Gran Sport was the real game-changer, though, as it became the design that virtually all others would copy and/or attempt to improve upon. In 1964, SunTour introduced the slant parallelogram, which canted the mechanism at an angle that allowed it to better follow the profile of the freewheel cogs, improving its shifting performance across the range. After their patent expired 20 years later, the slant parallelogram became the standard for all derailleur designs, and is still the best system for changing gears. 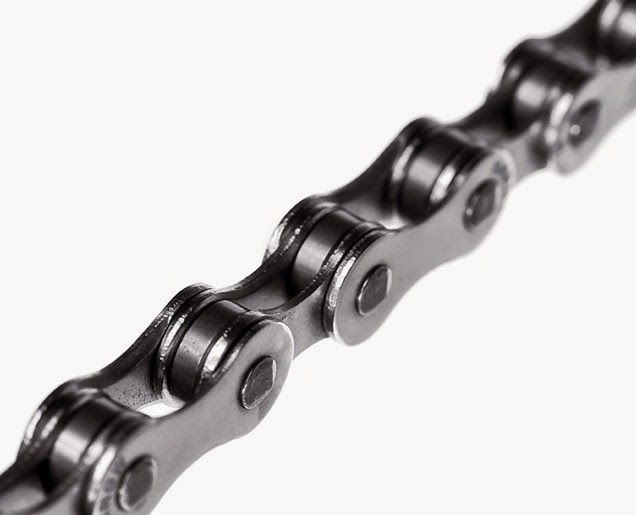 3. Roller Chain: It took a while to come up with a good means for transmitting power from a bicycle's pedals to its wheels, apart from having the pedals attached directly to the wheel, as in the penny-farthing. But the creation of the roller chain in the late 1800s gave us what is still probably the most efficient power transmission system available -- some studies say it is well over 98% efficient. Not only that, but the bicycle chain turned out to have all kinds of applications apart from bicycles, including use in motorcycles, cars, and industrial machinery.

2. Wire-spoked Wheels: The tensioned wire-spoked wheel is a remarkable invention from an engineering standpoint, with incredible strength for its weight. Just try to imagine riding on wooden wheels! The invention of tangental spokes, which increased strength and durability, is generally credited to James Starley, whom some consider to be the father of the bicycle industry in Britain. His nephew, John Kemp Starley, is credited as the inventor of the safety bicycle.

1. Pneumatic Tires: The wire-spoked wheel was a good invention, but it didn't become truly great until the solid rubber tires were replaced by John Boyd Dunlop's pneumatic tires in 1887. Dunlop was originally a veterinarian, but developed the pneumatic tire to improve the comfort of his son's tricycle. With that invention, the bicycle as we know it today was basically complete. The diamond frame safety bicycle, invented just a couple of years earlier, equipped with wire-spoked wheels, roller chain,  ball bearings, and pneumatic tires, was an incredibly efficient machine, and was not appreciably different than the bicycles we ride today -- any differences between then and now are more "evolutionary" than "revolutionary."

Not only that, but I put pneumatic tires at the number one spot on my list because of the way they revolutionized all kinds of products and machinery far beyond bicycles. Wheelchairs, motorcycles, cars, trucks, aircraft, even the space shuttle -- all were greatly improved (perhaps made possible in part) by Dunlop's tires. Many attempts have been made to improve upon them, but none could be considered successful.

So there you have it -- a Retrogrouch Top 10 list. Notice that most of the things on the list pre-date the 20th century, while a couple date back to the 1930s. The only one created in my own lifetime was the EPS bicycle helmet. What does that have to say about the importance of carbon fiber or power meters? Not much, I guess, and I'm OK with that.
Posted by Brooks at 12:01 PM