Today I'm retro-grouching about a different kind of new technology. Let me describe a scenario:

Guy walks into a bike shop, looking for shoes. The sales associates help him with several models and different sizes. They may even let the guy try the shoes out on a demo bike out in the parking lot. The guy then thanks the staff for their help, and leaves without buying the shoes. Why? He's going to buy them online.

Retailers call it "showrooming," and it's a pretty common (and crummy) practice. It affects lots of brick and mortar businesses, it's been around (in one form or another) for decades, but with today's smartphones it's easier now than ever before -- one can now purchase something from Amazon.com before they've even left the store they're in.

How common the practice of showrooming is, and its effect on businesses is a little hard to figure out for certain. I found a study on Internet Retailer.com that said about 43% of shoppers engage in the practice of showrooming -- it's more common with younger buyers, less so with older ones (whod've guessed?). Electronics retailers are apparently the most likely to be affected, according to surveys. But it is something that affects many brick and mortar shops. 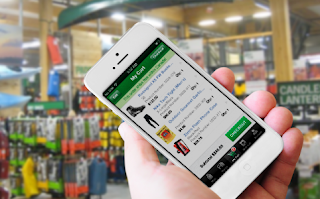 For bike shops, I'd say the practice started to become common in the 70s and 80s when people would shop items at their local shop, then buy them from one of the mail-order catalog businesses that started getting big at that time, like Bikecology, Bike Nashbar, and Performance. Of course, the main attraction was lower prices, but the local bike shops still offered convenience that the mail order businesses didn't necessarily have. I remember talking with bike shop owners back in the 80s about the catalog businesses, and they would say they definitely felt an impact, but they also felt like they could hold their own against that competition.

With the rise of popularity and the ease of ordering on the internet, these kinds of shops have really taken off -- Nashbar and Performance made the move to internet sales, and countless other companies have added a lot of "virtual shopping" competition. Overnight deliveries from FedEx have even reduced some of the "gotta have it now" advantage that local shops had over their internet competition.

Showrooming has gone to a new level recently with apps for smart phones. Internet retailing giant Amazon introduced one of the first such apps. To use it, all one has to do is scan the UPC code on the item, and then the person can instantly purchase the same item from Amazon, probably for less money, and likely with no sales tax. Now there are lots of similar apps, some of which don't even require scanning a code -- some allow a shopper to simply take a photo of the item, and the app will find it for them.

I asked a friend, Kevin Madzia at one of my local bike shops, Century Cycles in Peninsula, OH, about the practice. Kevin is a sales and bike fit specialist at the shop, and also does the shop's website and blog. He said, "Showrooming definitely takes place and has an effect on us, but it would be impossible to quantify exactly how much." One of the things that makes it difficult to know the effect is that unless someone is brazen enough to whip out their smartphone and scan the item right in front of the salesperson, you can't know for sure if they're even doing it. Surveys seem to be the only way to know how much people engage in the practice, and who knows how accurate of a picture those give?

According to Kevin, some kinds of products are probably more prone to showrooming than others. "One that stands out in my mind is shoes and pedals. Even among entry- to mid-level customers, that seems to be something that people spend a lot of time thinking about before they buy, for good reason, and so some of them tend to become a little better informed about what's available and prices. Another factor may be that shoes tend to be more sensitive to variations in size (not as straightforward compared to shorts and jerseys), so people tend to practice showrooming with them more often."

There are a lot of stories published on the topic of showrooming -- just Google the word, and start reading -- but when I read comments that follow some of the articles, I'm frankly shocked and want to shake some people. One comment I found said essentially, "yeah, it's not fair to the store, but it's a tough economy, and you have to save money where you can." That article/comment wasn't particularly about bike shops (none of the articles I found was -- they mostly talked about big stores, like Best Buy and Target) but it was a pretty common response. And when it comes to bike shops, all I can say is -- great, you saved some money on your shoes, but is Amazon going to fix your bike when your bike shop closes?

Oftentimes, brick and mortar shops just can't match the prices of some of the online stores, so the best thing they can do to combat showrooming is to offer the best service possible. Again, CC's Kevin Madzia: "Even those first-time clipless pedal/shoe buyers, because of their trepidation, often end up buying from us because of our advice and ability to explain the different types of pedals and how to select the right ones, get used to them, etc. We explain to them that we'll install the pedals for them, set up the cleats on their shoes, and set their bike up on a stationary trainer to let them get used to using them. A person who buys pedals and shoes elsewhere won't get this same level of attention, at least not for free."

As the holiday shopping season approaches, I would definitely want to urge people to support their local shops. Seriously, speaking just for myself, there is nothing I'd rather get for Christmas than a gift card from my local bike shop (are my in-laws reading?). When it comes to internet sales, it's one thing if the online retailer offers something unique that the local shop doesn't carry. But physically going into a shop, looking over the merchandise, comparing, asking questions and getting advice from the staff -- and then buying the same item somewhere else to save a few bucks just really crosses a line for me.

Addendum: A few days after posting this article, I read this opinion piece on BikeRadar.com that seems to fit in with what I was saying here. Why Brick and Mortar is Still Relevant
Posted by Brooks at 5:34 PM