The Art of Bicycles

I don't just like bicycles. I like almost anything to do with bicycles. In my home, as much as I'd like to be able to have classic vintage bicycles hanging on my walls, above the sofa, over the fireplace mantelpiece, etc, my wife won't really allow that (some women can be so unreasonable) so as sort of a compromise I have a collection of vintage bicycle advertising posters.

In the early days of bicycles, it was pretty clear from the advertising that people thought of bicycles as something pretty special. Frequently the images emphasize beauty, speed -- sometimes even flight -- and have highly romanticized, nearly mythological themes. Here are some of my favorites:

The next three, Fernand Clement, Cycles Sirius, and Falcon, all have kind of a similar theme to the Cycles Gladiator poster above, with ethereal goddess-like women, and a hint of flight -- or at least the possibility of flight. As I mentioned, flight is a common connection in a lot of these posters. Should it be any wonder that the Wright brothers got their start building and fixing bicycles?
. 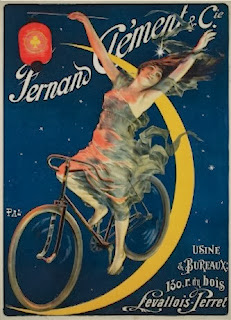 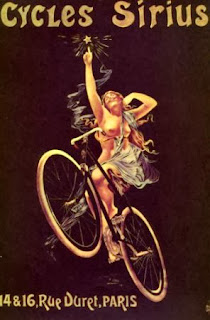 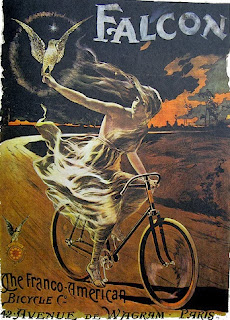 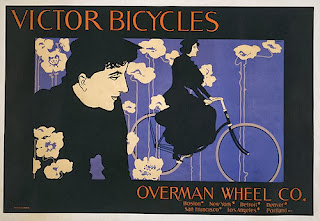 Some of the posters, like these ones shown below, highlight the industrial aspect of the bicycle, giving the impression that the great machine is forged from great fires.