In a post about my trip to Alaska last year, I mentioned how I kept finding myself wanting to ride my bike -- but my own bike was all the way back in Ohio. I was able to rent a couple of bikes -- but one never knows what they're going to get when they rent a bike, assuming rental bikes are even available. It was on that trip that I decided I really wanted to get a bike that I could travel with. After looking into a few different options, I chose a Bike Friday. Let me tell what options I looked at, and why I chose the Bike Friday.

First off, what was I looking for? I wanted something that would pack easily and compactly into a hard case that meets airline standards for checked luggage. I wanted a bike that would fit like my favorite road bikes. I also wanted something that uses mostly "normal" components -- as opposed to the proprietary components that are common on some folding bikes. Here's what I looked at. 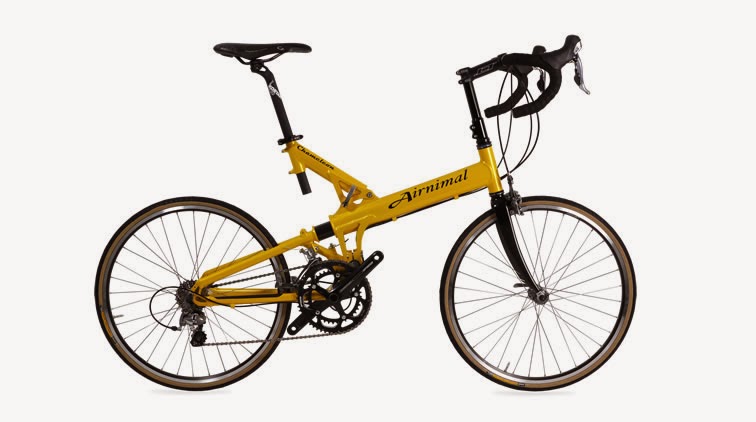 Airnimal Chameleon: The Airnimal is from the U.K. and is billed as a serious road bike that can be packed for travel. The Airnimal uses 24-in. wheels, which are supposed to offer a good compromise between easy packability and familiar handling. The frame is aluminum, with an elastomer suspension built into the rear triangle. The fork is carbon fiber (I was not crazy about that feature). Frames are available in two sizes, then one can fine tune the fit with different stems or seat posts, etc. Airnimal claims the small will fit riders from 5' to 5' 11" and the large would fit a range from 5' 10" to 6' 4". The bike takes all "normal" componentry -- so getting parts for repairs, replacements, or upgrades would be no problem. It's available as a frame set, or as a complete bike with several component level choices. For traveling, the bike is supposed to pack into a surprisingly small space -- I saw articles and videos showing that it can fit into the same little case made for the Brompton folding bikes which are well known for their "pack-ability" -- which is surprising since the Brompton only uses 16-in. wheels! Styling-wise, the bike is far from traditional-looking, but that isn't really a concern for me for a traveling bike, as long as it meets my requirements listed above. Compared with a lot of bikes today, especially all the time-trial and triathlon bikes out there, it looks almost normal.

So why didn't I get the Airnimal? For one thing, they have virtually no dealer presence in the U.S. From what I could find, there are only one or two dealers in the whole country. That's not necessarily an issue by itself, as I could always buy the bike and have it shipped. Secondly, reading some of the articles, reviews, and message boards, I found lots of positive reviews of the bike, but I also found a few reports of problems with cracked frames. I doubt that is a widespread problem and it's very likely that it would never happen -- but considering the lack of dealers, imagine the hassle one would have to go through if it did. 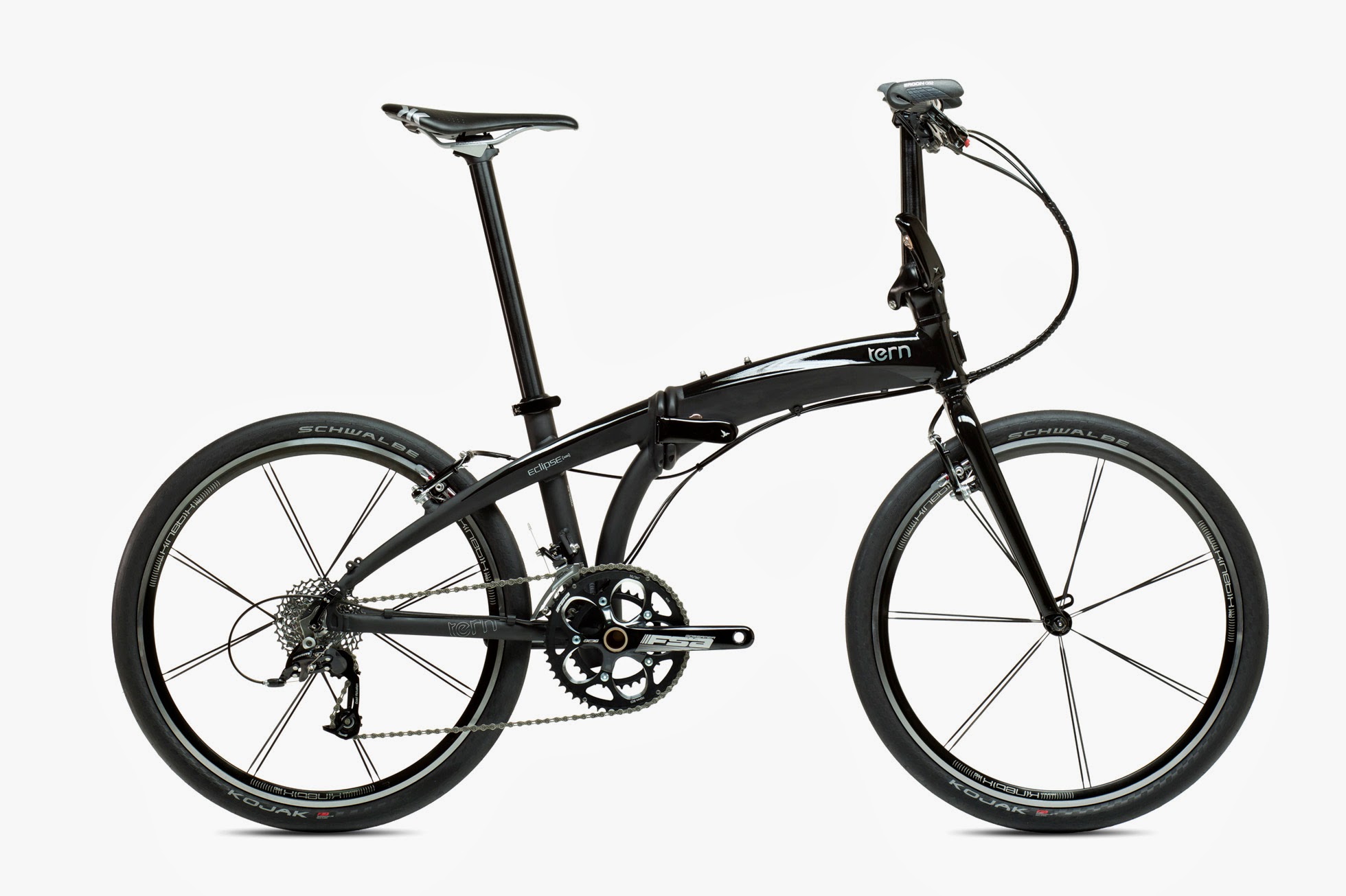 Tern Eclipse X20: Tern is a relative newcomer in folding bikes, but they have a familial relationship to the very well-known brand Dahon. The Hon family, which founded the Dahon brand, went through a family and business breakup a few years ago, the result being the introduction of Tern Bicycles. Though some of the designs bear a certain resemblance to some of Dahon's better models, the Terns are supposed to have made some improvements in design, construction, and materials. The Eclipse X20, like the Airnimal shown above, uses 24-in. wheels, and is billed as being a pretty serious performance bike. The frame is hydroformed aluminum with a large hinge in the middle. While a lot of Dahon models, and some of the less expensive Terns, use a fair number of proprietary parts (such as unusual derailleurs, narrower front hubs, and unusual handlebar stems), the X20 uses mostly "normal" components, and some good-quality ones at that (like American Classic hubs!). However, the unusual stem is still there -- and I was concerned that it would make changing handlebars a real challenge. The bike comes equipped with a flat bar and some bar ends -- it is unclear to me if it would be possible to install drop bars if I decided I wanted them. The bike is more or less a "one size fits most" proposition. It does have a fair amount of adjustability built into it for saddle height and handlebar reach. There are no Tern dealers in my area, so it was impossible to determine if I would like the fit. The folding operation on the Tern is super fast and easy. A couple of large latches unlock the joints in the frame and the stem, and the bike folds up like a letter Z.

In the end, I decided against the Tern. The bar/stem compatibility was a potential issue for me. But more importantly, I had concerns about packing the bike for travel. Even though the Tern folds easily and fairly compactly (it was designed for commuters and urban dwellers with small apartments), it was not clear to me that it would fit into an airline regulation case. The case that Tern offers for their 24-in. wheeled models is slightly larger than the regulation size for checked luggage. Exceed that limit, and one can pay at least $100 extra each way when flying! (it depends on the airline -- some charge even more). Checking around with dealers online, I couldn't find anyone who could assure me that it would fit into a smaller case.

Brompton: People love them, but I didn't give much consideration to Bromptons. It seems to me that the real attraction is that they fold fast and super compactly -- great for commuters who use trains and other public transit. But I don't see the Brompton as a particularly serious road bike.

Surly Travelers Check/LHT Deluxe: Of all the choices out there for a traveling bike, the Surly would probably seem to be the most appropriate for a Retrogrouch. It is basically a "normal" bike that has S&S couplers so it can be taken apart with and packed up into a special case (I believe the S&S case is around $400). So why didn't I get the Surly? At the time I was looking into the bikes, Surly had discontinued the Travelers Check (which was based on their Cross Check cyclocross bike), and I didn't realize at the time that Surly was coming out with a new version based on the Long Haul Trucker touring bike. The LHT Deluxe comes only with 26-in. wheels, which can be equipped with relatively narrow road tires -- but will probably pack slightly easier than 700c wheels. If one wants to get a bike packed into an airline regulation case (one that can fly without extra fees), the biggest issue to getting "under the limit" is the wheel size, but apparently it can be done. Available only as a frameset, the Surly could be equipped as retro-grouchy as anyone could want. I suppose if I hadn't already committed to the BF, the Surly would be a great choice, but for ease of packing, it would still be hard to beat the Bike Friday.

Bike Friday: The Bike Friday is made by Green Gear in Oregon. That right there was a good selling point for me. Even though they don't have a dealer in my area, the company is known for good service over long distance, and talking with them on the phone I found them very helpful.

The Bike Friday uses 20-in wheels, with a chrome-moly steel frame that folds and disassembles to pack into a standard hardshell suitcase. That means no extra fees for airline travel. The frames are available in a range of sizes, and can even be custom built for the individual needs of the rider. One of the selling points of the Bike Friday is that it can be built to match the riding position of one's favorite road bike. Even though it looks pretty unusual, the bar/saddle/crank relationship is the same as my "normal" bikes. I did wonder about the handling with such small wheels. On the whole, it is not hard to get used to. The small wheels change direction more quickly than larger ones, so I'd describe it as "zippy," but otherwise, it's feels pretty good. Small wheels also don't roll over pavement imperfections as smoothly as larger ones, but I got mine with larger-volume touring tires to help with comfort.

Another thing about the Bike Friday is that it takes mostly "normal" components. Replacing or upgrading parts should be no problem. One exception is the rear hub, where I made the choice to get the Shimano Capreo cassette with its diminutive 9-tooth cog. That gives me a high gear comparable to a 700c-wheeled bike. I'm not sure how common these are should I need a new cassette far from home, but the inner workings of the hub are pretty similar to most Shimano cassette hubs, so basic service should be straightforward for any competent bike shop.
While the look of the Bike Friday with its little 20-in. wheels takes some getting used to, I've already mentioned that I wasn't really concerned about traditional looks for a traveling bike. One exception was that I specified traditional silver-alloy components wherever possible. I also specified bar-end shifters because they are simple, rugged, work well, and I just like them. I do use integrated brake/shift levers on a couple of my bikes (Campagnolo Ergo -- because they're rebuild-able) but I like the simplicity of bar-ends and wanted them on this bike. And the Dura-Ace ones are fantastic, so why not?

Some great things about the Bike Friday: The bikes are custom built and equipped for the customer. The ordering process involved me giving them lots of body measurements, as well as certain key measurements taken from my favorite road bike, so they could get the fit right for me. I was able to select components from a wide selection of choices -- including lots of mixing-and-matching. Ordering direct from the company was actually quite easy. If I have a serious problem with the bike -- like something requiring the warranty -- I know I can get it handled easily, even without a local dealer.

I did a lot of research into the bikes I considered -- and I could find nothing but positive reviews of the Bike Friday. On message boards, when I posted questions about the different choices out there, I had more than a few people say "just get the Bike Friday -- you won't regret it." So far, that seems to be the case.
Posted by Brooks at 8:25 AM