In my previous post, I looked at the evolution of Campagnolo's post-war classic-era derailleurs, from the Gran Sport through the C-Record. That basic parallelogram design was the mainstay of Campagnolo's derailleur line for about 40 years! Not only that, but it inspired many copies -- some that borrowed only a little, and others that were practically clones of varying quality.

Campagnolo's Gran Sport, originally introduced in 1949, is sometimes credited by people as the first parallelogram-type rear derailleur, but that's not exactly true. According to Frank Berto's excellent bicycle history, The Dancing Chain (Cycle Publishing/Van der Plas Publications), that distinction actually belongs to the French Nivex touring derailleur of 1938. I've never seen one up close, much less tried one, but according to Berto as well as Bicycle Quarterly's Jan Heine, it was a really nice-shifting piece of equipment. But it was very different from the Campagnolo Gran Sport -- mounted on the chainstay, well ahead of the rear axle and with the parallelogram oriented horizontally. Wheel changes could be a bit complicated, but were simplified somewhat by using a rear hub with an innovative split axle. Nevertheless, one could reasonably say that the Campagnolo Gran Sport was the first parallelogram derailleur to gain widespread acceptance by racers, as well as becoming a much more influential design overall.

Notable competition came from Simplex, who in 1961 released a design which at first glance bore a basic resemblance to the Campagnolo -- but it was not exactly a copy, as much as it was an "inspired" and "improved" competitor. The JUY Export 61 was the first Simplex to use the parallelogram structure -- but improved on it with the addition of a spring in the top body pivot to help it more closely track the freewheel cogs. That spring-loaded pivot had long been a part of Simplex derailleur designs going back to their pull-chain plunger-action models. The Export 61 was well made, nicely finished, and the extra spring reportedly helped it to shift better than the Gran Sport or Record models from Campagnolo.

Unfortunately, the Export 61 was only made for a year or two when Simplex decided to recreate the design in "Delrin" industrial plastic -- released as the "Prestige." Somebody apparently thought that it would be great if a derailleur could be bent and twisted without breaking -- but flexibility is generally not a hallmark of a good shifter. I know if I disparage the Prestige too much, somebody is going to say that it was their all-time favorite derailleur. I admit I have limited experience with them -- but every one of them I've encountered was mounted on a low-cost bike-boom era 10-speed, beaten and worn to the point of disfunction, and suitable for nothing but the trash. Someone will probably say they shifted great when new, right out of the box, but I unfortunately never had the pleasure (?) to try one in that condition. I should point out that I've also encountered lots of old Nuovo Record derailleurs that had obviously weathered similar abuse and neglect, and while cosmetically trashed, still functioned just fine. The most I ever had to do to one was replace a bent pulley cage, and it's worth noting that not only could I easily find a replacement cage, but the operation was pretty simple. 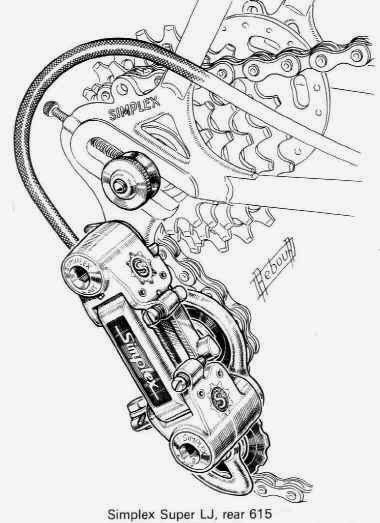 Eventually, Simplex ditched the plastic and released a derailleur designed and built to restore their reputation: the Super LJ, circa 1972-3. It was all-alloy, attractive, strong, and shifted about as well as a traditional parallelogram derailleur can shift. The Super LJ, paired with the great Simplex Retrofriction shift levers, could make for a nice-shifting set. Unfortunately, the plastic derailleurs damaged the company's reputation enough that the Super LJ wasn't enough to bring it back in the minds of many riders.

Still, the Simplex design was very influential in its own right. Even though it appeared to copy Campagnolo, the spring-loaded top pivot helped the derailleur track the cogs better, keeping a better chain gap all across the freewheel. That little detail was picked up by Shimano for many of their derailleurs (such as the Lark series), and was eventually combined with the slant-parallelogram structure (invented by SunTour, circa 1964) to kick off the index-shifting era.

There were a number of companies that made derailleurs that borrowed so heavily from the Campy designs, that it's hard to think of them as anything more than clones. Some were pretty well made and are even sought after by collectors. Others were notable only for how awful they were.

One of the better imitators was Zeus of Spain. Although even in calling them an imitator, I'm probably going to get some push back from some serious Zeus fans out there.  Zeus made a full range of components, and even frames, and some of their component designs were, in fact, unique or perhaps even innovative. But looking at the Zeus Criterium rear derailleur of the 1960s, it's hard to make an argument that they were doing anything more than copying an existing design. Even some of the visual, stylistic details, such as the logo design on the face plate, are clearly drawn from the old Gran Sport or Record. Still, it was reasonably well executed, and the company still has a loyal following among collectors.

Some later derailleur designs from Zeus, such as the Racer and the 2000, clearly got their inspiration from the Super Record, though they are not quite exact copies right down to every small detail. But the black and silver combination was definitely intended to call to mind the look of the Super Record, and the general design was still pretty much the same. The 2000 model even included some titanium bits and a drilled pulley cage to reduce weight.

A company that was less successful in copying the Campy derailleurs was Triplex -- also from Spain. Triplex had several Campagnolo clones, but they were typically crude, with poor finishes and numerous cost-cutting touches. One can occasionally find their Nuovo Record clones on eBay, but the only reason I could see for buying one would be to have it as a somewhat ironic paperweight. I've never used one, but looking closely at them in pictures, one can see uneven gaps at the pivots, and I've read reviews that mention weak springs and other flaws that would probably make them work as poorly as they look.

My "favorite" Triplex clone would be their C-Record copy from the mid-80s. Somehow, the smooth, aerodynamic look of the C-Record doesn't translate well when done with cheap materials and haphazard finishing.

In the 1970s and 80s, Galli, of Torino, Italy, made a pretty respectable alternative to the Campy Nuovo Record/Super Record. The Galli Criterium borrowed a lot from the Campy design, but toned down some of the visual details, although the styling changed through a few variations during the production period. The later ones actually bear more resemblance to Campy than the earlier versions. These were also available in anodized colors -- I've seen them in gold, red, green, and blue. The Galli got good reviews at the time it was produced, as testers felt it shifted about as well as the Nuovo/Super Record, and was finished comparably. Complete Galli gruppos were available through joint efforts between Galli, Stronglight, and Maillard.

Ofmega, of Italy, made an interesting -- albeit quirky -- derailleur that used the basic parallelogram architecture, but rendered it in colored plastic with a look that can only be described as unique. They were very much "of their time" -- made in the 1980s. The Mistral was rounded and smooth, and available in black, gray, blue, pink, and yellow. According to Velobase.com, the blue was called "Squadra Azzura," the pink was "Maglia Rosa," and the yellow was "Maillot Jaune." (The yellow version always reminded me of a banana). The plastic would fade and lose its color over time, and I really don't know why anyone still thought plastic was a good material for bicycle parts, but fans of the Mistral (and they are out there!) insist that it is not the same as the "Delrin" plastic used on the old Simplexes. Then again, carbon fiber components are at least partially plastic, too.

There were plenty of other copies, clones, and imitators out there -- from Italy, Spain, Germany, Japan -- pretty much anywhere that manufactured bicycle parts. The ones I've shown are just a sampling. In the end, as innovative as it might have been in the 1950s, the standard parallelogram design just didn't hold up in the era when most people were demanding indexed shifting. Something I find interesting is to look at the modern derailleur and see how it evolved from the innovations of the past. Take the parallelogram design, created by Nivex; hang it from the dropout as Campagnolo did (and popularize the hell out of it!); drop it down into a more horizontal position, like Shimano; slant the parallelogram to follow the profile of the cogs, like SunTour; and incorporate double spring-loaded pivots, like Simplex -- And you have today's flawless-shifting derailleur.
Posted by Brooks at 2:05 PM