Searching through vintage bicycle components on eBay today, I spotted a very rare and interesting item: An Austrian-made Suwe Cortina rear derailleur from about 1954. It was listed at just under $400. It's the kind of thing one doesn't often see outside of a book.

The Cortina is obviously not a well-known derailleur, but its design and construction had a lot going for it, especially given the time period in which it was made. The basic design borrowed quite a bit from the groundbreaking Nivex, introduced in 1938, which should be considered the grandfather of parallelogram derailleurs. Looking at the pictures, it is clear that, like the Nivex and other touring derailleurs, the Cortina mounted to the right chain stay, ahead of the rear axle. The backwards-facing, horizontal orientation of its parallelogram would move the jockey pulley away from the freewheel cogs as it moved inward -- thereby keeping a consistent chain gap across the gear range, which is critical for positive shifting performance. Having never ridden a bike with one, I still think it a pretty good assumption to say that it probably shifted quite well for 1954 (probably not bad for 1984, either).

Although it was almost certainly inspired by the Nivex, the Suwe Cortina made some notable changes to that design. For one thing, while the Nivex was all stamped construction, the Cortina was mostly aluminum and appears to have used a combination of stamped and cast pieces. It has a more "substantial" look than the Nivex, and appears to be nicely finished. Another change is that unlike the Nivex, which used a 2-cable "desmodromic" actuation (that is, movement in both directions is controlled by cable pull), the Cortina has a return spring. 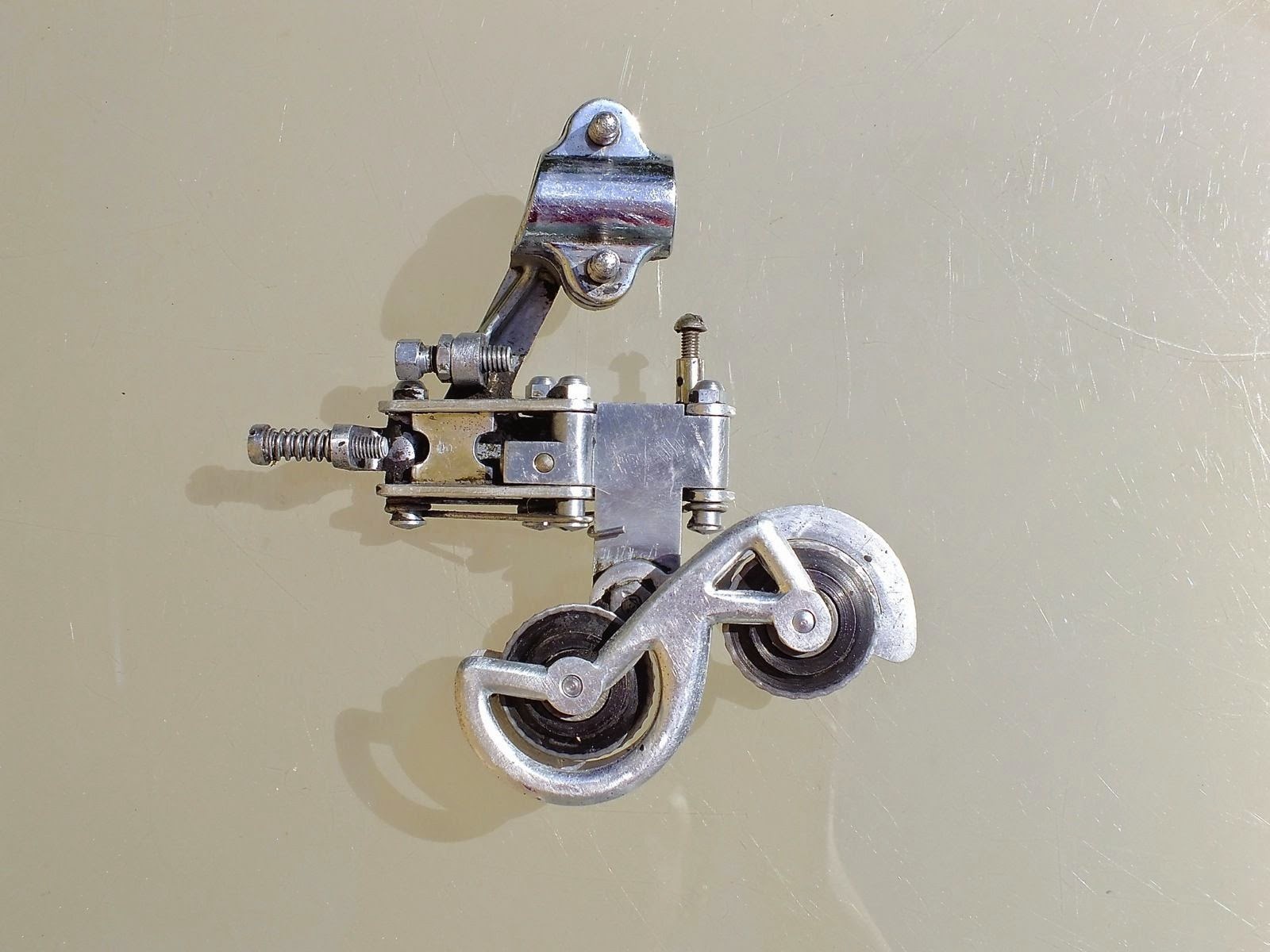 According to the Disraeli Gears site, the Cortina weighed a pretty respectable 266 grams, which was quite a bit less than the Campagnolo Gran Sport of the same time period (that was made of bronze, remember). No doubt, it shifted better, too.

There doesn't seem to be a lot of information out there about the Suwe Cortina. There is a picture of one in Frank Berto's book, The Dancing Chain, but barely any mention of it in any detail. Disraeli Gears has the most info that I could find, stating that the Suwe company was based in Vienna, Austria, and that their main line of business (at least, based on the many patents that they held) was apparently in ski bindings and other ski-related products. There is no evidence of the company's existence after about 1969.

I don't have $400 to plunk down on a rare but interesting derailleur, but I'll probably be keeping my eye on the auction in any case, just out of curiosity.
Posted by Brooks at 1:58 PM