Even as the bicycle industry is trying hard to convince us all that rim brakes are dark-ages technology, and that if you're not riding with disc brakes then god help you because you are a danger to yourself and all others around you, several component makers are hedging their bets with yet another new brake design that has no "backwards compatibility" and therefore would require the purchase of a whole new bicycle. Enter the "direct mount" dual-pivot rim brakes. 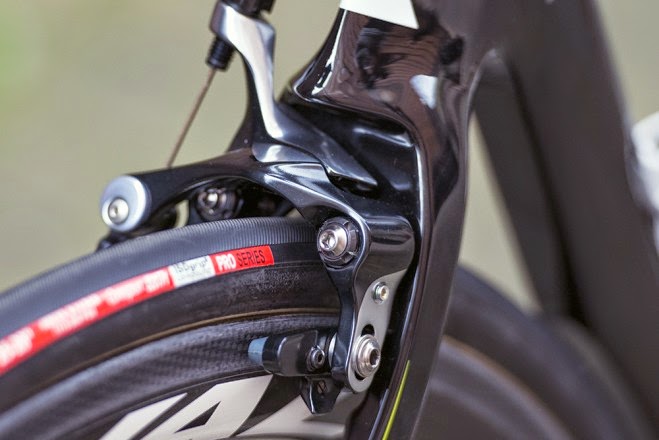 Now, of course, in a manner of speaking, many of the rim brakes in use today are essentially "direct mount," (I would include cantilever brakes, u-brakes, v-brakes, centerpulls mounted to brazed-on studs, and single-pivot sidepulls) but what makes the new crop of dual-pivot direct-mount brakes different is that instead of having a center-mounted bolt, and having one of the pivots mounted to some type of yoke, both pivots bolt directly to the frame or fork. Some of the advantages are supposed to be better brake feel and less flex, more balanced brake movement, better aerodynamics (since the brakes can fit closer to the fork or frame), and some claim more tire clearance, though the examples I've seen so far don't seem to bear that out. Shimano offers direct-mount versions of Dura-Ace and Ultegra brakes, which are being utilized on some models by Trek, and several other manufacturers are jumping on the bandwagon.

To my mind, there is both good and bad here, so this isn't just a full-out Retrogrouch Rant. The good is that these make some (at least modest) improvements to rim brakes, even as the industry is trying to convince us that rim brakes are no good. Go figure. Remember old-school centerpull brakes? Particularly the ones that mounted with a center bolt, then had a yoke with pivots at either end? Those brakes could get awfully "flexy" -- especially as the reach increased. But when mounted to brazed-on posts (as on some really nice touring or randonneuring bikes), those same centerpull brakes, even the long reach ones, can provide strong stopping power, good modulation, and lots of tire and fender clearance. Although mounting the pivots of a dual-pivot sidepull directly to the fork or frame should give a similar benefit, I'm betting that the difference in stiffness between these and a typical short-reach dual-pivot brake is harder to notice than the hypesters would have us believe. Now, if the long-reach sidepulls were done this way, a person might really notice a difference -- but I don't see any long-reach versions on the horizon.

So what am I grouching about? Compatibility -- or rather, lack thereof. Once again, we see a new change in technology that isn't compatible with anything else out there. They can only be installed on a frame designed specifically for them -- and I would guess that a frame designed for these direct-mount brakes would be incompatible with other types of brakes as well. One question I have is whether there is any standardization to the location of these pivots, or is it yet another proprietary spec? Being that one of the early offerings was from Shimano, it's always possible that their pivot boss spacing could become a de facto standard, but this is the bicycle industry we're talking about, so don't be too surprised to see different companies coming up with their own unique specs.

Another thing is the added complexity. From what I'm reading in reviews, some of the offerings so far are quite a bit harder to install than a typical single bolt mounted brake. I suppose that isn't a serious problem, but I haven't tried installing any yet.

With the arms fitting so much closer to the frame or fork, I've read that brake pad compatibility is also a potential issue. Unless the pads are specifically designed for these close-coupled direct-mount brakes, there can be some interference between the pads/shoes and the frame. It's always something.

I also have my doubts about the claims that these improve tire clearance. The latest direct mount brake from FSA, shown at Interbike, just about skims the top of a 23 mm tire. I've read some reviews praising the Shimano versions because they can easily fit a 28 mm tire -- maybe even as large as 30 mm, but I don't find the claim quite as impressive as some seem to think it. It only seems like a lot of clearance when compared with other short-reach dual-pivot brakes. I've seen lots of single-pivot sidepulls -- even short reach ones -- that could accommodate tires that large, or larger.

The new design from FSA bears a faint resemblance to the old Delta brakes from Campagnolo -- though far less pretty. Underneath their covers, however, they work on an entirely different mechanism. Whereas the Campys had a kind of deformable parallelogram linkage, the FSAs are basically a revival of the old rollercam brakes that were briefly all the rage on mountain bikes in the 1980s. Remember those? Usually mounted under the chainstays, they would get so choked up with mud that they'd quit working, and were finicky enough to quit working even when kept clean. The rollercams also required unique mounting bosses that rendered the frame incompatible with any other kind of brakes, and therefore completely obsolete when the rollercam fad faded away. I'd be concerned about the same thing happening all over again.

Like a lot of new technology, the latest direct-mount dual-pivot brakes might offer some small, incremental improvements, but with the usual trade-offs -- the most annoying of which would have to be the all-too-common problem of compatibility (and the potential for premature obsolescence). Don't expect to hear about the trade-offs in the hype, though. Nope -- all you need to know is that the bike you bought last year is from the stone-age. Time for another upgrade.
Posted by Brooks at 2:18 PM