At Eurobike last week, BMC unveiled a new "concept" bike. It's big news of course. Now, just like a concept car that might include futuristic styling and all kinds of "what if" ideas that may never see actual production, the BMC Impec is meant to showcase what their designers can dream up, and draw lots of attention to the brand as a leader in cutting-edge technology -- but cannot actually be ridden. It's the world's most expensive bicycle-shaped object (or BSO). Read the comments on the hype blogs, and find lots of people drooling over the thing, and hoping that some of its more futuristic features make it into production someday. On Road.cc one commenter was apparently even willing to trade his baby for the bike (I wonder how his wife would feel about that?). 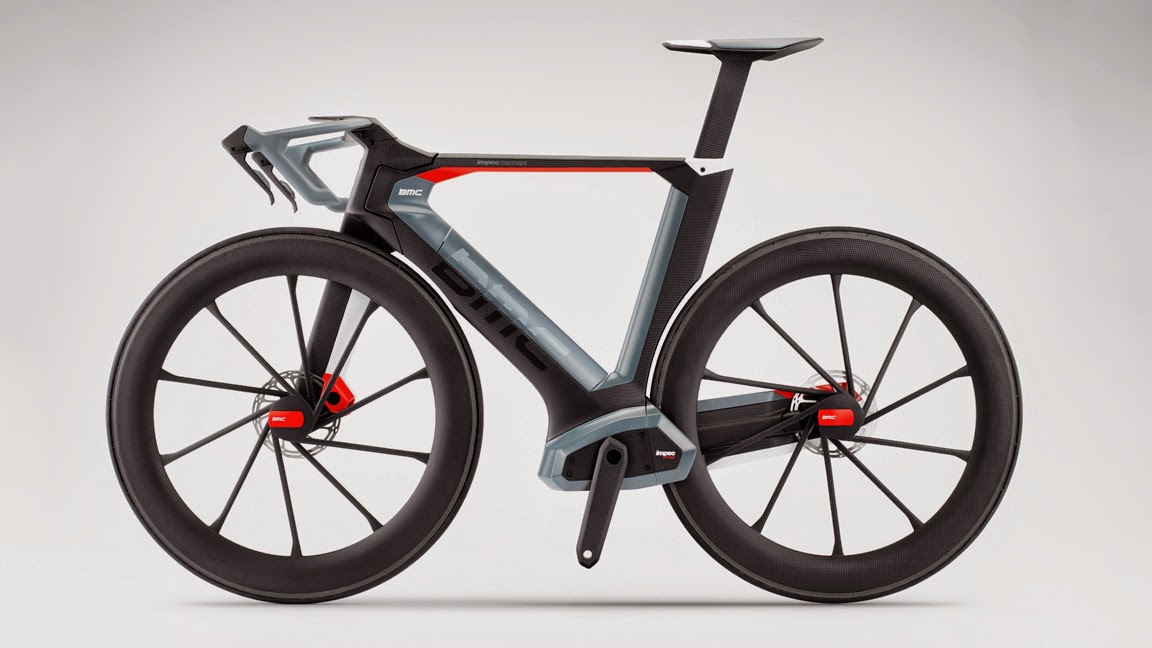 Featuring as much carbon as a coal mine, the BMC concept BSO has an aerodynamic frame with a massive single-sided fork (like Cannondale's Lefty, except that it appears to be a "Righty") and an equally massive single rear chain stay. An integrated bar/stem combo with built-in computer, a modular gearbox, and disc brakes (of course) on 10-spoke (count 'em - ten!) carbon wheels round out the package. I think it also evades radar, so there may be some potential military applications if the folks at BMC can actually make their stealth-fighter BSO work.

Go to the BMC Impec R&D Lab website, and find out more about the features, and some of the ideas behind the concept. Here's a quote:

"As a cyclist, you want a bike that represents you; your personality, your ride style, and your needs while out on the road. Is position on the bike your main priority? Maybe longer rides force you to become a combined mobile service station and food truck, with an extra tire, tube, pump, and enough food to feed an army? Or perhaps several hundred thousand kilometers ridden on a standard chain-driven machine has created a burning desire within for an entirely new ride experience? . . . We've come up with a structure that is highly modular yet enables the integration of external add-ons such as solutions for hydration, tools, etc. We've found other functions for existing structures such as turning the down tube and seat tube fairings into batteries. We looked at aerodynamics and functionality and broke the rules just how we like it -- exactly on our terms, with our people, at our R&D lab."

While it might be really "futuristic," I don't see too much in the concept BSO that would be as practical as the design team at BMC seems to think it would be. Take the modular add-ons. The frame has removable sections that can serve as hiding places (for tools, or a pump, for example) or be swapped out for completely different elements, such as a battery, or a water bottle. Or (more likely) they can just get loose and rattle any time the pavement takes a turn for the worse -- but that probably isn't a feature they want to highlight.

Not only that, but there is no way that little built-in cubbies and such will take the place of typical add-on saddlebags, etc., should one actually need to "become a combined mobile service station and food truck, with an extra tire, tube, pump, and enough food to feed an army." And good luck attaching them to this thing. Ditto, should you decide that your "ride style, and your needs while out on the road" also include fenders. 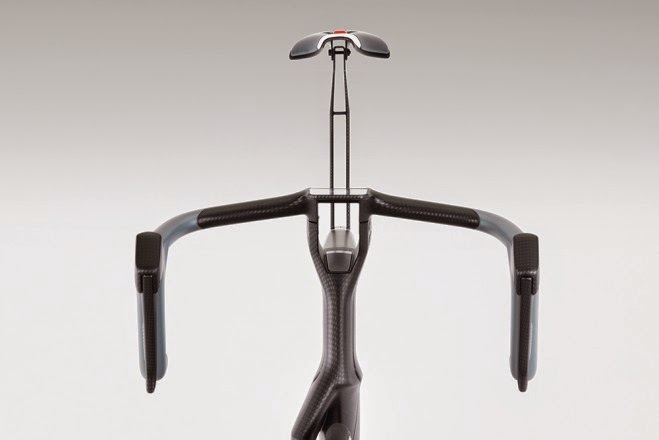 Well, what about the super-trick single-sided fork and rear stay? Those are drool-worthy, aren't they? Wouldn't it be great to see those work their way onto production bikes? The ultimate advantage of those elements is improved aerodynamics, and little else. But don't think they are without drawbacks. Consider how much larger in cross-section that single-sided fork has to be in order to be strong enough and stiff enough to resist all the various forces placed on it -- forces from steering, from braking (especially with a disc brake on one side), and the impact forces from the road. Making it out of carbon fiber probably keeps the resulting weight at least reasonable, but imagine what the ride would be like? A good fork should have a certain amount of compliance to improve ride and handling, but a single-sided fork like this won't have it. Same goes for the huge mono-stay at the rear. Wheel removal would be easy, but if that thing has any compliance at all, it's likely to result in some very unsettling handling.

Somebody out there is bound to point out that there are a number of motorcycles available today that have these features and they work fine. Single-sided swing arms have become really popular on high-performance and racing motorcycles -- one of the main advantages being simpler wheel changes in racing (the fact that it's now on lots of cycles that will never see a racetrack is because of the "cool" factor). But the swing arms have to be many times larger, and in many cases heavier, than their dual-sided counterparts. Then again, when you've got 100 horsepower or more at your disposal, a few extra pounds don't make any difference at all. In order to make something like that on a bicycle light enough to satisfy the weight weenies, what compromises have to be made?

Then there's the "modular gear box" that at least for now is empty. The idea is to be able to put in an internal gearbox "which means less drag and a lot less maintenance" except there is no such product currently available, so it's a big "what-if." And while its likely that a hypothetical internal gearbox would require less maintenance (apart from adding oil, there probably would be little that one would be able to do), how do they know it would mean "less drag"? It's an undisputed fact that internal gear hubs have more drag than derailleur gears, so why would such an arrangement have less drag when mounted in a crank case? I guess if you're "what-iffing" and coming up with imaginary super-efficient gearboxes of the future, why stop there? Why not have it make ice-cream, too? The other hypothetical possibility is that one would be able to swap out their miracle hypothetical low-drag internal-gear crank case for an electric motor. Oh, the future is looking so bright. Now if I can only figure out why it is that bicycle designers are so intent to turn bicycles into motorcycles or cars. Is it because so many of the designers come from the automotive industry? (BMC's design director, Torgny Fjeldskaar, previously worked at BMW and Mazda) Or do they just not like bicycles that much? 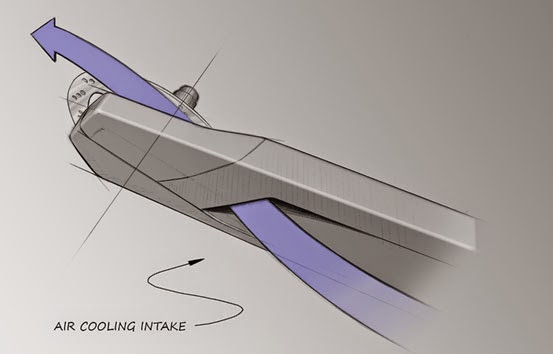 The most shocking thing I found in the description of the concept BSO was this section about the bike's disc brakes: "Disc brakes are a very real feature on the latest road bikes and nearly every major brand and component manufacturer are pursuing them. It's here, it's real, and it's improving every day. But, until now disc brakes for road use have been problematic; inconsistency in breaking (sic) performance and over-heating during prolonged use being the primary challenges. . . We have been focusing on frame solutions that address both aerodynamics and overheating."

What was that?! Disc brakes are problematic? They are not the perfect "no-downsides whatsoever" solution for braking (breaking??) that we are constantly expected to believe by the hype machine? What industry do these guys work for, anyhow? I'm absolutely shocked to see an admission that disc brakes can overheat. Then again, I don't think covering them with what amounts to a massive carbon fiber fairing with an air passage for cooling is likely to help as much as promised. Good thing I'm no engineer.

Okay -- I know I'm probably being overly critical of an unride-able concept machine that isn't even meant to represent real-world production bikes. But if the concept BSO is supposed to represent where people envision bicycle design to be heading, with ideas that might work their way into actual production, I can only say that I don't see it as the improvement some would have us believe. Once again, creating real improvements to the bicycle is a lot harder than people think.
Posted by Brooks at 11:46 AM