Give 'Em a Good Shellacking

Some years back, I was at the Classic Rendezvous Cirque du Cyclisme -- a classic and vintage bicycle show and gathering. Part of the annual event includes a bike ride which turns out to be a great opportunity to see some classic bikes out on the road with like-minded enthusiasts.

As I was waiting at the gathering area for the ride to begin, looking around at some really nice vintage bikes, somebody approached me from behind.

"Really nice job on that bar wrap," the person said.

I turned around to find none other than framebuilding master Richard Sachs standing beside me.

Not to overstate my feelings about his vote of approval, but to my mind, it was something akin to being some random guy playing guitar on a street corner for tips, and Eric Clapton walks up and says, "Hey man, nice chops!" While I'm sure Richard has no memory of our meeting or that brief exchange, it pretty much made my day.

I've been using the cloth tape and shellac method for finishing bars for about 13 years now -- the first bike I finished this way was my Curt Goodrich-built Rivendell, from about 2001. Since then, I've finished the bars on a bunch of bikes (for myself, and for others) with cotton tape and shellac. I love the way it looks, and feels, and it lasts a long time. Like a lot of people doing their bars this way, I got started because of articles by Grant Petersen with Rivendell Bicycles -- articles that would have appeared in the Rivendell Reader and catalogs. It's an old method that goes back to cyclotourists of the golden age, later forgotten by many but a few old-timers, but it's seen a resurgence in popularity in recent decades.

There are plenty of articles online and even some videos on YouTube that show step-by-step how to wrap and shellac bars, so I won't go into that kind of instructive detail here (and besides, I don't think it's all that complicated). But I will give some tips and recommendations.

For tape, the traditional choice has long been the Velox Tressostar cloth tape. It has an adhesive backing, a good weave that resists fraying, and comes in a variety of basic, classic colors. A more recent choice is Newbaum's, made in the U.S.A. and it is very good. It is slightly thicker than Tressostar, and each roll is a bit longer which means you can wrap even really wide bars with confidence that you won't run out before the bars are finished. Newbaum's also comes in some more interesting colors -- though personally, I rarely use any colors besides black, yellow, or brown. Velo-Orange recently came out with another choice they call "Comfy Cotton Tape." It is wider and much thicker than the other choices, but available only in black, white, and primary colors (red, blue, and yellow). I recently tried it, and it is nice, though I did find that the particular weave is more prone to fraying than the Tressostar or Newbaum's. That isn't much of a problem once the tape is installed and shellacked, but it is something to be aware of when wrapping. There is also Viva brand tape from Japan -- high quality and some interesting colors, but a little harder to find.

Finishing the ends. I swear, this almost takes on the importance of a religious discussion. Start at the ends and work your way up to the middle? Start at the top and work your way down? Start at the end AND the middle and work towards the brake levers? It's not life or death, and people have their preferences. As for me, I almost always start at the ends of the bars and wrap up to the top -- that way, the tape overlaps in such a way that it's almost like roof shingles, and hand pressure won't roll the edges back (of course, sealing the tape in shellac prevents that anyhow). At the top of the bars, I wrap the ends of the tape tightly with some hemp twine (usually) which is a little "coarse" and has a natural look to it that I like. The twine will also get sealed with shellac so it won't unwind. I have, on occasion, used embroidery floss which comes in a vast array of colors and shades -- if I wanted to do something a bit different with color (but I rarely do). The method of starting at the end and the center of the bars and working towards the brake levers does work well. Proponents like to point out that the ends of the tape get tucked neatly under the brake lever hoods, so no twine or other method is needed to secure the ends, and wrapping around the levers is somewhat simpler. I've done it this way -- but I'm happy enough with my usual method.

For bar ends, I like the old-style Velox rubber ends, but I have on occasion used wine corks to good effect. Because the corks don't usually cover the end of the bar tubing completely (they fit into the bar, but don't quite "cap" it) I'll wrap a bit of twine around the corks to finish them off. 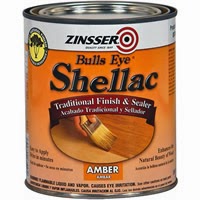 When it comes to shellac, a person can buy pre-mixed prepared shellac in a can from just about any hardware or paint store -- typically in "clear" and "amber" choices. That works fine, but I've found that, unless you wrap bars all the time, there is much more shellac in even the smaller cans than a person can typically use before it goes bad, which means waste. Over time, the shellac will absorb moisture from the air -- even in a closed can (a half-empty can will be half-full of air!). The remaining shellac, if used, will not dry well -- it remains tacky, at which point one would have been better off just leaving the tape plain and unshellacked. 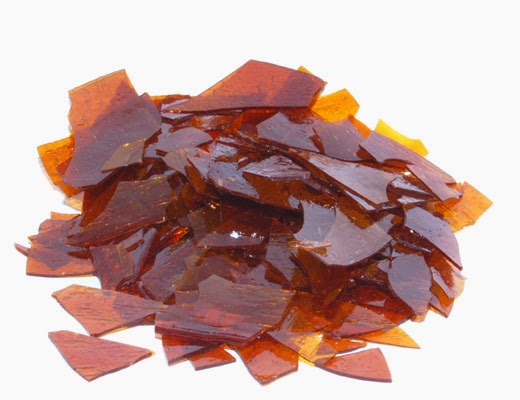 Another way to go is to get shellac flakes and mix your own. The flakes come in more varieties of color, from "blonde" to "amber" to "garnet," and can be dissolved in denatured alcohol. These can be a little harder to find, as a lot of hardware and paint stores may not carry the flakes normally, but there are lots of online sources. If the flakes are in big chunks or pieces, it can be really helpful to grind them up to dissolve more easily. Some people use an old coffee grinder, though I've used a mortar and pestle to good effect. The benefit of mixing your own is that you can make a smaller amount -- just what you need -- and have less waste. Also, when I mix my own, I tend to mix it a little "thinner" than the canned variety, my thought being more coats with thinner shellac for more "control" of the shade and color.

Speaking of color, applying any shade or color of shellac over bar tape will affect the tape's color somewhat. Even "clear" shellac over white tape will still cause the tape to yellow -- and the more coats, the more coloring. Knowing exactly how tape color will change can involve some guesswork, and it's not likely that many people want to buy a bunch of tape to experiment. However, there are sources online that have pictures posted of different colors of bar tape with and without shellac that might serve as a guide. Here are a couple combinations that I know well: Yellow or white tape with amber shellac will take on the color of a honey-colored Brooks saddle (I think the yellow works slightly better in that regard). Brown tape with a few coats of clear shellac will nicely match an antique brown Brooks saddle. Red tape with garnet shellac will take on an oxblood kind of color. With black tape, I only use clear shellac, and usually no more than two coats (or three if they're thin) to preserve the black shade.

How many coats? The first coat of shellac over cotton tape will usually soak right into the tape (especially if you mix it fairly thin) and it can be hard to tell the bars have been shellacked at all. A second coat will give the tape a good "seal" but will usually leave a fairly rough or "grippy" texture that some people really like. Three or four coats will leave the tape pretty smooth and with a shine. After a few rides, it will have a nice, matte or satin look that almost resembles leather. Some people don't like it when it gets the smooth "shiny" look, believing it to be slippery. I haven't found that to be a problem myself but your mileage may vary.

For applying shellac, my preference is towards cheap natural-bristle brushes -- usually about 1-in. to 1-1/2-inches wide. I've seen some bloggers suggest using foam brushes, but personally I hate those. When coating the bars, I recommend rolling the brake lever hoods back so they don't get coated (or stuck!) in the shellac. I also recommend wrapping an old towel around the top tube, head tube, and front fork in case of drips. Yes, drips can be cleaned up easily enough with a bit of denatured alcohol on a rag -- but I figure it's better not to have to clean them up at all.

Although I've only done basic one-color wraps on my own bikes, I've seen where people have mixed colors in a weave, which usually creates an interesting kind of multi-colored diamond pattern. Search the topic on Google and find all kinds of examples -- even detailed step-by-step instructions. Weaves usually require more tape than a more traditional wrap, and it takes a bit of practice to get it just right. The weave patterns are pretty cool, but maybe just a bit too much for my taste (that's not a criticism of those who like it!) so I've never tried it on my own bikes. For a seriously frou-frou look, I've even seen where people would weave 2 or 3 colors with a diamond pattern, then criss-cross twine over the diamonds, resulting in something that looks like argyle! Obviously, when it comes to bar wrap, one is only limited by their imagination and taste level.
Posted by Brooks at 12:41 PM