The UCI, the organization which regulates professional bicycle racing, has finally "embraced" disc brakes on racing bikes -- which just might be the beginning of the end for rim brakes. It probably won't happen overnight, but now that the pros are switching over, the industry marketing machine will go into overdrive to make sure everyone makes the switch. 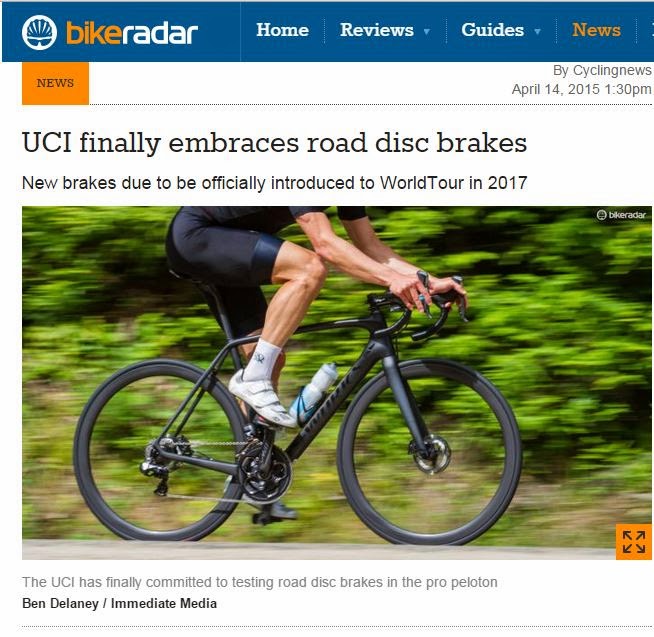 The UCI decision will introduce disc-brakes on a trial basis later this year as "all teams will have the opportunity to use bikes with disc brakes at two events of their choice during August and September." The testing period will continue through the 2016 racing season, and then the brakes will be introduced officially in 2017. According to the UCI announcement, "The aim is to eventually introduce disc brakes to all levels of road cycling."

Like I said, it's only a matter of time.

What I find hard to swallow in all the discussions about disc brakes, road bikes, and racing, are all the various claims being made. Take this claim from UCI President Brian Cookson: "This step is part of the UCI's desire to encourage innovation in order to ensure cycling is even more attractive for spectators, riders, bike users and broadcasters."

How exactly does this make cycling "more attractive" for spectators, or bike users? Does anybody watch bike racing and find themselves wishing that the bikes had disc brakes? Are there people out there who think, "I'd love to watch bike racing, but not until they start using disc brakes"?

As for "bike users," they've been able to get bikes with disc brakes for years now. Other than providing some kind of meaningless "validation" to their braking choice, what difference does it make if the pros used them or not? 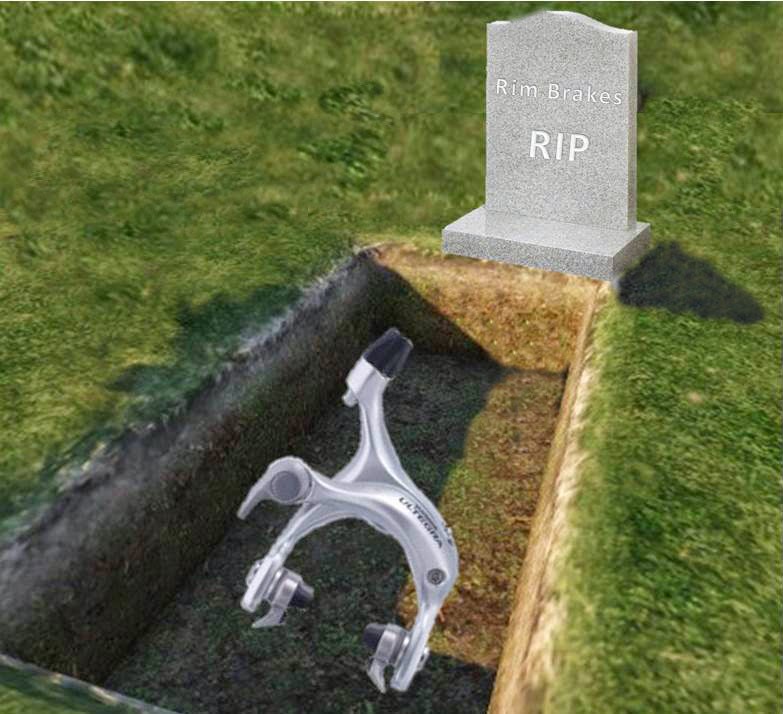 The benefit for broadcasters is obvious. Everyone will "need" a new bike, which means more ads for the "new" and "superior" disc brakes, and the bikes equipped with them.

Of course, nobody benefits from the decision more than the makers of bikes and components. And the World Federation of the Sporting Goods Industry (WFSGI) was on hand when the UCI announcement was made earlier this month. "This decision will further develop innovation and create new possibilities for the bicycle industry as well as additional performance for the riders."

Look at some of those claims. Additional performance for the riders. Really? Apart from anecdotal evidence, I have yet to see anything that convinces me that disc brakes are remarkably better than rim brakes (which, functionally speaking, are disc brakes too). Performance in the rain is somewhat better. And one can apparently reach maximum braking with less lever effort. But the lever effort on modern rim brakes is pretty light, and the modulation is great. If the only experience one has with rim brakes is of the crummy old stamped steel calipers on steel rims of old low-budget bikes, then discs would have to look pretty amazing. Modern brakes, even some of the cheaper ones, work remarkably well. The only downsides to them are that they're light, simple, and effective.

There are other drawbacks to discs that don't get mentioned much. The components are downsized so much in an effort to reduce the weight, that overheating becomes an issue. People sometimes talk about rim brakes getting so hot on a long descent that tires could burst. That is true, but with hydraulic systems, the same scenario can result in the brake fluid boiling, leaving the user with no brakes at all. Too much heat can also warp the discs. It happens on cars with their massively thick vented brake rotors -- how can anyone argue that it doesn't happen on bikes with their tiny 1/8" (or less) thick discs?

Another issue, one that barely gets mentioned, is that disc brakes put tremendous forces on a fork at the ends where the fork is weakest, instead of near the crown where it is strongest. What this means is that the fork needs to be "beefed up" for disc brakes, making it less flexible, which in turn affects the comfort of a bike.

In the debates over disc brakes in pro racing, a claim I have heard more than a few times dealt with the danger over mixing disc and rim brakes in the same peloton. People would say that if some riders used discs while other used rim brakes, it would lead to a dangerous situation in the mountains and in the rain. Any time I've seen independent tests of brake performance, there is so little difference between rim and disc brakes that I'm convinced the concern is overblown. It makes good marketing, though.

The real issue with rim brakes in pro racing is not the brakes, but the rims. So many racers are switching (or have switched) over to carbon rims instead of aluminum -- and the braking on those, especially in the wet, is known to be lousy. It's no secret, considering that the carbon rim makers tout their best rims as having braking performance that rivals that of aluminum. That right there is probably the biggest reason for the push to disc brakes.

For most people, and in most conditions, it makes little difference.

If I were buying a new bike and it came with disc brakes, it wouldn't be a deal-killer. But nobody should get the idea that rim brakes are inferior, or necessarily obsolete. Given the simplicity of rim brakes, their solid reliability, and the versatility of having widespread brake-pad compatibility, I see no reason to make a switch. How much longer will I have the choice?
Posted by Brooks at 9:16 AM