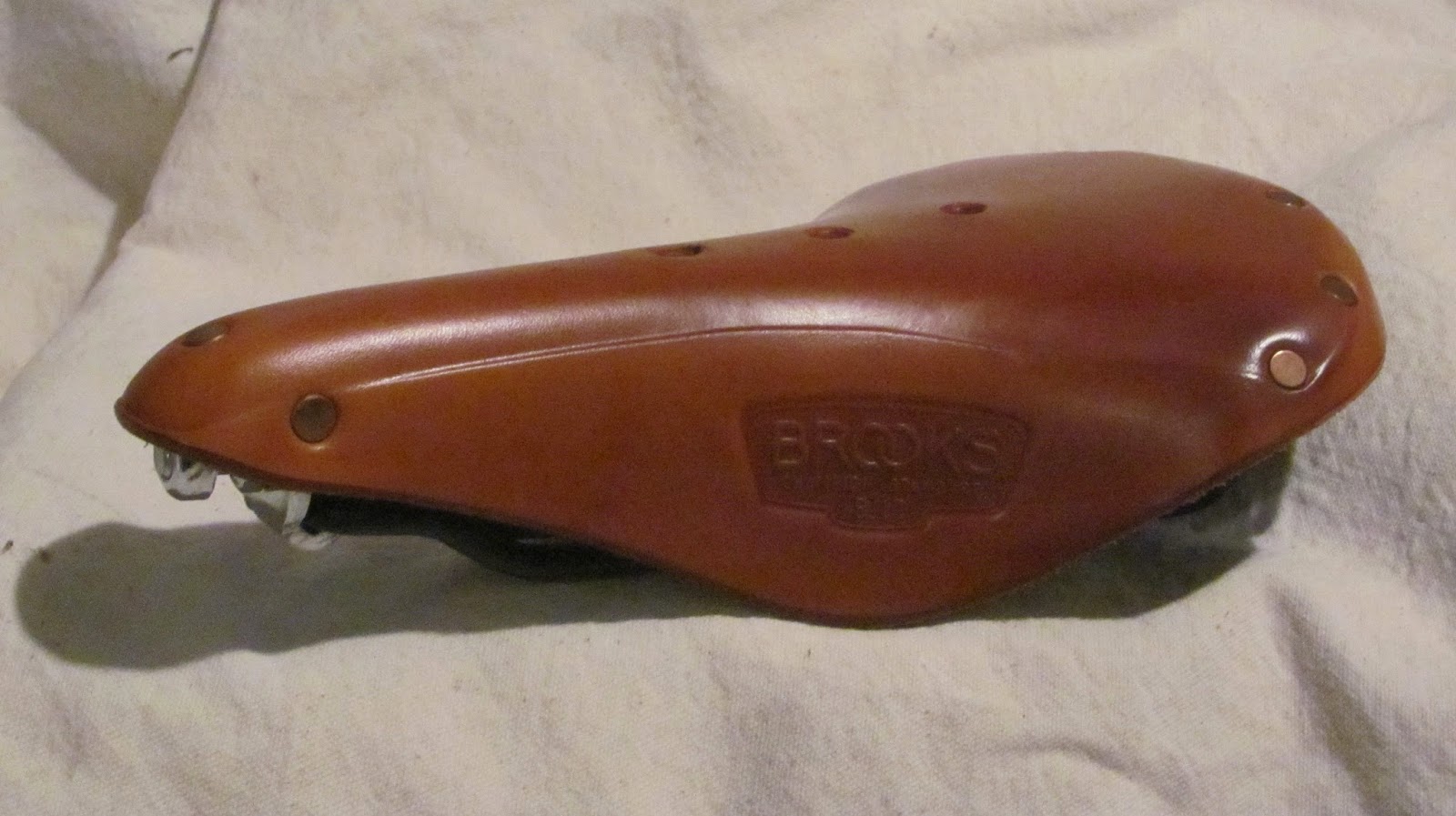 I just got a new old saddle for an upcoming project for which I'm currently gathering parts. It's a honey-colored Brooks B17 Standard, which is probably my favorite all-around saddle. Prices for new B17s are around $120 - $130 nowadays.  (The first one I ever bought was probably little more than half that). The "Special" version, which has a skivved lower edge and larger, finished copper rivets, sells for around $180. Watching eBay auctions, I've found that good used B17 Standards sell for anywhere from $50 - $100, depending on how "broken-in" they are (Specials can go for a little more, obviously). This one has a slight mark on one of the rails that says it was once mounted to a bike, but otherwise it shows no sign of having ever supported anyone else's butt. No Proofide has been applied to it, either, so I didn't feel too bad paying an even $100 for it. It's basically new.

Something I noticed about the saddle, when looking closely at it, was that it had to be in the neighborhood of 15 years old or more, despite being basically unused. Looking at the name badge on the back of the saddle, I noticed it has an older style brass badge with the words "Brooks England" on it, which was probably last used around the time that internal-gear hub maker Sturmey Archer still owned Brooks. The first B17 I ever purchased was made during that period and has the identical name badge. The Raleigh/Sturmey Archer/Brooks conglomerate went bankrupt in 1999, and Brooks was rescued by some investors who kept it going for a couple years before selling the company off to the Italian saddle maker Selle Royal in 2002. Selle Royal changed the name badges to an embossed design that itself recalls an even earlier design from the 1930s. The saddles are still made in England, but the current badge no longer says so.

That got me wondering exactly how old the saddle is. There was a time when Brooks would stamp a number code into the cantle plate (that's the steel plate at the back of the saddle where the rivets attach) which would indicate the year the saddle was made, but they seem to have stopped doing that. My oldest Brooks saddle is marked "72" and is mounted onto a very nice 1973 Mercian. Nowadays, there is an alphanumerical code stamped into the leather. I've read different explanations (or attempts at explanation) to decipher the code, but I've seen codes on some Brooks saddles that didn't seem to conform to any logical system. That would make sense, since I have read that for a time, the codes on the leather were "batch" codes, but didn't necessarily represent a manufacturing date. However, in more recent years at least, the letter is supposed to represent a month of manufacture, while the numbers indicate the year. My new old saddle is marked "9E9." If the E is a month, then it must represent May (5th letter, 5th month), and the year is probably '99. So this saddle would have been made not long before the company was put into receivership. 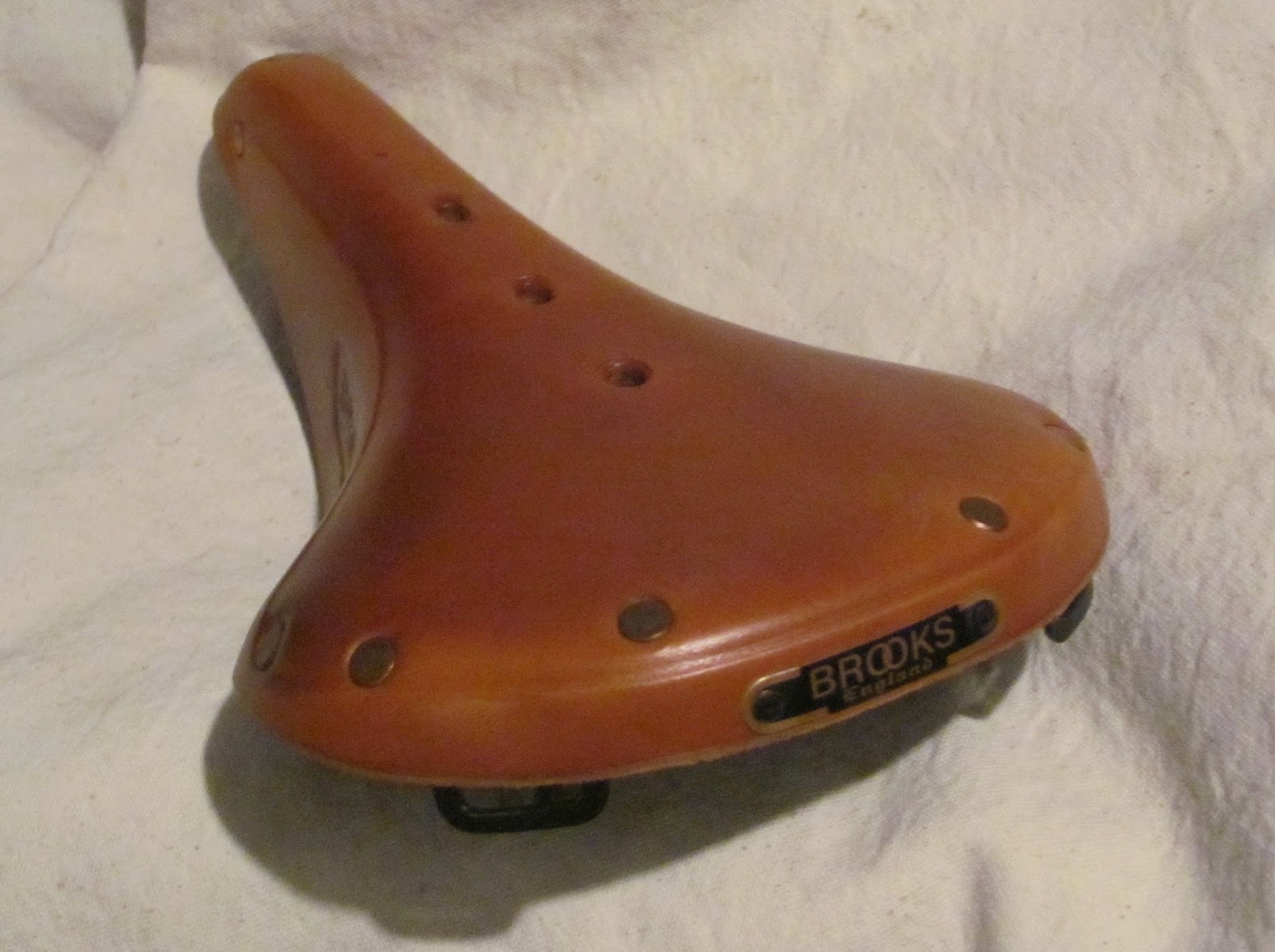 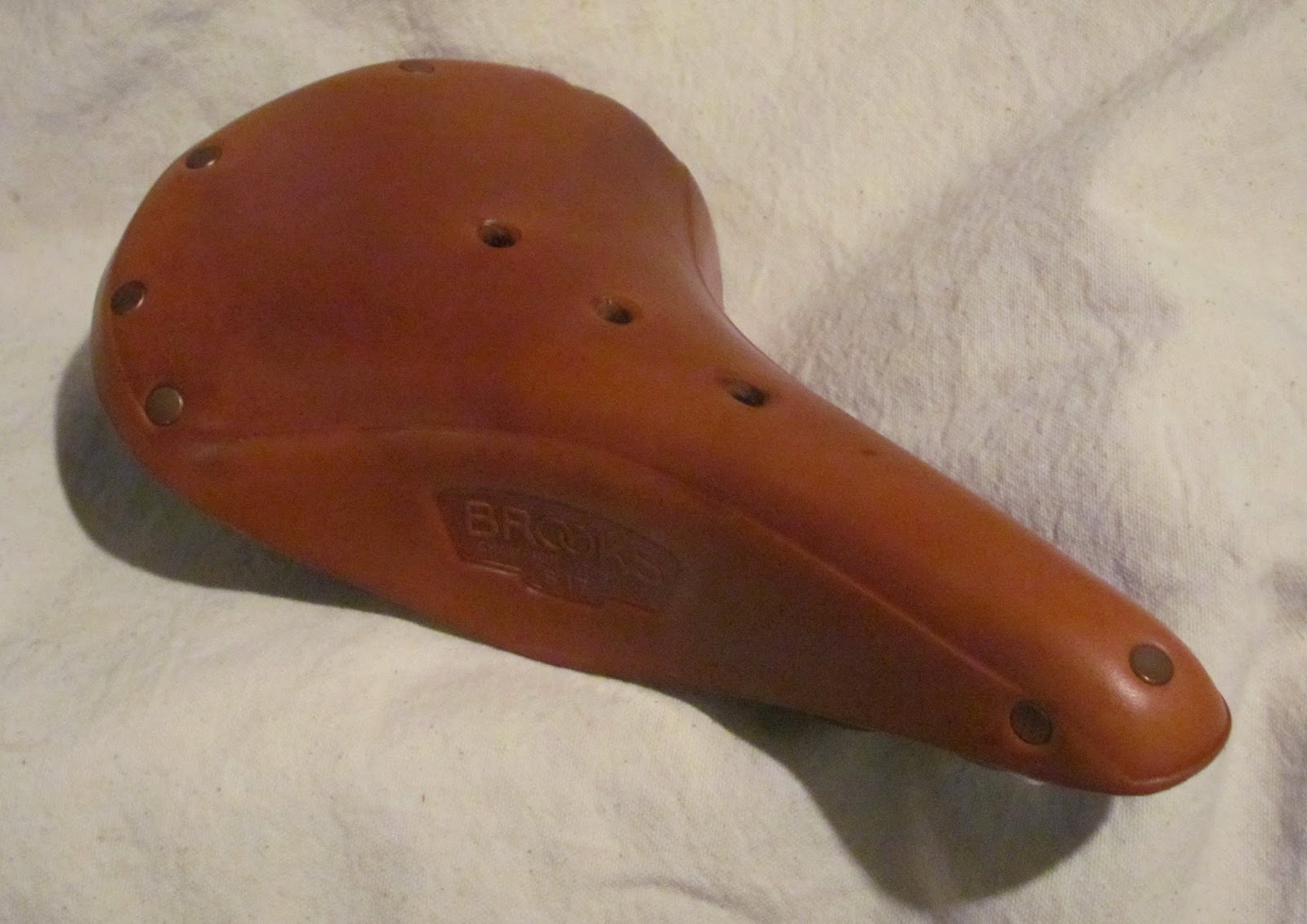 And here's what it will look like after about 15 years and I-don't-know-how-many miles:

If readers want to know more about dating their Brooks saddles, or to see some of the changes in the name badges, there is the aforementioned article on the Vintage Trek website, and a useful reference on The Headbadge website. Both are worth checking out.

Some might be wondering about the project I'm working on that I mentioned at the start of this. More will be coming out in bits and pieces in the coming weeks. Stay tuned!
Posted by Brooks at 10:58 AM