Remember when it seemed like everyone wanted a "fixie"? (or at least, dedicated followers of fashion!) Of course, brakeless track bikes were the ultimate fixie ride for urban hipsters, but that didn't stop many many more from taking regular old vintage road bikes and converting them to fixies. At the height of the fad - what, 6 or 7 years ago? maybe more? - just think about how many classic old road bikes underwent the fixie conversion -- some with truly regrettable results. I suppose the fad saved a few classics from otherwise ending up in landfills, but there was always something vaguely unholy about slapping an aerospoke front wheel and sawed-off straight bars onto a vintage Colnago.

Of course, the fixie fad started to decline, and I'm sure part of it had something to do with the fact that people figured out that multiple gear ratios and derailleurs were invented for a reason. But what to do with all those old fixed gear bikes after their owners realized that being able to change gears (and coast once in a while) is a really nice thing? 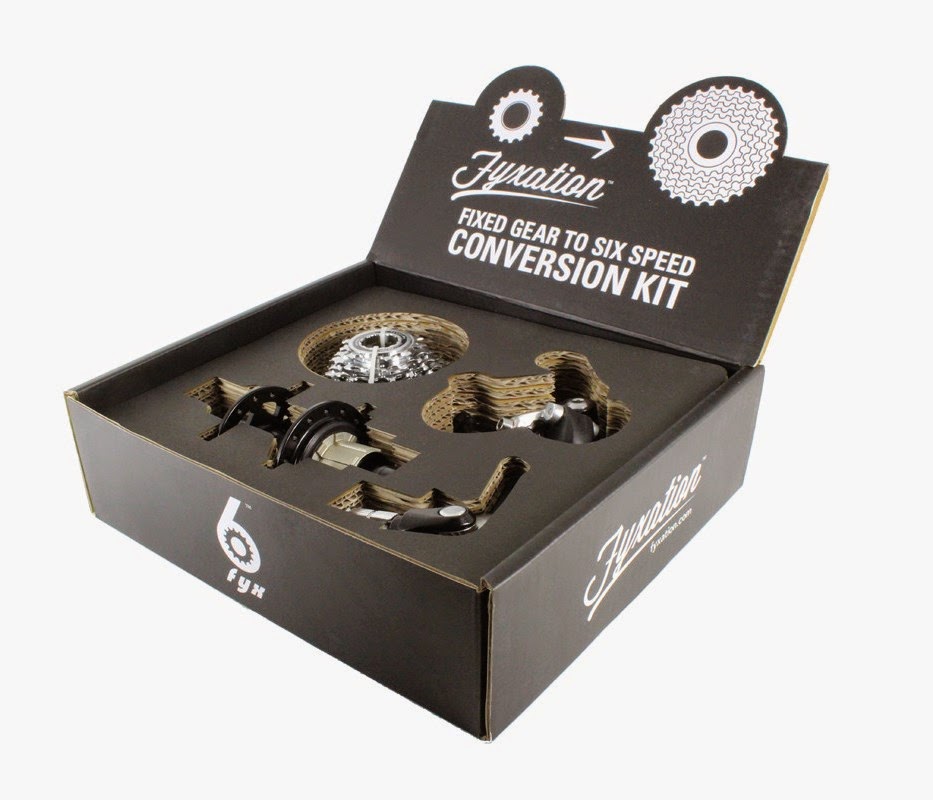 Well, the folks at Fyxation, from Milwaukee, have the answer: the Six Fyx Conversion Kit -- which turns a single-speed fixed-gear bike into a 6-speed derailleur bike.

The Fyxation kit includes a 120mm wide cassette hub, a 6-speed cassette, shift cables, and a Fyxation-labled Microshift derailleur and bar-end shift lever. There is also a derailleur hanger that works with bolt-on axles, and a 46 tooth chainring. The regular kit sells for $250. For those who don't want to build a new back wheel, a $300 version of the kit has a complete back wheel built with the Six Fyx hub. A 9-speed chain is needed, but not included.

I'd suggest making sure one can add brakes to their bike as well, but then, I've always believed any bike ridden on the street, fixed-gear or otherwise, should include brakes.

It's so nice when things come around full circle. Before, people were turning old road bikes into fixies. Now they'll be turning old fixies into multi-speed road bikes. I'm I alone in seeing irony here?
Posted by Brooks at 6:51 PM