Much has been written, and many curses uttered, about creaking press-fit bottom brackets on expensive state-of-the-art bicycles. Here on this blog, I take an almost perverse glee in the problem. Just last month I wrote about a couple of new entries to the bottom bracket market that were supposed to silence the issue -- the BBInfinite, and the Enduro TorqTite.

Now there's another new solution that has its makers so bold and so certain of success that they promise it to be 100% Guaranteed Zero-Creak, and it comes from a company called . . . (wait for it) . . . Legit Engineering. What seems somewhat less than "legit," however, is the fact that it's impossible to find a website or any other info about the Taiwanese company. In fact, it might just be impossible to purchase one here in the U.S.

Nevertheless, Legit has a solution, and other writers are calling it "ingenious."

What's so ingenious about it? 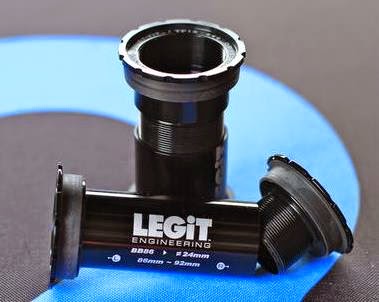 It's a threaded bottom bracket that fits into a press-fit shell. The two halves thread together in the middle, while the flanges tightly sandwich the frame between themselves, locking it together to eliminate creak-causing movement.

Actually, the Enduro TorqTite is also a threaded bottom bracket solution -- but the Legit unit also incorporates compressible nylon rings at the flanges that are supposed to make up for any possible variables between the BB unit and the frame, and serve as a buffer to further silence the problem.

I find it hilarious that the solution for these problematic press-fit bottom brackets is to install threaded bottom brackets -- even as the industry keeps telling people that their mind-boggling myriad of press-fit BBs are so much better than the old-tech.

The next and final solution to press-fit bottom bracket woes will be a fully threaded bottom bracket unit that is tightened into matching threads cut into the frame's BB shell. Carbon frames will have an aluminum shell bonded into place, with precisely machined faces, with threads cut into it. The industry will declare it "revolutionary" and treat it like something brand new. Somebody will come up with a catchy new name for it. ThreadTech™  or something similar.

Not only that, but aftermarket companies will offer products to properly and permanently convert current press-fit BB frames to the new threaded system (and I should probably patent it right now, and I'll be able to retire early)

Here's how it will work:

A machined and internally-threaded aluminum sleeve is pressed into the bottom bracket shell with a headset press. Instead of loctite, it will be coated in permanent "aerospace bonding adhesive." Don't worry about removing it later -- why would you want to remove it? It's a permanent fix. Once the threaded sleeve is bonded in place, a proper threaded bottom bracket (sorry, ThreadTech™) can be installed. It's just like what should have been done right from the start.