Are You A Snob?

I took a goofy "self-assessment" quiz on BikeRadar the other day -- Are You A Cycling Snob? I found it deeply flawed, but readers might be interested in checking it out. 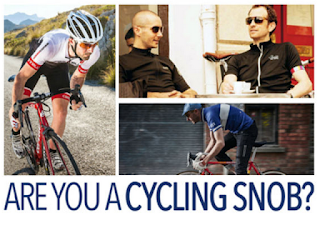 I actually had a hard time answering some of the questions because many of the possible answers were so ridiculous - and the "right" answer (at least for me) often wasn't among the options.

Here are some of the questions - and my responses:

Have you ever used the term chapeau in a non-ironic way?

OK - I'm trying to remember if I've ever used the word "chapeau" at all (other than just now). Being that my command of the French language is pitiful, I've never been tempted to substitute "chapeau" for "hat" or "cap." But more importantly - other than French people, WHO THE HELL DOES THIS?

Strava is . . .
The perfect opportunity to look down on others
A place to follow friends' achievements
Somewhere to log my ride data

What if my answer is "None of the Above"? Where was that option? Has Strava become so widespread that the editors couldn't conceive of anybody not using it? Or have I gotten so backward by avoiding it that I've ceased to exist?

There is no option for "No." But I know what chamois cream is. I just don't bother with it. As retro-grouchy as I am, I generally don't bother with shorts that contain "real" chamois - and I've never been a fan of slathering my backside (or the garments that cover it) in goop.

How many cycling caps do you own?
I have a wide selection of caps, color matched to my various outfits
I wouldn't be caught dead in one
I have one or two, mostly to keep the sun out of my eyes

At least they're not calling them "chapeaus." I have a few - mostly for nostalgia. They don't match my outfits, and the brims are usually too short to do much about sun. The best reason I will wear one is to cover "sweaty helmet hair" if I have to get off the bike during a ride - to go into a shop or a restaurant, for instance. With no options to fit my answer, I figured the 3rd one came the closest.

Does your sock choice vary based on your kit selection?
I buy my socks together with the kit
Only to suit the weather
No, whatever is handy

How about "No, because that's stupid"? I had to go with "Only to suit the weather" because it seemed like the most practical answer. Cold weather, warm socks. Beyond that, they should be white.

I shave my legs because. . .
Why would I bother shaving my legs?
It's more aero, isn't it?
It's pro

Sunglasses should be . . .
Protective against UV rays
Cycling specific
Oakleys

Give me option number 1, please.

Your stem position is. . .
Where the bike shop put it
Slammed, always
The best position biomechanically

Is "The best position biomechanically" the same thing as "Where it feels best for the kind of riding I'm doing"?

Leaders' jerseys and world championship stripes are . . .
For Grand Tour leaders and World Champions only
For avid race fans watching TV
For wearing on club runs

Why is there no option for "Pretentious"?

I had to go with "finely crafted machines," though "works of art" can describe some of them.

Gran Fondos and sportives are for. . .
Racing with your friends
Winning
Sharing the road with fellow cyclists

I went with the last option, but I wanted an option to say "I don't do Gran Fondos."

You carry your drink in. . .
A bidon
A ring-pull can
A water bottle

Who drinks out of a ring-pull can on a bike ride? If we're talking about beer, it gets ruined on a bike ride. And unless your name is Jacques, you shouldn't be drinking out of anything other than a water bottle.

Pro kit is. . .
As pretentious as it comes
For looking like a pro
Cheap at the end of the season

This isn't really much different from the World Champion jersey question - but at least this time "pretentious" is one of the options.

Ummm . . . I'll take water, thanks. The "Hand picked, heritage coffee" answer is maybe a pretty good indicator of where bicycling is headed - or at least, in danger of heading - in this world where the cheerleading magazines call $9000 bikes "bargains."

What is your favorite frame material
Carbon
Titanium
Alloy
Steel

That was the easiest question for me. Obviously I chose Carbon. Oops!

At the end of the test, I was given the following assessment:

Anti-Snob. You have a strong love of cycling but you hate the pretentious crowds with their caps and pulled-up socks -- you'd rather be out on your bike than sipping espressos.

You can take the test HERE, and if you do, come on back here and leave a comment to share your result.
Posted by Brooks at 12:41 PM