About a week ago, I posted about an old advertisement for Lambert Bicycles from 1973 which featured the following photo: 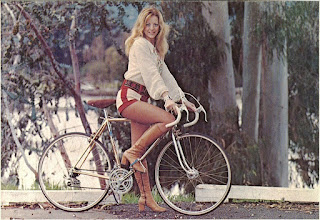 A reader pointed out the irony of my waxing nostalgic about the ad with its sexy model on the same day that much of the bicycling blogosphere was foaming at the mouth over some free socks that were given out in the swag bags at this year's Interbike trade show. Quickly dubbed "Sockgate," (why do ALL scandals since Watergate have to end in "gate"? Can't somebody get creative?) the giveaway socks renewed accusations of sexism in the bicycle industry -- even as they claim to be trying to appeal more to women cyclists. To be honest, until the reader mentioned it, I hadn't yet heard about the sock scandal.

Needless to say, it got me wondering if appreciating a 40 year old advertisement puts me in the same league as the doofuses who thought those socks would be appreciated by all attendees at Interbike. I will mention that even though I like the old Lambert ad (and lots of other old ads like it), I wouldn't be caught dead in those ridiculous socks -- even if they were free. Still - it's something to think about.

Of course, women have been used in bicycle ads (the word "used" suddenly seems more significant) almost from the beginning. Who can forget this old poster, and the many, many more like it from the turn of the century? 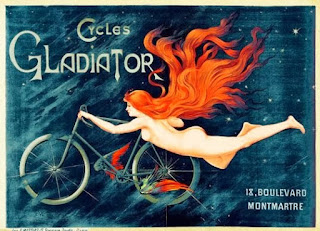 And the images of women appear in all kinds of bicycle ads throughout the century -- and in a lot of favorites from the Bike Boom of the '70s, including the Lambert ad shown above, or this similar Crescent ad from about the same time: 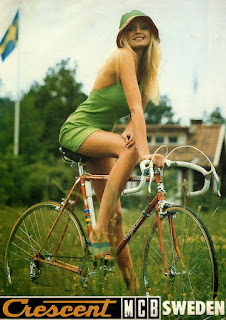 But now the question I ask is, is it the same? Or is there a difference? Is appreciating images in these vintage ads from earlier eras, when things were different, the same as giving out those tacky socks?

Sex is obviously still used in bicycle ads today, but somehow to me it feels different than in those older ads. More crass. And there's a sense that maybe people should know better by now. As a great example of this, do a quick search for Stradali Bicycles, and find tons of images like this one below:

Even though I like some of the old vintage ads, the newer ads shown here seem worse to me somehow -- and more pointless.

I'm not a woman. But I am a man who tries to be sensitive to the way women think and feel. So, back to my question. Are those tacky socks, or those Stradali ads, et. al. in the same league as the old vintage ads I call attention to so often? Or are they different? I don't really know how many women read The Retrogrouch, but I sure as hell wouldn't want to alienate any of them. Getting some comments from readers on the topic would worthwhile. Any thoughts?
Posted by Brooks at 5:25 PM