In the recent post about this blog's 2nd anniversary, I mentioned the head badge collage that makes up the blog's background "wallpaper" image. Here it is: 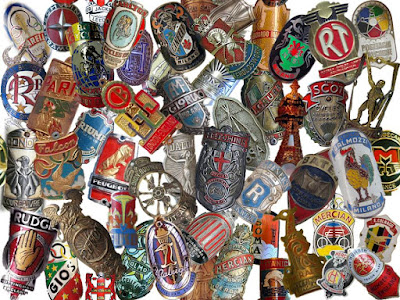 I suppose that a photo editing program like Photoshop would be a good choice for a project like this, but to be honest, I've never really gotten the hang of Photoshop, and it isn't necessarily a program that a lot of people would have unless they had a specific need for it. But Microsoft PowerPoint, which comes as part of MS Office, is a pretty common program, is easy to use, and has some capabilities that casual users might not be aware of.

My screenshot images below mostly come from the Mac version of PowerPoint, though I've used both Mac and PC versions. They look a little different - slightly different layout, etc. - but most of the basic commands and tools are the same (even if you might find them in a different part of the screen).

Step One - Insert a Photo:

You can take photos yourself, or download them off the internet. In this case with the head badges, a general Google search can turn up lots of examples. Searching for head badges for sale on eBay can turn up lots, too. If you're using downloaded images, save them to your hard drive so you can use them in PowerPoint.

Here's the first picture I'm going to insert in my sample project:

The background has been successfully removed from the Fuso head badge photo. Now I can position it where I want it in my collage.
From this point, you can follow the same procedures to add more pictures, adjust them, position them, and keep going until you get the collage you want.

Final Step - Save Your Picture:

As long as you want to keep adding photos, and making adjustments to your work, just keep saving the PowerPoint presentation as you normally would. But when it's completely done, you'll want to save it differently than the default setting. You want a picture file - not a presentation/slide-show.


I've used the same basic procedures outlined above to make other "composite" pictures for the blog. Here are a couple others:


It's also worth noting that I added arrows and text to my instructional screenshots above using the same basic tools in PowerPoint, then saved them as .JPEGs.

Okay - not exactly a typical Retrogrouch post, but it may prove useful. Thanks for indulging me.
Posted by Brooks at 8:25 AM