It was the Bike Boom of the early '70s, and bike use at college campuses was . . . well . . . booming. With so many young cyclists taking to the streets, and probably annoying the drivers who up until that point believed they owned the roads, public safety officials declared that "the anarchy of the cyclist can be afforded no longer!" (*) So at Stanford University, in coordination with the Urban Bikeway Design Collaborative (UBDC), the solution was to create a new kind of super hero -- not a hero who could fly, or melt steel with lazerbeam eyes, or anything resembling superhuman powers. No, this super hero would be found astride a 10-speed bike, and would subdue his adversaries with a relentless onslaught of safety admonishments and, occasionally, a well-aimed freewheel cluster.

He would be forever known as SPROCKET MAN!

Sprocket Man came to life in 1974 through the pen of Louis Saekow, a Stanford pre-med student who had no formal art training but enjoyed drawing comic book characters. Working as a file clerk at an urban research institute on campus, Saekow was given the opportunity to draw some cartoons on bike safety for a newsletter. That eventually became the Sprocket Man comic book, published in 1975 by the Stanford Dept. of Public Safety and the UBDC. (Stanford University)

Within a couple of years, the Consumer Product Safety Commission (CPSC) acquired the rights to the Sprocket Man comic book, and began distributing it nationally. The CPSC had begun regulating bicycles in 1976, and I believe they first issued their version of the comic in '78. In the CPSC editions of Sprocket Man, there is a legalistic-sounding preface that explains (or perhaps defends) the commission's right to regulate all bicycles sold in the U.S., including some language that probably alienated many serious adult cyclists. For example, it states that the CPSC's "regulation applies to nearly all bicycles that are toys or other articles for use by children (but may also be used by adults)."

In fact, it was the CPSC's definition of bicycles as "toys for children" that more than anything angered the more outspoken bicycle advocates of the time. There seemed to be no distinction to the regulatory commission between bikes for children and bikes for adults. John Forester, who first published his Effective Cycling in 1974, was one of the harshest critics of the CPSC's bicycle regulations, dismissing many of them as ineffective and misguided -- predominantly created and mandated by people who had no understanding of bicycles, or cycling. Interestingly enough, however, Forester's Effective Cycling is listed in the comic book's bibliography as one of the sources for the Sprocket Man's safety advice. 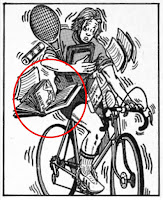 The Sprocket Man comic book would go through a couple of minor re-makes over the years, but the majority of the text and most of the drawings were simply re-used throughout a couple of decades. Fun fact: In Saekow's drawings for the original Stanford version of Sprocket Man, he managed to slip in some little visual jokes. In one, he had a hapless cyclist dropping a bunch of books -- one of which, if you looked closely, was Playboy Magazine (a PDF of the original can be found HERE). When the CPSC took over the comic, that little detail got left out.

Another version of Sprocket Man was re-issued by Raleigh Bicycles - probably as a giveaway to their customers to promote safety. Again, most of the comic's artwork stayed the same - though some of the text was changed to reflect Raleigh's commitment to safe riding. For example, Sprocket Man says "Your Raleigh Dealer has asked me to share some of Sprocket Man's SAFE CYCLING SURVIVAL SKILLS with you." By the way, Raleigh must not have looked closely at some of the pictures, because their issue of the comic includes the "Playboy" image mentioned above.

In the '90s, the CPSC put out a slightly revised version of the comic - but this time, updated (rather awkwardly) to include the religion of helmet use (full PDF file).


In 2002, the Stanford Department of Parking and Transportation Services went back to Louis Saekow (who gave up on his medical ambitions to become a graphic designer) to create a newer, updated Sprocket Man safety campaign - combining some of the original '70s artwork with newer, more modern graphics: 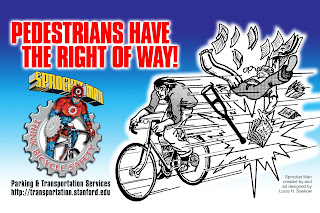 And now, the latest news in the saga is that, at long last, Sprocket Man, like all the other super hero franchises, is finally being turned into a movie for the big screen. And much to the dismay of hard-core Sprocket Man fans, Ben Affleck has been tagged to play the bike-riding superhero. 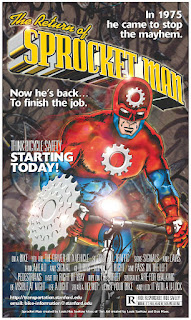 OK - that last part is complete B.S., but the poster is real.

So, he's not the Hulk, or Captain America, or Iron Man. He doesn't fly, and he doesn't seem to have any actual super powers. And when you get right down to it, he's even a little bit of a safety nerd. But for bicyclists, Sprocket Man may just be the only bike-riding super hero we're ever going to see.