Does anybody out there remember freewheeling cranks? Shimano introduced such a system in the late 1970s that they called Shimano FFS - for "Front Freewheel System." It had a freewheeling device built into the crank-bottom bracket interface. Combined with an extra stiff rear freewheel (Shimano called it a "friction freewheel") the system was designed so that the chainrings and chain would continue to move when coasting, thereby allowing the user to shift gears while coasting. The late great Sheldon Brown referred to it as "a solution in search of a problem."


Apparently some beginning cyclists couldn't get the concept of shifting their new 10-speed derailleur bikes only while pedaling.

I can just picture them bringing their "defective" bikes back to the shop.

Customer: "There's something wrong with my new bike."
Bike Shop Manager: "Tell me about the problem."
Customer: "This thing won't shift when I'm coasting."
BSM: "That's not how it's supposed to work. You have to be pedaling when shifting."
Customer: "But why doesn't it work when I'm coasting?"
BSM: "That's not how it's designed. The chain has to be moving to get from one cog to the other. The chain doesn't move when you're coasting"
Customer: "So what are you saying? You can't fix it? I want a refund!"
BSM: . . . . (grrrrrrrrrr) . . .

Marketed along with Positron, Shimano's early attempt at indexed shifting, it seemed that the company was convinced that beginning cyclists were incapable of learning new skills - and the thing that kept so many American adults from riding bikes was basic incompetance.

By the way, the FF System utilized the "friction freewheel" on the rear hub as a safety measure. The rear freewheel was much stiffer than the front one, so the chain would continue to move when coasting - but the chain could still be stopped if something got caught in it, such as clothing, or a shoe, or someone's hand, etc.

FFS was made available on some models by Schwinn (the Suburban comes to mind, but there were others), and some department-store bicycles. The system was dropped in the early '80s because it was a bust - heavy, complicated, and ultimately unnecessary. And of course, repair/replacement parts were only available for a couple of years afterwards. I knew a guy who had a FFS-equipped Schwinn that totally seized up and I remember how dismayed he was when he was told it couldn't be fixed -- the only repair was to replace the entire crank, bottom bracket, and rear freewheel with "normal" parts.

Big surprise - but freewheeling cranks are BACK!

The Easy Shift crank is made for the latest 1x11 "Enduro" MTB drivetrains. Like the old Shimano FFS, it has a freewheeling mechanism built into the crank, but it is paired up with a true fixed-gear 11-speed rear hub. No "friction freewheel" here - so don't get anything caught in the chain, 'cause you'll lose it. Granted, that's the case with any fixed-gear drivetrain, but just sayin'. 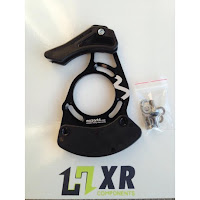 Instead of being marketed for incompetent neophytes, the Easy Shift is claimed to be great for "technical" MTB conditions. But it's unclear just how much abuse the system can take. It's apparently necessary to pair the Easy Shift crank with a combination "bash guard" and "chain guide" -- to protect it from impacts below, and to keep the always-moving chain from derailing off the chainring.

I still question whether such a thing is necessary, but if anyone out there decides they can't live without it, being able to shift when coasting doesn't come cheap. The Easy Shift crank and bottom bracket alone are listed at about €450. Adding a chainring, the fixed-gear 11-speed hub, and the bash-guard/chain-guide takes the price up to €995. Based on current exchange rates, that's probably about $490 - $1090. Phew!

Don't be surprised if Shimano gets the last laugh by re-introducing their own FFS. I can see the ad tagline now: