What's In The Bag?

I was reading a memoir post on the blog Mid-Life Cycling about a beloved old messenger bag. The blogger, Justine, wrote about her days as a bike messenger in New York, and her "Original Globe Canvas" messenger bag, purchased from the maker in Chinatown where all knowledgeable messengers bought their bags. 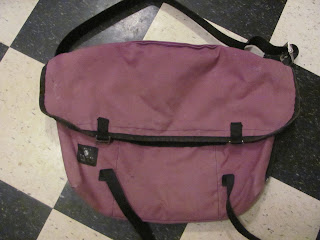 Reading that brought back some memories for me about my own messenger bag, which in all likelihood was very similar - and except for the color, maybe even the same.

No, I never worked as a bike messenger.

Growing up in Northeast Ohio, that wasn't a job that many of us even knew existed. But I quickly learned to appreciate the classic messenger bag as a wonderful and versatile item, especially in the days before I learned to appreciate large saddlebags and panniers that were to be carried directly on the bike. Hey - in those days, it was all about racing bikes with me, and the lighter the better. Bikes with racks, fenders, and all that baggage were strictly for old guys. Now I'm one of those old guys.

When I was a college student at Kent State, I had a friend who was from Brooklyn who had spent some time as a bike messenger in NYC (Did any kid with a bike in New York NOT spend some time as a bike messenger?). Leo was a real character, and he rode all over Kent on his track bike - a Japanese Lotus brand machine with a pink pearl paint job - and his well-used taxi-yellow messenger bag. Oh, and I shouldn't leave out the omnipresent grimy cycling cap. He quickly became something like a legend around Kent, especially with our group of bike nuts.

Being that there probably hadn't been a velodrome anywhere near Cleveland, Akron, or Kent since well before WWII, track bikes like Leo's were a rare sight in our area. It didn't take long before a bunch of guys in our group caught the bug and started searching high and low to find some classic track iron - or failing that, converting an old bike-boom 10 speed to a fixie. Remember that this was probably 1985, so it wasn't yet exactly "the-thing-to-do" that it would later become. 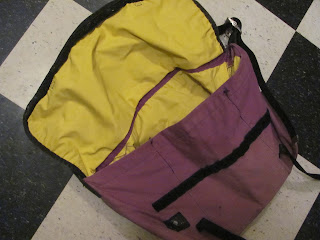 At that time, as much as I'd wanted one, a track bike or fixie wasn't something I could afford. But there was one other thing of Leo's that I knew I'd have to find: The messenger bag. Thick, heavy canvas, fully lined inside with vinyl - it could hold so much, and keep it dry even in a downpour. Nowadays, messenger bags like that are practically a fashion accessory, and the internet has made them incredibly easy to come by. But back then, such bags were as rare in our area as fixed-gear track bikes were. I remember that year when the fall semester was wrapping up, and everyone was getting ready to head home for the winter break, I gave Leo some money and asked if he could find me a bag like his while he was back home. Any color as long as it wasn't yellow (I didn't want people to think we were trying to be twins or something).

When we got back to school in January, Leo brought me my bag. Purple canvas, with yellow vinyl inside. The label read "Globe Canvas Products - New York." Leo told me it came from a cramped little shop in Chinatown, and the place where most messengers got their bags. The bags came in different sizes, I was told, and mine was the biggest they had. It was perfect.

I didn't have a car back then, so I rode my bike for most of my basic transportation in and around the college. I used that bag a lot. Of course I used it to carry books and such for my classes - but it proved far more useful than that. For one thing, it was huge. Big enough to carry 2 medium-sized bags of groceries, so I used it for my runs to the grocery store. It could hold a good-sized load of laundry, too, so I'd fill it up and ride to the laundromat. Any time I'd go somewhere for an overnight stay, or even visiting home on a weekend, my purple messenger bag also became my main piece of soft-sided luggage. 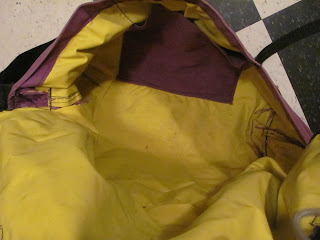 Actually, as a piece of luggage, I still use it today. Any time we fly somewhere, the purple messenger bag ends up being my carry-on bag. I can throw it over my shoulder, keeping one or both hands free to carry other things, and making it easy to get through the airport. It's plenty big enough to carry my laptop, some books or magazines, snacks, other essentials for traveling. Plus, I can access the contents easily without removing the bag from my shoulder, and the big pocket inside is a great place to keep passports and boarding passes. Lastly, no matter how much I might stuff into it, the bag can still be stowed under the seat on any airline.

When I ride to work, I usually use my bike with racks and panniers (and fenders, and lights, etc. . . ) but now and then, when the weather is warm and dry, and the mornings are lighter, and I don't have to carry as much with me, I will choose to ride one of my un-laden, racier bikes for a fun change of pace. When I do that, I use my messenger bag to carry what few essentials I need for the day. And when my daughters and I make our weekly trip to the library, we load all our books into the bag, sling it over my shoulder, and off we ride together.

I've had this bag for about 30 years now, and apart from a few stains here and there, it's held up remarkably well. The purple messenger bag has always carried a lot of stuff, and after 30 years, it also carries a lot of memories.
Posted by Brooks at 11:37 AM