I just got the chance to read the latest book from the Horton Collection, Shoulder to Shoulder: Bicycle Racing in the Age of Anquetil (VeloPress, 2015). The book is a fantastic collection of photos from the hip and swinging decade of the '60s, when the changes that were sweeping almost every other aspect of culture--from music, art, fashion, politics, and even social norms--also altered the world of bicycle racing. And, as the title suggests, nobody seemed to epitomize the decade more than Jacques Anquetil. In many ways, Anquetil's style and panache were the perfect transition from an older "golden" age, to a modern era dominated by television and full-color magazines that made sports athletes into larger-than-life heroes. 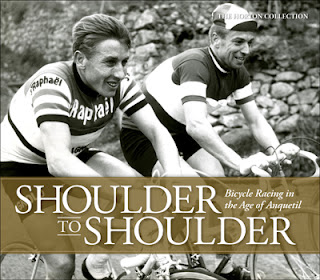 "With a comb in his pocket, his glamorous blonde wife by his side, and an unyielding will backed by blazing speed, Jacques Anquetil became cycling's leading ambassador as the sport left behind the post-war era of Fausto Coppi to embrace the promise of the freewheeling sixties," says VeloPress in their notes on the book.

Shoulder to Shoulder shares a similar look and format with the previous Horton Collection volume I reviewed, Goggles and Dust, which was a wonderful collection of racing photos from the '20s and '30s. However, where Goggles and Dust was overwhelmingly a photo album with very little in the way of captions or commentary, Shoulder to Shoulder includes a bit more text to accompany its fabulous photos, including a full index of notes at the back of the book.

Lest anyone think the book is solely about Anquetil, let me make clear right away that the book also includes many photos of other great riders from the era - including Rik van Looy, Raymond Poulidor, Tom Simpson, and many others. And like Goggles and Dust, they are beautifully restored photos, and many of them very rare.

The wonderful black and white images capture many action-packed race scenes, scenes of suffering, and scenes of celebration. There are lots of bloodied faces and riders slogging over mountain passes completely awash in mud and slush. There are also many candid moments, some of which are downright whimsical--Tom Simpson playing the bagpipes, for example, or Anquetil autographing a female fan's leg. Shots of cyclists raiding local fruit markets and cafes to grab a bite to eat during a race stage are a fun reminder that professional bike racing wasn't quite yet the polished, organized affair it would later become.

As if to underscore that eras in bicycle racing are typically defined by a single notable, dominant racer, the book begins and ends with photos that can be seen almost as "passing the torch" from one era to the next. One of the first photos in the book depicts a handshake between Fausto Coppi and a still-teenaged Anquetil in 1953. At the end of the book, a similar photo depicts Anquetil with Eddy Merckx in 1969 -- Anquetil's last year as a professional racer, and the year that Merckx effectively stamped his name on the sport's next era. It's worth noting that all three men held the Hour Record in their own careers, with Anquetil beating Coppi's 1942 record in 1956. And of course Merckx took the title in 1972, as well as being the first racer to match Anquetil's record of five Tour de France wins.

Shoulder to Shoulder is a beautiful collection that any serious cycling fan should check out. Brett and Shelly Horton should really be thanked for preserving so many rare and iconic images and artifacts from cycling's past, and putting them so lovingly into the hands of bicycle racing fans across multiple generations.
Posted by Brooks at 12:36 PM