The Politics of Riding a Bike

On Monday, I had featured a photo of Martin Luther King Jr. on a bicycle. Until I got it in my head to search for a photo of MLK on a bike (basic Google image search, by the way), I had no idea such a photo even existed. I'd never seen one before, but it turned out to be a good hunch -- there were multiple copies/examples to be had.

Since then, I got to thinking about other important people, world leaders, etc., and bicycling. And in searching for pictures, I was surprised - yet not so surprised - at the interjection of politics into the discussions that accompanied them.

Take this photo of President Obama on his bike: 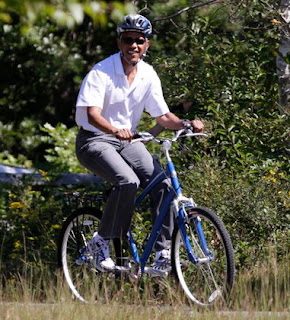 I saw this picture, along with several others like it, showing Obama out for a ride with his wife and kids. I was immediately struck with thoughts of how much I love my rides with my own daughters. What could possibly be a better depiction of the notion of "family values" than a family riding together?

So how did the President's vocal opponents portray the images?

"Many Americans, including myself, are humiliated today," said T.V. and talk radio host Sean Hannity back in 2014. "Take a look at the photo comparison of our commander-in-chief. There he is juxtaposed with Vladimir Putin [describes a photo of Putin swimming in frigid waters] . . . so you got a picture of that juxtaposed next to Obama on a bicycle in Martha's Vineyard with a goofy helmet riding his bike."

Hannity added, "For the first time in my adult life, I am humiliated for my country."

I guess Hannity never saw this photo, or the dozens more just like it:

Then again, Hannity may have unwittingly given us all an air-tight excuse for his asinine criticism as he continued in his rant.

"Look, I'm going to be honest. As a parent, did I make my kids wear that goofy helmet while they were learning to ride a bike and wear that goofy helmet? Yeah. But when I grew up all I did was ride my bike. I never wore a helmet. Not once, not one time. And guess what? I had newspapers and guess what? I went over the handlebars, and my friends pushed me into cars. We pushed each other into cars. We survived. I mean, it's embarrassing."

So if I interpret that correctly, Hannity is admitting to brain damage from crashing a lot without a helmet. It explains a lot.

Speaking of Putin, the Russian president doesn't just swim in frigid waters and pose for staged shirtless horseback rides (or photo-ops, if you prefer):

Then there's this guy, Secretary of State John Kerry: 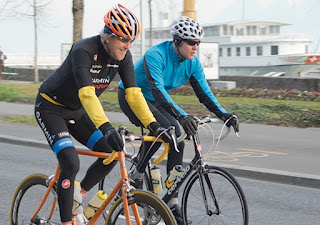 Kerry is a long-time cyclist who, from all reports, can really hammer on a bike, despite his septuagenarian status. In a Wall Street Journal article last May, Jonathan Vaughters said of the Secretary of State, "Kerry is the real deal--fit, fast, confident. If he raced in his age category, he'd be one of the top riders in the U.S."

Anyhow, after crashing on his bike and breaking his leg last year, there was this response from presidential candidate Donald Trump:

"I will stop Iran from getting nuclear weapons. And we won't be using a man like Secretary Kerry that has absolutely no concept of negotiation, who's making a horrible and laughable deal, who's just being tapped along as they make weapons right now, and then goes into a bicycle race at 72 years old, and falls and breaks his leg. I won't be doing that. And I promise I will never be in a bicycle race. That I can tell you."

OK - never mind that (not surprisingly) Trump was playing a bit loose with the facts. Kerry was just out for a ride, not racing. And President Bush notably suffered a couple of crashes while out on his bike rides (2004, crashed while riding around his ranch, and 2005, crashed into a British police officer during the G8 summit) but I don't recall anybody suggesting that his bike riding (and crashing) somehow made him unfit for international negotiations.

I'm really trying not to let a political bias dominate this piece. Yes, I'm definitely biased - but the only bias I want to show here is a Pro-Bike bias, not a political one. Obviously, people of any political stripe can enjoy a bike ride. It's true that as a Democrat, I was never a fan of President Bush, but I absolutely love the fact that he could often be seen enjoying a bike ride. But for some reason, when politics enters into a discussion on bikes and bicycling, it seems that the anti-bike bashing overwhelmingly gets directed from the right to the left.

I mentioned in a post a couple years ago (Bicycles: Public Enemy?) that we have somehow become a target in a Red-State/Blue-State culture war. Bicyclists get portrayed by some (very vocal) opponents as "elitist." People who advocate for bicycle infrastructure get dismissed as starry-eyed, immature hippies. Arguing for more bicycle commuting accommodations will quickly get a person labeled as some kind of Socialist. Meanwhile, flag-waving American "patriots" can profess their love for a scary totalitarian Russian president who poses shirtless on horseback, while they ridicule a bicycle-riding (and helmet-wearing) moderate Democrat president and his secretary of state. And when you can demonstrate that a conservative president also enjoyed his bike and always wore a helmet, the point would almost certainly be met with dumbfounded silence. "What's your point," would likely be the response. 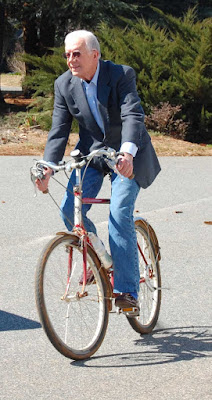 Then there are those who almost seem to transcend the political quagmire. Consider somebody like Jimmy Carter, who as president was ridiculed by conservatives for actually suggesting that Americans practice conservation. But in the years since leaving the White House, the man has taken on a much greater status in people's eyes regardless of political affiliations. Building houses for the poor. Negotiating peace between historic enemies. Working hard to eradicate diseases in Africa. Carter was awarded the Nobel Peace Prize in 2002, and when he's gone, his legacy will almost ignore the fact that he was once an American President, focusing mainly on everything he did afterwards. Seriously -- I can imagine eulogies for Carter someday that leave people with the impression that he went directly from farming peanuts in Georgia to eradicating guinea worm in Africa, without mentioning the White House once.

And how cool is it that he rides a Rivendell? Fantastic!

By the way -- Carter, Obama, and Martin Luther King have something else in common, besides appearing in this blog on bicycles. All three have Nobel Peace Prizes. How many of the critics can make that claim?
Posted by Brooks at 12:20 PM