If you're a regular Retrogrouch reader, it's unlikely that this would apply to you, but there is another carbon fork recall in the works. Recently, ENVE and the CPSC announced a voluntary recall of the ENVE Road 2.0 disc brake fork. Apparently the forks, which are made in Vietnam, have the potential to break just above the disc brake mount. So far, they've had a handful of failures of the forks, though there are no reports of injuries at this time. 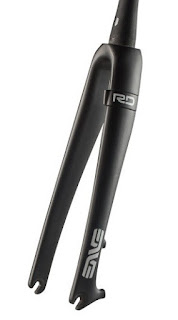 If you, or someone you know has a bike with one of the forks, CPSC says they "should immediately stop using the recalled forks" and contact ENVE for a full refund or a substitute model (recall form HERE).

Many things about this recall say that it's unlikely that any retrogrouches would be affected. "Carbon Fork," "Disc Brake," "Tapered Steerer," and "$540." But you might have a friend who won't (or shouldn't) be riding until they get this thing sorted out. If that's the case, please be nice and let them borrow a solid, reliable steel bike until they can get their new forks from ENVE.

Of course, there's always the risk that they won't want to give your bike back.
Posted by Brooks at 9:10 AM