Why Are Drivers Such A-holes?

If you're a cyclist who spends any time riding on the road, whether it's a lot or a little, you've probably had some pretty negative encounters with drivers. Any ride on the road can quickly involve some uncomfortably close-calls as impatient drivers take life-threatening risks with our lives -- passing too closely when there are oncoming cars, cutting us off, running lights or stop signs, left-hooks, right-hooks, and don't forget the jerks who feel compelled to blast their horns, or scream epithets and obscenities as they go by. Some of that animosity comes out when those drivers aren't even in their cars. Read the comments section of any internet article about car-bike interactions (on second thought, don't read the comments) and just feel the hatred seething from the drivers. 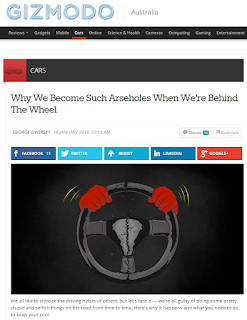 It turns out that there's a lot of research into the psychology of driving -- some of it going back to the early days of cars -- and an awful lot of it points to the idea that getting behind the wheel of a car can transform even the mildest and most gentle person into a raging tyrant and raving lunatic.

I was reading an article on Gizmodo on the subject which takes a fairly straightforward look at the driving rage phenomenon and provides a range of support for the findings, as well as giving some advice for people who feel that driving rage building up (advice that, unfortunately, most car-centric drivers out there will never read or follow). The article is only about driving and focuses mainly on bad driving behavior and driver vs. driver aggression. Bicycles are not mentioned, but it seems to me that everything the article says applies even more strongly when the question is driver vs. cyclist aggression.

One thing the article mentions is how cars make people feel anonymous. Out on the road, we don't focus on the people. We see a large mechanical object -- a covering, a box, or a shield -- instead of the person inside it. "The feeling of anonymity can sometimes mean that we behave in ways that we wouldn't otherwise because we're less likely to be held accountable," says Erica Slotter of Villanova University.

It seems to me that the effect of anonymity is something that presents itself in a lot of ways, and not always inside cars or on the road. Take for example the aforementioned comment sections on so many internet articles. It's so common to find people blaming victims and threatening violence -- even potential murder or at the very least manslaughter -- against the next cyclist they see on the road. But also, note the tendency to refer to bad actions on the road being done by "cars" not "drivers." We probably all do it. "That CAR cut me off," we'll say, as opposed to "that person" or "that driver." It's a tendency that I'm noticeably aware of even as I'm writing this, and I'm finding myself unusually conscious of saying things like "driver vs. cyclist" as opposed to "car vs. bike."

The article goes on to connect that sense of anonymity to a psychological effect known as "deindividuation." Citing 1950s research by Leon Festinger, a social psychologist from MIT, it describes how people "dissolve as individuals when they become part of a group." More importantly, humans have a tendency to de-individualize people in another group. I think that aspect is particularly relevant when applied to drivers of cars vs. cyclists and other vulnerable road users.

Again, the article doesn't mention bicycles, but notice how relevant the following passage is to us cyclists. "Driving exaggerates our in-group/out-group sensibilities. We love to slot things -- including people -- into groups. Groups we belong to -- whether it be the people sitting in our car, a group of vehicles belonging to a certain type, or even cars stuck in a specific lane -- are referred to as the in-groups and they tend to be preferred and favored. Conversely, groups that we don't belong to, or don't want to belong to, are called out-groups, and they're often mistrusted."

So it becomes almost a question of "us vs. them." People on bikes are "other" or "different" and not individuals who deserve respect. I think that also explains the fact that drivers often seem blind to other drivers who run lights after they've changed to red, or roll through stop signs, etc. -- but when they see a cyclist run a light, suddenly their perception is that ALL cyclists run lights.

The article goes on, "Instead of seeing individuals, we simply see a type of car, or an endless stream of automobiles. This, in combination with perceived anonymity, gives us the sense that we won't be held accountable for our actions. It frees us from guilt of our behaviors, and gives us the freedom to commit acts that violate our social and personal norms."

Another thing mentioned is the increase in road fatalities as a result of aggressive driving. "Statistics compiled by the U.S. National Highway Traffic Safety Administration show that 66% of all traffic fatalities are caused by aggressive driving, and that males under the age of 19 are the most likely to exhibit road rage." Some of these "aggressive driving" behaviors include weaving/cutting, speeding, hostile displays, tailgating, improper lane usage, no turn signal, and erratic braking.

As cyclists, we've probably all seen at least some of these kinds of things directed at us -- and one could probably add a few others that are more likely to involve us than other people in cars. Passing with too little clearance and when it's unsafe to pass, trying to push a cyclist off his/her bike, or even throwing objects from the car at the cyclist.

My own experience would also suggest that peoples' addiction to their mobile technology is another factor. It seems to me that we have become so accustomed to instant gratification, instant results -- the whole world at our fingertips right now -- that we become less patient. Add to that the power of social media and the like to heighten a tendency toward self-centered behaviors.

Remember the "old days" on the internet, when you'd click on a website, or a link, or what-have-you, and then have time to go make a sandwich while you waited for your dial-up internet connection to load the page? Now think how frustrating it is today to even wait a couple of seconds for the same task to take place, and then apply that frustration to being on the road.

Cars today can go so fast, so smoothly and effortlessly, while the occupants are surrounded in comfort and convenience, bathed in the music of spectacular sound systems, and totally insulated from the world outside. The comfort of even the cheapest modern car would outshine the most expensive luxury car of a couple of decades ago. Out on the road, of course a cyclist is the "outsider." Why can't we just go as fast as we want to? When traffic slows down, and drivers are stuck in a long line of cars, they see that guy on a bike up ahead. HE'S the reason. HE'S SLOWING US DOWN! Never mind that even after they get past the cyclist, they're still stuck in a long line of cars -- there's a solidarity with the other cars. They're the in-group. The cyclist is "other" and logic and compassion go out the window.

I don't suppose there was a lot in the Gizmodo article that I hadn't heard before (my old psychology classes seem to come to mind) or at least suspected to be true, but it was an interesting read -- particularly when that information is viewed from the perspective of a bicyclist.