It's probably not widely known that the U.S. had a bicycle derailleur and component industry in the years shortly after the Great American Bike Boom -- long before the CNC'd boutique parts craze that began in the 1990s. Nor is it likely that many people know that the now-defunct mega corporation Beatrice Foods was behind it.

Beatrice Foods? Their slogan used to be "You've known us all along" because they were the parent company of all kinds of brands and products that were a big part of everyday American life: Peter Pan peanut butter, Butterball turkeys, Hunt's tomato products, Tropicana orange juice, and much, much more. In addition, they also were the parent company of numerous non-food-related companies such as Airstream campers, Samsonite luggage, Avis car rental, and others. In the 1970s, probably due to the bike-boom, they must have decided that bicycle components were a good bet.

According to Frank Berto's bicycle history The Dancing Chain, the Illinois-based Beatrice got started in the bicycle component business in the early '80s, but according to the Disraeli Gears site, it seems that the start may actually have been earlier than that - at least by the mid '70s. Their line of derailleurs and other components bore the name Excel, although the name Elgin also enters into the history.

There have been a lot of companies and products that carried the Elgin name -- many of them based in Elgin, Illinois: watches, sewing machines, and bicycles, among others. Elgin bicycles were a brand owned by Sears (based in Chicago, you may recall) and sold at least up until WWII. In the 1970s, many Sears Free Spirit-branded 10-speeds were using derailleurs with the Elgin name, and made in the USA. Both Elgin and Excel derailleurs were made in the same Illinois factory, and the same basic derailleurs could apparently be found marketed under either brand name.

Unlike the made-in-the-USA CNC'd derailleurs of the '90s, which were extravagantly expensive creations hewn from colorful anodized aluminum, the Excel and Elgin derailleurs were bottom-of-the-barrel stamped steel copies of verging-on-obsolete French Huret and Simplex units. The Excel Dynamic was a cheap, less-refined clone of the Huret Allvit (except that it was almost impossible to adjust, and had menacing springs poking out dangerously), and the model known as the Elgin American was a copy of the old Simplex Prestige, complete with plastic pivot bodies. There were also front derailleurs that worked somewhat like old Campagnolo Valentino units, but cheaply stamped out of steel and shrouded in plastic. Together, these derailleurs were used on Sears Free Spirits and other American department store bikes in the late '70s. Big surprise there, right? 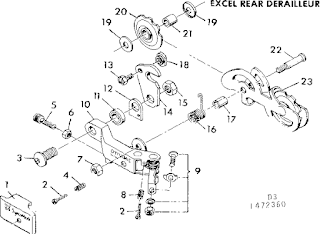 In the early '80s Excel also began importing Italian copies of SunTour derailleurs. Made by Cambio Rino, the rear derailleurs looked remarkably like SunTour Vx and Cyclone models. Called Excel Gruppo Rino, they didn't hide the group's origins. The Rino-made derailleurs are a real curiosity because they are faithful SunTour knockoffs -- including SunTour's patented slant parallelogram, even though that patent wouldn't expire until the end of 1984. It is unclear whether Rino (and by extension, Excel) faced any legal action for violating the patent, or if they paid some kind of licensing fee to SunTour for the rights to use the design. One can search for the answer to that question and find nothing definitive either way. Nevertheless, I've never seen one up close, much less used one, but I have no doubt that they worked just fine. Why wouldn't they? While the imported Rino components made up the company's high end, their American-made French-inspired steel derailleurs continued to be sold as the budget line.

Also in 1983, Excel introduced the Cambiogear, an expanding chainwheel crank that shifted gears without a derailleur. I wrote about that one back in January. Made of graphite-reinforced plastic, it offered 16 sequential gears with a 3-to-1 range. Unlike the Rino-made derailleurs that made up the company's "high end" products, the Cambiogear was made in the USA. The product was only available for about one year before disappearing. Judging from the advertisements in the bicycle magazines (it seems that they stopped appearing sometime after '83), Excel must have gone under not long after. That was it for American-made derailleurs for the rest of the decade.

The '90s brought a resurgence of American bicycle component makers, mostly using CNC technology - like Joe's, Precision Billet, Paul's, White Industries, and others. Most of those companies are still in business today, though few if any of them are making derailleurs anymore. And of course there is now SRAM which has made serious in-roads against Shimano and Campagnolo -- but while that company may be U.S.-based, as far as I know the derailleurs and most other components are made in Taiwan.

I'm not implying that Excel's American-made components were in any way good -- far from it -- but in the '70s and '80s, Excel was about the only game in town for American-made bicycle derailleurs for the burgeoning "10-speed" market. Yes, Schwinn had components with their own name on them, but most of those were made overseas and re-branded. Otherwise, any bicycle parts made in the USA were primarily for kids bikes and heavyweight cruisers. But any discussion of American bicycle components wouldn't be complete without including Excel.
Posted by Brooks at 9:02 AM