Here in Akron we're having an early heat wave. It's unusual for us to be hitting the upper 80s in mid May like this, but that's where we are. We're expecting some days in the 90s next week. Heat like that can make a bike ride a little less enjoyable, but there's one way to beat the heat - get out on the road early while it's still cool.
While the rest of my family was still in bed taking advantage of a chance to sleep in, I got out shortly after sunrise this morning - on what promises to be a very nice - but hot - Sunday. It was partly cloudy with a bit of hazy sunshine, patches of mist in some of the lower-lying areas in the valley, and temps in the mid 60s.
I hit the road on the Sequoia and was once again reminded of what a well-sorted-out bike it is. Its handling is reassuring and predictable. It soaks up rough pavement handily. The '80s vintage SunTour drivetrain works so well, it convinces me even more certainly that much of the "innovation" of the past 30 years has been "new for the sake of new," but not real improvements. 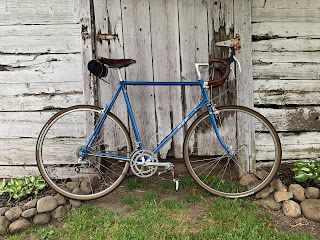 I stopped for a picture by the farm market in the heart of the national park. Activity at the farm hints that their season opening is just around the corner.
The little farm market has corn fields scattered all around the valley floor, and I could see workers plowing and sowing one of the fields. Others fields are already sprouting with this summer's crop. As this summer promises to take us more "back to normal" after the pandemic, I can imagine the market (which is always a popular stop for visitors to the park) will be busier than ever. Seeing the work going on around the farm fills me with anticipation for summer.
By the time I was climbing the long hill back home, I could already feel it getting hotter - but I'd beaten the worst of it. After a cool shower, I could relax outside on the porch with a cup of coffee while I'd wait for the rest of the family to rise.
Posted by Brooks at 9:25 AM