If you're like me, when it comes to bicycle saddles and comfort, you've probably found yourself thinking, "the only thing that could make me more comfortable would be if I had a great big wedge sticking up my backside." 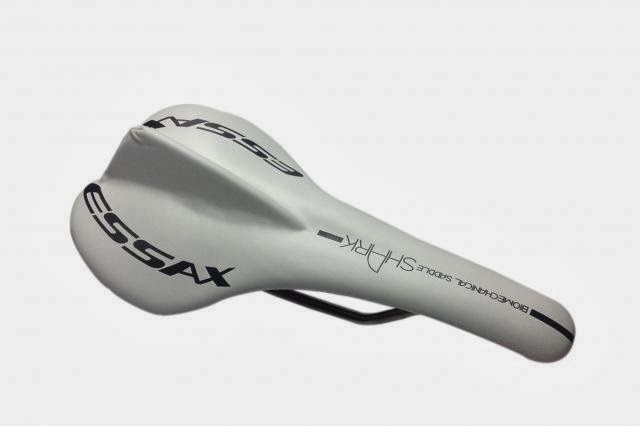 Well, your wait is over. The Essax Shark saddle is here. Designed by Spanish fit specialist Jon Iriberri, the Spanish saddle company claims that the fin helps keep the "sit bones" properly located on the saddle, preventing side-to-side rocking, and keeping the knees better aligned. Supposedly, the fin is not perceptible if one is located properly on the saddle, and if one can feel it, they are sitting on it wrong.

This saddle is getting a lot of attention on other bike blogs. Here's a quote from a BikeBiz article: Iriberri claims, "It's a biomechanical design that aids the alignment of the pelvis in the saddle, greatly reducing the rocking motion that can cause so many problems while pedaling." Just to show how misinformed I must be about bicycling, I always thought that rocking motion on the saddle was caused by having the saddle too high.

According to Essax, even though traditional saddles might feel comfortable (you thought you were comfortable? You fool!), those saddles encourage uneven weight distribution that actually decrease performance. Not only that, but the company claims that the wedge actually makes you faster because it keeps you positioned better on the saddle for optimum efficiency. They are apparently in the process of trying to get UCI approval for the unusual design, so hopefully the pros and the people who emulate them will soon be able to give themselves speed wedgies. I, on the other hand, can wait.

Taking a completely opposite tack, Vince Marcel, a professional chiropractor, has decided that supporting the sit bones is exactly the wrong approach. What we need is a big hole. The result: The Infinity Seat. 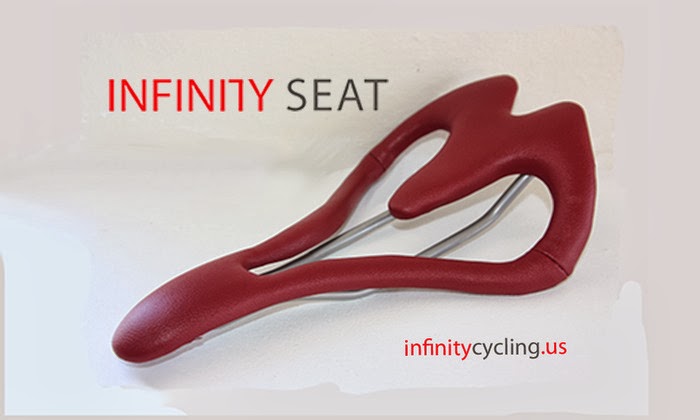 Marcel claims that the rider's weight needs to be distributed to the muscle mass of the buttocks, leaving the "sit bones" suspended by the body's natural shock absorbers.

If I had to guess, I'd say the inspiration was a toilet seat.

The Kickstarter campaign for the Infinity Seat was fully funded, far surpassing their goal. Among the claims for the Infinity Seat are: One size fits all; No break-in period; Lighter than most saddles (at 205 grams); and Innovative design. Personally, I'm skeptical of all but the weight claims (although on that note, it's about the same weight as the speed wedgie design shown above).

BikeRadar's initial tests of the saddle found some issues with the design. "There is indeed a noticeable absence of pressure under the sit bones -- and no pressure on the soft tissue in between -- but we found the pressure transferred to the wide edges of the saddle, which didn't feel comfortable pedaling. Also, when rolling the hips forward into an aero position, most of our weight was shifted almost fully onto the soft tissues on the nose of the saddle." Without testing the saddle personally, I can say that BikeRadar's assessment matches up with what I would expect given just a close look at the design. Anyhow, the designer's response was curious. "Marcel says this design is not aimed at the high-mileage enthusiast, but instead at the average person who would like to hop on a bike every now and then and not feel pain."

Designing saddles for "the average person" who only hops on a bike "every now and then" is a pretty dubious goal. People who ride bicycles that infrequently are almost invariably drawn to the worst possible saddles because their perceptions of comfort are badly skewed by their lack of experience. To imply that these occasional riders have different needs than high-mileage cyclists is ridiculous.

Interesting thing, the fact that the product is called the Infinity "Seat" instead of "Saddle" is very revealing. Serious cyclists use the term "saddle." Sheldon Brown explained the difference really well in this article. According to Brown, the distinction is that a seat, like a chair, is something you sit on, and is designed to support the person's entire weight. A saddle, on the other hand carries only some of the person's weight, while some is also carried by the legs, arms, and hands. Inexperienced cyclists expect a bicycle saddle to feel the same way as a comfortable chair, which is neither possible, nor desirable (except on a recumbent). 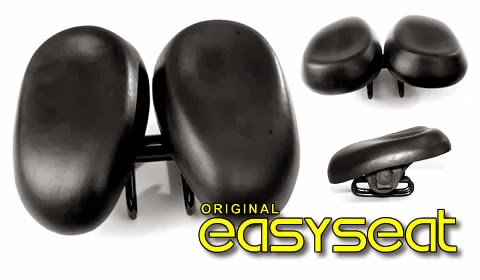 Both of the saddles above are being touted as "innovative." Without a doubt, they are, but that is hardly an endorsement of their actual effectiveness. Flipping through old cycling magazines, one can find ads for previous "innovative" saddle solutions. I'm reminded of products such as the "Easy Seat," which was heralded as the innovative solution to uncomfortable bicycle saddles dating back at least to the early 80s, if not earlier. The Easy Seat is still available today (along with a few imitators, probably), and I'm sure there are people who swear by them, but my guess is that few people put any more miles on bikes equipped with such saddles than they would on a traditional one.

The thing is, I really believe that more saddle comfort problems are caused by poor saddle position than by the saddle itself. Saddles too high or low, too far forward or back, or tilted too much one way or another, are prime culprits. Cheap saddles with too much padding (or too soft of padding) can also be a factor. Some people might swear by saddles with "pressure-relieving" cutouts in the middle -- which became all the rage after those overblown impotence stories started circulating some years back (those stories were a marketing person's dream, I tell you). But my reasonable guess is that those cutouts are unnecessary for most people, and do no harm for most of the rest. I also believe that for at least some people (a small minority, perhaps), they may in fact even be worse.

Of course, every rider's particular anatomical needs are unique, and there is no one saddle that's right for everyone. That said, for me, there is no better saddle than a Brooks B-17. The width and shape is probably about right for most people right out of the box, and they pretty quickly form themselves to the rider's anatomy, making them get even more comfortable in time. Stories of prolonged break-in time are more myth than reality, at least for the B-17 and many other Brooks models. Some might find they prefer a model slightly narrower, and some riders (and some styles of riding) may demand something a little wider. But again, the all-leather saddle has great benefits for comfort, and a B-17 is a pretty good place to start. If it's positioned properly, set at the right angle, etc., I find it supremely comfortable whether I'm out for a quick spin, or a century ride.

The Shark speed-wedgie saddle, or the Infinity Seat, like most other bike saddle "innovations" over the years probably have little more going for them than the fact that they are new. I really believe that whether one is a high-mileage cyclist, or someone who only rides occasionally, it's really hard to improve on a classic, time-tested leather saddle. These so-called innovations are mostly nonsense.
Posted by Brooks at 8:27 AM