In my last post, I delved into the fashion trends of wheel sizes -- but it occurred to me that when it comes to wheels and tires, there can sometimes be a lot of confusion. Some of that confusion goes back a long way, stemming from the fact that for decades there were few international (even national, for that matter) standards for things like bike rims and tires. Unfortunately, despite some efforts to standardize, the bicycle industry today continues to add completely unnecessary confusion in the name of marketing.

Just look at the term "29er," which I referred to extensively in the last post. It's the same rim size as the 700c road wheel -- the only difference is that it is made for mountain bikes and uses huge, usually knobby, tires. Why the different name? Because it's NEW and it's catchy, and can be sold as a new trend.

Another example of unnecessary confusion in the name of marketing (and which I'll describe here, but I refuse to use) is the latest trend in calling the recently resuscitated 650b size "27.5" or the somewhat catchier "27five." This one is becoming increasingly popular in MTB circles, whereas road bike makers using the size seem (so far) to be sticking with "650b." 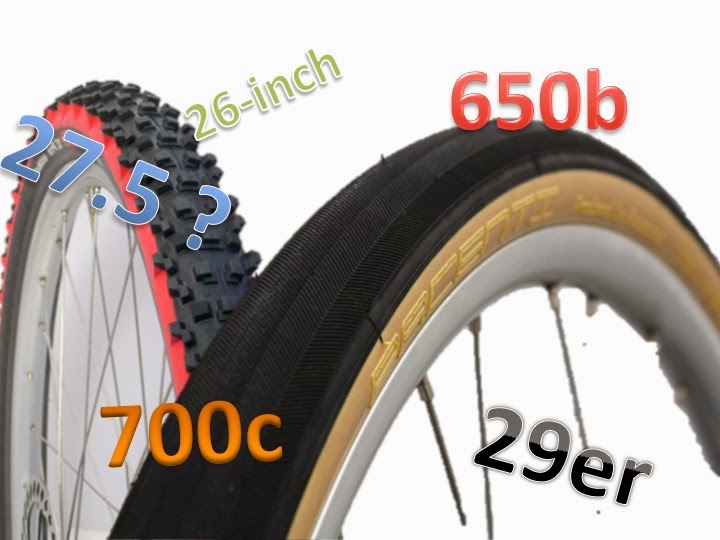 Some history: For decades, every country that made bikes had their own standards and designations for rim and tire sizes. In some cases, individual manufacturers -- especially those with enough mass and clout to do what they wanted, like Schwinn and Raleigh -- would even set up their own sizing systems. Often, these different designations would seem similar, but would in fact be completely different. For instance, there are numerous tires and rims listed nominally as "26-inch" yet they are NOT interchangeable, even if the listed measurements are the same! Sheldon Brown's website has a ton of info on this, including full charts listing the various sizes and their nominal designations.

Originally tire sizes were supposed to correspond to the total outside diameter of the tire and the width. These could sometimes be rendered in fractions, such as 26 x 1 3/4, or 27 x 1 1/4; or in decimals, such as 26 x 1.75. Perhaps ironically, those sizes listed in fractions were typically NOT interchangeable with those listed in decimals -- even if mathematically they should be the same. 26 x 1 3/4 was not the same as 26 x 1.75, for example (Brown's Law of Tire Sizing). Even worse, a Schwinn tire listed as 26 x 1 3/8 was not the same as an English tire listed as 26 x 1 3/8. Madness!

The French system for designating tire and rim sizes was, at least originally, based on the total diameter of the tire measured in millimeters, such as 700 or 650. The width of the tire was designated with letters A through D -- with A being the narrowest and D being the widest, although for the most part, the width designations have lost most of their significance. Tires marked 700c, for instance, can be as narrow as 19mm, or as wide or as 55 mm, and the resulting wheel diameter might be nowhere near 700 mm.

The best, least confusing way to designate tire sizes is through ISO size. The International Standards Organization was founded in 1947 and has worked for decades to cut through the mass of different national standards for a huge range of industries. The ISO system for bicycle wheels is based on the rim's bead seat diameter measured in millimeters. A tire's ISO size will be rendered as the tire's width followed by the bead seat diameter (a typical road bike tire might be 28-622). Tires with the same bead seat diameter should generally be interchangeable, although swapping tires with large differences in width can sometimes cause some issues -- so it's not a universal fact. Some common sense should apply.

Common Sizes: Here are some common tire sizes one will find today for road or mountain bikes, shown in their typical designations, followed by their ISO bead seat diameter size:

26-inch. There have been lots of wheels and tires called "26-inch" over the years, including older American "middleweight" bikes, old British roadsters, and American "balloon tire" heavyweights -- and none of them are the same. Today, however, the name 26-inch (followed by decimals -- such as 26 x 2.2) usually refers to the size commonly used on most of today's mountain bikes. ISO 559.

700c. This came from the French designation and is the most common size for road bikes today, whether racing, or touring, and even cyclocross and some hybrids. Most racing bike tubulars (aka "sew-up" tires) are this size. Road bike tires might be listed as 700c x 25, or 700 x 32 (sometimes without the "c"). The latest thing is to put fatter tires on this size rim and call it "29er." ISO 622.

650b. Was once a popular French tire size for utility use, loaded touring, or tandems. A few early mountain bikes used it, but it fell out of use and faded away for a while. Recently resurrected for both road and mountain bike use. A nice, large-volume road tire might be labeled as 650b x 40. ISO 584.

27-inch. On the verge of extinction. This used to be the most common size for lightweight road bikes in America, like old 10-speeds. During the 1980s, it was increasingly supplanted by the European 700c size -- first on high-performance bikes, and eventually on touring bikes as well. The two sizes were close enough that most frames made for 27-inch wheels could be fitted with 700c with only minor adjustments -- but they were not directly interchangeable between tires and rims. 27 x 1 1/8 or 27 x 1 1/4 were typical sizes. Tires are still available for older bikes, but choices are shrinking. ISO 630.

There are still a few other oddball sizes out there (like 650c or ISO 571 -- sometimes used on road bikes for smaller riders, or on time-trial bikes, etc.), but those I've listed above are the most common. There used to be many, many more, but a lot of those are gone or are fading away -- only found (sometimes with great difficulty) to keep old vintage bikes going.

Marketing Madness: Not content to let sanity take hold, the bicycle industry is determined to keep confusing the consumer by persisting in the use of outmoded size designations, and to keep coming up with new designations for existing sizes and marketing them as something "new." Yes, they now print the ISO size on the tires (sometimes you have to look for it), but in the marketing and the most prominent labeling they still use the less precise, more confusing designations.

29er. As already stated, this is the mountain bike version of the 700c size (ISO 622), used with extra large, usually knobby tires. Adding to the confusion is the fact that cyclocross tires, and the new "gravel bike" tires are starting to get pretty large -- some are available as wide as 40 mm or more. But those tires are still designated as 700c. The 29er tires are a little larger still, like 50 - 55 mm. Except they won't label them in millimeters. Nope. 29ers list the size in inches. 29 x 2.0 or 29 x 2.2. At what point does a really fat gravel bike tire become a fairly narrow mountain bike tire? When it changes from metric to English measurements, of course.

Stop the Madness: ISO designations are the best way to keep things straight. What we need to see is increasing usage of the ISO sizes in tires, whether they are for road or off-road use. I can see no reason why road bike wheels should be listed in millimeters, while mountain bike wheels are measured in inches. Also, the ISO bead seat diameter is a much more reliable measurement than the overall diameter of the tire (which changes with the width of the tire), and a better predictor of tire/rim compatibility. Also, wheel size needs to be treated as a function of proper bike fit -- not a marketing ploy -- and using ISO sizes would help to discourage some of that nonsense. More prominent placement of the ISO sizes on tire labels, in the advertisements, on manufacturers' websites and spec sheets, and in the catalogs, will help to minimize confusion. It just makes more sense.
Posted by Brooks at 10:11 AM