In the City of Bikes: A Book Review 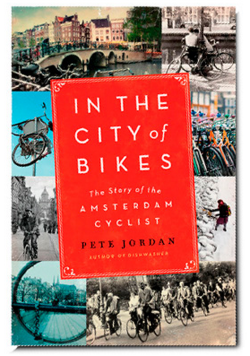 Moments after arriving in Amsterdam, Pete Jordan slung his duffel bag over his shoulder and walked out onto the streets of the bustling city. Stopping to admire some 17th century architecture, he suddenly heard a bike bell ring out. "Then, from behind, a bicycle slammed into me. . . I stumbled a few steps before righting myself. I turned and saw a young brunette cyclist in a short skirt . . . she scowled, then muttered 'Klootzak!' and sped off." Two or three more near misses made Jordan realize quickly that he was not on a sidewalk, as he had assumed, but rather was walking in the middle of the dedicated bike path. It was an ignoble introduction to the famously bike-centric city, and an amusing introduction to Jordan's memoir In the City of Bikes: The Story of the Amsterdam Cyclist. Jordan's book is enjoyable not only as a memoir, but also as a history of bicycling, and a narrative tour of a city that must seem overwhelmingly bicycle-powered.

In the City of Bikes tells Jordan's personal story, of how he came to Amsterdam with the intent of staying for a semester abroad, to study ways to make American cities more bicycle friendly -- but he quickly falls in love with the city and makes the decision to stay, along with his new wife, Amy Joy. Both Pete and Amy discover the joys of a city that lives in the saddle and moves with the pace of its many bicyclists.

In addition to the many amusing and sometimes thought-provoking personal anecdotes of Jordan's memoir -- from searching the city for a stolen bike (bike theft is apparently a major industry), to the opening of his wife Amy's own bike shop, and the birth of their son who would be raised on two wheels -- the book also explores the history of bicycling in Amsterdam. Readers will enjoy learning about the fietsjongens (bike delivery boys), the zwijntjesjager (bike thieves), and the Nazi occupation, during which many of the citizens' bicycles were confiscated by the occupiers for the Nazi war machine. Of all the things taken or destroyed by the Nazis during the occupation, it was the theft of the bicycles that seemed to be the most "personal." According to Jordan, "Give me back my bike!" is still a rallying cry among the Dutch generations later.

For anyone interested in living by bike -- for basic transportation, commuting, shopping, and more -- Jordan's book paints a picture that is both hopeful and sobering at the same time. Bicyclists in many ways dominate the scene in Amsterdam, but from what one can gather from the book, it would be difficult to replicate the same kind of environment here in the U.S. Despite what we may hear or believe about Amsterdam's bicycle culture, Jordan points out that actual pro-bicycle policymaking is a fairly recent phenomenon there. For many years, there had been efforts to put limits on cyclists, including bans of cycling on certain streets, speed limits for cyclists, bans on riding double (or "dinking" -- a favorite pastime of young lovers, and a common Dutch courtesy), the imposition of bicycle taxes, and more. What keeps the bicycling culture so vibrant in Amsterdam is not the efforts of lawmakers, but rather, the overwhelming number of people who ride, and the fact that their collective "mass" makes them a force to be reckoned with. (It was that same steadfastness of the cyclists that proved to be such a challenge for the occupying German forces.)

What makes Jordan's depiction sobering is that one might rightly infer that all the bicycle advocacy efforts we can muster here in the U.S. won't likely make any of our cities into an "American Amsterdam" when cyclists even in the most bike-friendly communities only make up a small percentage of the traffic. In The Netherlands, car ownership is expensive. In the U.S. it is cheap (or at least perceived to be cheap -- but it's all subsidized in other ways). In the U.S., cars are also a status symbol, much more so than in Amsterdam -- the perception here is that if one can afford a car, why would they ride a bike? (riding a super-expensive carbon fiber dream machine is different -- such bikes are rarely used for actual transportation, but are rather seen as expensive toys).

One of the things that really comes through in the book is how bicycles have become such an integral part of the Dutch cultural identity, and nowhere is that more apparent than in Amsterdam. The Dutch even had bicycling royalty! If one reads much about world affairs, they might have seen that The Netherlands, like many European countries, has seen a lot of immigration -- particularly from Islamic cultures in the Middle East. Sometimes there are problems with assimilation, and there was a notable situation involving the murder of filmmaker Theo Van Gogh (great-grand-nephew of Vincent Van Gogh). Jordan's book looks at Van Gogh's murder and the surrounding cultural conflict from the standpoint of the bicyclist. As he points out in the book, many of the immigrants are not cyclists. Many come from places where bicycling is not a regular part of life -- or if bicycles are used, it is only by those who are on the bottom rungs of the social ladder. The women are either not permitted to ride bikes, or encouraged not to. The men want cars to display their rising status, and these ideas make it difficult to fit into the national identity. Of course, there is more to it, and I don't think Jordan aims to over-simplify a serious and complex issue -- but it does raise an interesting cultural point. It was just one of many interesting angles explored in the book.

I really enjoyed reading In the City of Bikes. Jordan has written a good narrative with some fascinating history. Anyone interested in learning about one of the world's most notable bicycling cultures would likely enjoy it as much as I did.
Posted by Brooks at 7:39 AM