Everybody knows disc brakes are better. They stop faster. They have more stopping power. They are unaffected by rain and mud. They don't fade like rim brakes. Everybody knows it, so c'mon Retrogrouch, just accept it and shut up about them already.

Everybody knows it. Any time the only proof or support of a point is that "everybody knows it" then it seems to me that the proof is lacking and I start to wonder who the nebulous "everybody" is. And why are they so easily persuaded?

I've brought up the problems with discs many times in the past, so I won't bore readers with a bunch of details here -- suffice it to say, most of the claims that "everybody knows" are questionable and debatable. (Want some details? See HERE and HERE)

Everybody knows it? I'm wondering. Last month I published a quote I had found from a project leader at Cannondale regarding the likelihood that the UCI will soon approve disc brakes for competition. He said, "In the industry you can hardly find a brand that will not support that. First of all, a lot of them are bike freaks themselves so they can't wait to have that, and second, everybody realizes it's a huge improvement of the riding experience, so for them it's pure money because there's another reason why they should buy a new bike." (note: "everybody realizes. . ."). That's the industry -- the manufacturers. What about the riders themselves? The teams, and the mechanics? 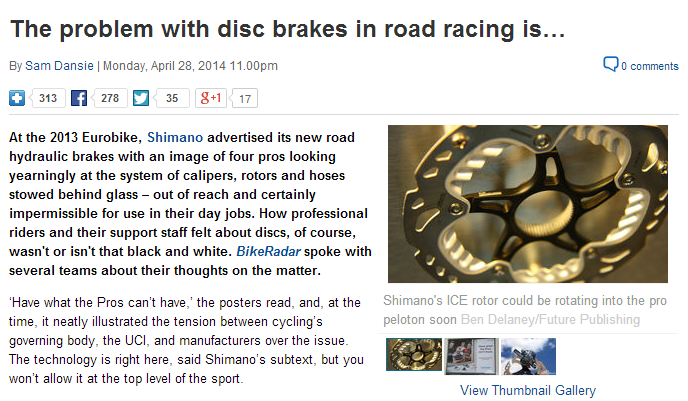 Yesterday I saw this article in BikeRadar. According to the article, "If you speak to interested parties around the pro circuit -- the mechanics, technical managers and even team liaison managers (the brand guys who hook up teams with sponsored kit) -- enthusiasm about RDBs (road disc brakes) is decidedly lukewarm."

The article goes on to quote Stefan Christ, head of development at BMC. "In general we know they're coming, but especially at the team now, even if the UCI introduces the rule . . . to convince the teams is much, much more difficult." (I almost titled this post "Christ is Skeptical of Disc Brakes" based on that quote, but decided to show some restraint)

Wheel change issues, compatibility problems, and safety are all concerns for the teams and their mechanics. "There are question marks about disc size and components," said BMC's Christ. "Right now, a neutral service mechanic needs two simple pieces of information to get a rider on the way again: is it SRAM/Shimano or Campagnolo? And is it 10- or 11-speed? The extra layer of complexity RDBs would bring could mean slower wheel changes."

Another person interviewed for the BikeRadar article, Lotto-Belisol team mechanic Geert Rombauts, also shared concerns. "Even now the news that I heard is that on a long downhill the discs are heating up, so you have to go to big discs -- like 180 mm -- and then it's going to be a little more difficult because the discs are not always straight." He added, "If we're going to use a 140 mm disc, maybe other teams are going to use 160, 180 mm disc and then it's going to be a mess with all these different disc sizes."

Team mechanics are also looking at problems that come with the various axle standards. Some brands are working with thru-axles, while others are sticking with quick release skewers.

Equipment managers and mechanics are also concerned about the added complexity of disc brakes. Chris D'Alusio, director of advanced research at Specialized, was quoted saying, "I called our teams and equipment mangers and they were all pretty afraid of the complexity -- the bleeding, the storage, the usage, the compatibility, and the wheel changes."

I've brought up the issue of heated brake discs several times in this blog, and it turns out I'm not the only one with concerns. The head of Team Sky's technical operations, Carsten Jeppesen, was quoted in the article bringing up another point about heated rotors that never even occurred to me. "The disc gets warm and in a crash could you protect the rotor somehow? You have to look at that because if it's warm and sharp as a knife it's dangerous." Yikes.

Nevertheless, there is nobody among the teams -- not any among those quoted in the BikeRadar article -- who thinks that road disc brakes won't be coming (and for non-pros, obviously, they're already here). "You can't stop moving forward, you can't stop the industry and the fans," said Jeppesen. And as BMC's Christ added, "All the manufacturers want it." But I found it interesting to see that it isn't just Retrogrouches like myself who have questions about these things, despite what the industry marketing people would have us believe.