After looking at the history of the Red Zinger/Coors Classic bicycle race -- America's unofficial national tour of the 70s and 80s -- I promised I would delve into the 1985 film based on the event: American Flyers. Written by Steve Tesich, the bicycle racing fan who also wrote the Oscar-winning screenplay for Breaking Away, and directed by John Badham, who earlier directed Saturday Night Fever, American Flyers certainly raised bicycling fans' expectations but didn't quite live up them. I'd call it a "must see" for anyone who really likes bicycling, cheesy 80s movies, or Kevin Costner -- but on the whole, it isn't exactly a classic piece of cinema. Nevermind that I own it on DVD. I'm a self-admitted bicycle geek, so I don't really have any choice, do I?

American Flyers is about a bicycle racer and sports physician, Marcus Sommers (played by an excellently mustachioed Kevin Costner), who tries to reconnect with his less-focused, aimless younger brother David (David Grant), who has dropped out of pre-med to study "Eastern Philosophy and cowboy movies. The yin, the yang, and the bang-bang." Marcus convinces David to join him to race in "The Hell of the West" stage race in Colorado, which is the thinly veiled Coors Classic (albeit reduced to just three stages). But to keep the movie from being strictly about bike racing, there is a complication designed to bring out some family drama. From the description on the back of the DVD: "While training and racing together, each fears the congenital ailment that struck down their father (a cerebral aneurysm) could suddenly strike one of them." The characters are rounded out by Marcus's girlfriend, Sarah, played by Rae Dawn Chong, and Becky (Alexandra Paul) whom the group picks up along the way and becomes David's love interest. Of course, there needs to be a "bad guy," and that would be Muzzin, aka "the Cannibal" (Luca Bercovici) -- a former teammate of Marcus's, and Sarah's ex-husband. Oh yeah, there's also a stereotypical 80's-movie Russian named "Belov" who is supposed to be an Olympic champion cyclist, but looks more like a wrestler.

Much of the racing footage in the film was shot on location at the Coors Classic -- some real race footage was shot during the 1983 race, while other scenes were re-created in and around the actual race locations with actors and extras. According to the film's producer, Gareth Wigan, Category 2 and 3 racers from Colorado were selected as doubles and extras, being paid about $100 a day for a period of up to six weeks. In some of the re-created race scenes, the filmmakers were able to get right into the action with special camera mounts -- on handlebars, wheel axles, and the backs of saddles. The real and staged footage were then combined and integrated fairly effectively -- though sharp-eyed viewers can spot "Coors Classic" and "Hell of the West" logos alternately interspersed throughout the film.

Although there were cycling doubles for the principal actors in the film, Wigan said that about 95% of the riding in the film was done by the actors. "They had four weeks of physical training and learning bicycling under Specialized's Bill Woodul," said Wigan, in an interview for the Coors Classic Official Magazine. "After the first ride they did, only two and a quarter miles, they collapsed. They worked, they dieted, they did weight training, they did race training, they worked to the point that when we would shoot a twelve hour day, they'd still go out for an hour ride in the evening." Luca Bercovici (Muzzin) reportedly crashed at one point during filming, breaking his collarbone, but continued on with the shooting for the next couple of weeks with a brace. Impressive.

One scene in the movie where the training paid off was a scene where Kevin Costner's character gets a puncture during the race and Rae Dawn Chong performs a pretty inspiring wheel change. According to the producer Wigan, Chong worked for two weeks with Bill Woodul learning how to change a wheel. "In one shot -- there's no cutting, there's no futzing around -- Rae Dawn comes up with the wheel, takes the old wheel off, throws it away, puts the new wheel on, and it's eight and a half seconds! She could get a job with Specialized changing a wheel like that."

Well -- that's some of the good. In what ways did the film not live up to expectations? Where to begin?

For one thing, I'd put it down to some one-dimensional and less-than-believable characters. Take the Russian, Belov. As already mentioned, he looks more like some kind of wrestler than a cyclist. He's essentially no different from any Russian portrayed in any 80s movie -- or anything made in America since Rocky & Bullwinkle. And when was the last time anyone saw a top-level cyclist with a full beard? (apart from Dave Zabriskie in the off-season, that is). Belov is supposed to be the 1980 Olympic gold medalist, but looks completely unnatural on a bike. The film's other foil, Muzzin, makes it pretty clear that Belov's Olympic victory was only because the Americans didn't get to compete in Moscow (then again, that is the exact reverse of the claim some people make about some of the American victories at the '84 Los Angeles games).

That then leads me to Muzzin -- the "Cannibal." OK, anybody who knows bike racing knows that the Cannibal was Eddy Merckx, so it would have been nice if they had come up with something original. Ironically, Merckx makes a cameo in the film as himself, so maybe they just figured their predominantly American audience wouldn't know the difference? Muzzin has a pretty huge chip on his shoulder, seems to have no compunctions against cheating, gets off on attacking the press (verbally berating a female reporter in one scene, and attempting to run down a photographer in another), and spends half of his scenes growling or roaring -- Rrraaauuuugggghhhhh! On the other hand, Muzzin also gets some of the best cliché lines in the movie. "Enough of this Sunday stroll. Let's hurt a little bit!" That's my favorite.

Despite all the efforts to make the cycling in the movie believable, American Flyers still falls a bit short. For instance, early in the film David tells Marcus he rides "a lot -- 30, 40 miles a day." That might be a lot for an aimless college student who watches lots of cowboy movies, but it is not the kind of mileage that makes for a world class bicycle racer. Yes, the two brothers train and ride much of the way between Marcus's home in Madison, Wisconsin (lots of great American cyclists came from the Madison area, by the way) and Colorado. And Marcus tries to impart some knowledge of race strategy to David along the way. But it seems awfully unlikely that this would be enough to take a kid who has never raced and prepare him to race against the best in the country and from around the world.

I sometimes read or hear criticism about the film for the fact that it seems to over-simplify bicycle racing, strategies, team dynamics, etc. -- but I won't level that against it. If the film focused enough on those aspects to satisfy hard-core bicycle racing fans, it would totally lose any other audience. But a scene near the end, I believe, gets pretty ridiculous (SPOILER ALERT: if you haven't seen American Flyers and actually want to watch it someday, skip the rest of this paragraph and screen shot!). When Muzzin and David Sommers are racing along the edge of a big cliff, and Muzzin tries to force David off the edge -- I'm sorry -- but that just seems beyond belief, even for a guy wound as tight as Muzzin.
Add to those issues the fact that some of the family drama in the film gets a bit melodramatic, and the synthesized pop soundtrack is pretty cheesy, and you start to get the idea why American Flyers never became the beloved bicycling-themed movie that Breaking Away was. Still, I enjoyed it -- even for its clichés and other flaws.

Some wonderful-awful scenes and lines:

Some trivia about the film:

The pit bull, Eddie, is named after Eddie Borysewicz, or "Eddie B," who was the prominent coach of the U.S. Cycling Team.

The "team van" that the brothers use for the race really is an old 7-Eleven team van, and Muzzin rides for the 7-Eleven team (albeit with only four members). In fact, most of the teams depicted in the film are meant to duplicate real teams of the time to help ease the integration of "real" and "re-created" race footage.

As mentioned, Specialized provided a great deal of technical support and training for American Flyers. They also provided bicycles and equipment. The bikes that the Sommers brothers race on are Specialized Allez SE bikes -- which back then were classic-styled lugged and brazed steel bikes built in Japan. They mostly had SunTour components. Another scene has a person riding rollers on a Specialized Expedition touring bike. 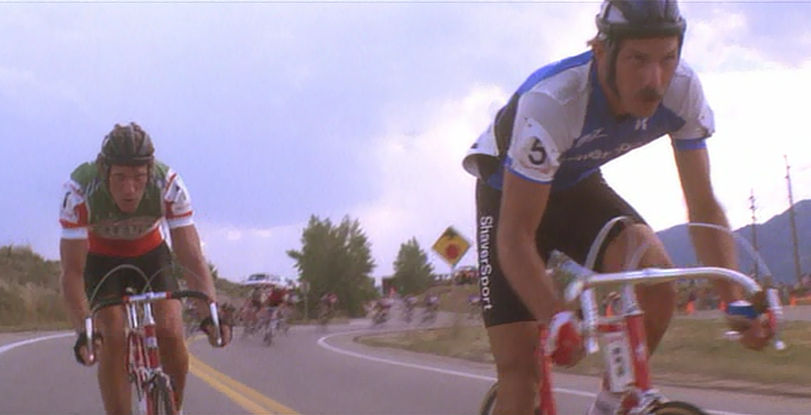 Well, there you have it. There aren't many bicycle-themed films available for viewing, but American Flyers is one of them.